It’s no secret that country music is often considered a male-dominated genre, but this year’s CMT Awards proved that female artists are killing it, too.

Some of country’s most popular female artists, like Miranda Lambert and Kacey Musgraves, were oddly absent from this year’s festivities. Despite that, the CMT Awards proved to be a big night for several ladies in country music. Check out some of the best girl power moments of the show. 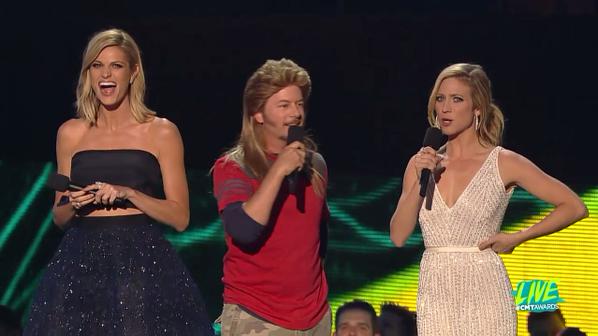 1. Females hosted the show for the second year in a row — and nailed it

As hosts Brittany Snow and Erin Andrews pointed out early on in the show, this is the second consecutive time that women have led the ceremony. Last year, Kristen Bell hosted it solo and though we missed her this time around (Bell has been a staple at the CMTs for a while now), Snow and Andrews did a great job taking over. Their bits were funny, creative and unexpected (Joe Dirt even made an appearance!). We can only hope all-female hosts remain an ongoing tradition at the CMTs. 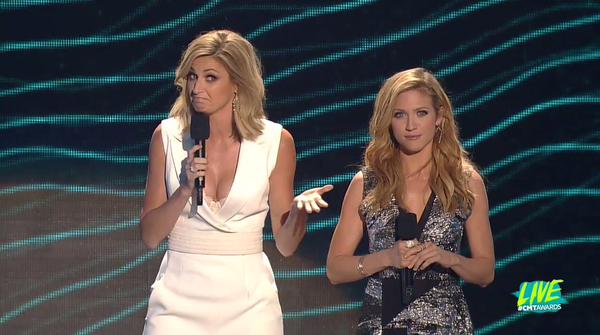 2. Everyone totally called out the sexism in country radio

Speaking of Snow and Andrew as hosts, one of my favorite moments of the evening was when they took a jab at Keith Hill, the overseer of 300 country music radio stations, who recently spurred major backlash after saying country music radio should take “female artists out.” He also compared women in country music as “the tomatoes” of a salad. Snow wasn’t afraid to mock Hill on stage, saying, “It’s the first time [the show] been hosted by a couple of tomatoes.” Sara Evans also later referenced the phrase, calling Snow and Andrews “two hot tomatoes.” 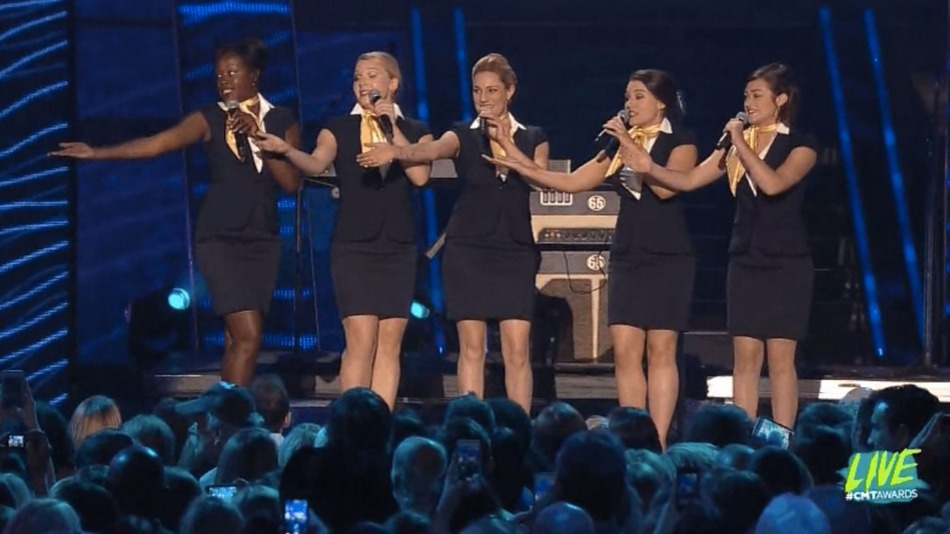 The host was not shy that Underwood is her favorite country singer, making it a running joke throughout the night. She Photoshopped her face on a few photos of Underwood and her husband. But my favorite gag? In a fun nod to her co-host’s participation in Pitch Perfect, she even had the Nashville Belmont Bellas sing an ode to Underwood. Hilarious? Yes, but mostly we just love that how supportive Andrews is of other female stars! That’s what I call female empowerment. 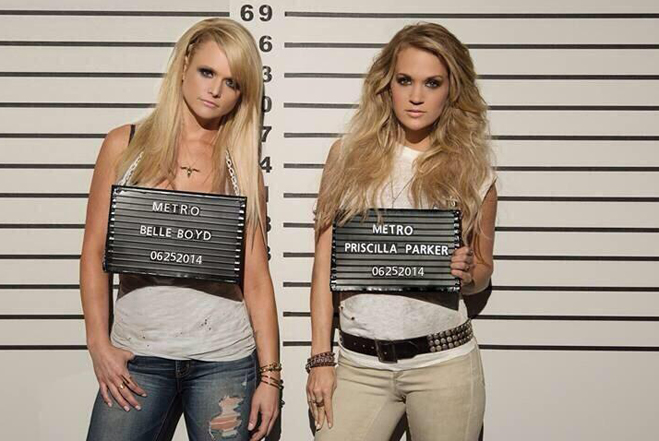 The fierce duo won the first award of the night, Collaborative Video of the Year, for their song “Somethin’ Bad.” Lambert wasn’t there, so Underwood accepted the award on her behalf. The two beat out other notable team-ups like Brantley Gilbert featuring Justin Moore and Thomas Rhett and Kenny Chesney with Grace Potter. 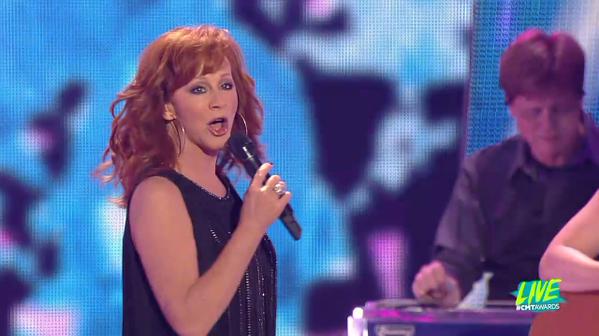 5. Reba returned to the CMTs stage

The country music legend brought her authentic twang to the awards show for the first time in 10 years. Her performance of “Going Out Like That” was amazing (as if we would expect anything less from her), and the whole crowd, including top artists like Underwood and Lady A, showed their appreciation by giving her a standing ovation. Does that sound like a tomato to you? 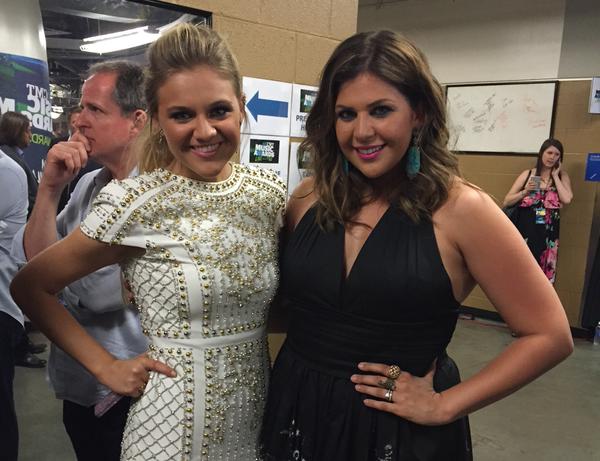 6. Up-and-coming female talent had the chance to shine

Every year, the CMTs allows rising artists to give brief performances of their recent singles on the Nationwide stage. This year, this group was absolutely dominated by young, talented female artists that are beginning to break out into the country music scene. Kelsea Ballerini (above left, with Lady Antebellum’s Hillary Scott), RaeLynn and Maddie & Tae all showed off their skills on the stage. 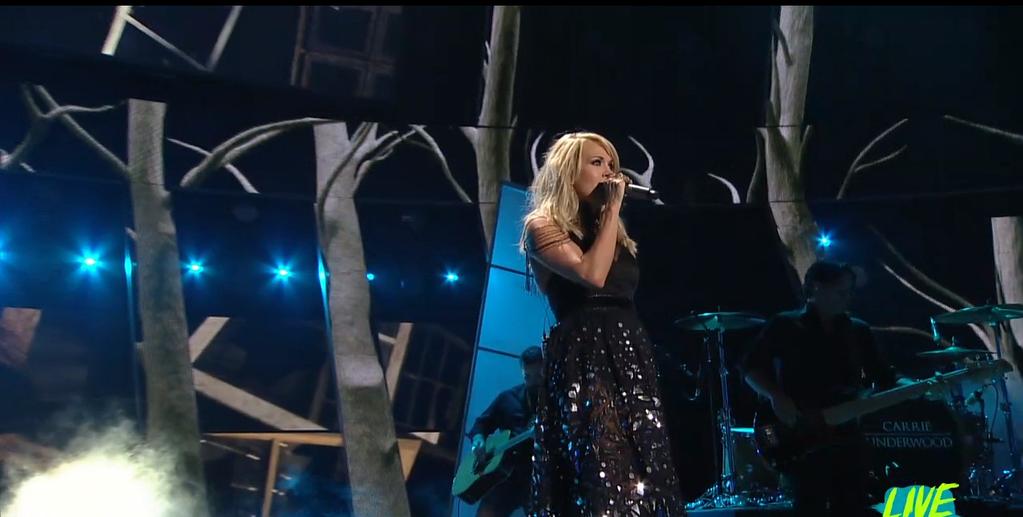 As the singer herself pointed out, this was the first awards show she attended since giving birth to her baby boy — and what a comeback it was. In addition to winning the Collaborative Video award with Lambert, she also took home Female Video of the Year and the biggest award of the night, Video of the Year. This marks her fourth time winning Video of the Year at the CMTs. As if the night wasn’t already big enough for her, she also performed her single “Little Toy Guns” for the first time on TV. Go, Carrie!