In her cover interview for the July issue of Elle, Amber Heard got frank with the magazine about the entertainment industry. Check out every single brilliant thing she got right in the chat — and a few less-than-brilliant ways the media has handled it.

1. “I have a fiercely independent spirit”

Translation: “I am Amber Heard. I was Amber Heard before I got married and I’m still Amber Heard after getting married.” The 29-year-old has 40 acting credits under her belt — and those had nothing to do with a husband. (OK, so The Rum Diary sort of had something to do with her now-husband. It’s the exception to the rule, though.) Point being: Heard wouldn’t need to underscore her independence if the line of questioning didn’t always seem to necessitate it.

2. “The thing that really scares me is the potential of losing my freedom”

How refreshing to know that Heard actively strives not to become the center of focus! Acting is her job and one that affords her the ability to see the world — but she doesn’t feel the need to be the world. “I never want for my life to lose the ability to transverse the world, with freedom and ease — the freedom and ease I have worked so hard to acquire for myself,” she says. A woman who has worked hard and made her own way so that she can experience the beauty life has to offer outside of Silicon Valley? We could use a few more of those.

3. “I feel like I’m constantly fighting against my exterior, or this exterior presentation of myself because of how I look or perhaps because of who I’m with”

Yes. Yessssss. I’m sure she’ll catch a little flak for this comment from all the haters who think it’s silly to feel sorry for yourself for being beautiful. Only that’s not what she’s doing. She doesn’t apologize for being beautiful. She isn’t sorry for her looks. She feels sorry that a woman who is beautiful often isn’t taken seriously simply because of her beauty. Or because of who she’s dating. Heard should be able to be beautiful and feel sexy without the fear she’ll forever be typecast as the hot blonde.

4. “I get a stack of scripts, like, once a month, and most of the time, you find these placeholder girls that are there to provide a bounce for the male character”

She adds, “So we know he’s funny because she’s serious and she’s mad at him. We know he’s strong because she needs saving. So really her job is to validate this personality trait of our hero or male.” Women are clearly capable of carrying a movie, Heard included. And you know what? Despite the line of bull movie studio execs want to feed us about how more women-centric movies are not selling, audiences want to see more women in movies and in lead roles at that.

5. “I mean, we’re trying to imitate life, and it seems to me a deeply saddening injustice that we are so uncreative and uninterested in developing representations of female life”

Because, here’s the rub: Often, when women are cast in lead roles, those roles are one-dimensional. Like Heard said, they’re simply placeholder roles to prop up the male leads: the hot yet unattainable one, the smart best friend, the vamp, the virgin, “the whore,” what have you. Women are complex. There exists within us all a duality that deserves to be seen — and, let’s be real, anything less is a lie.

How the media is botching Heard’s interview 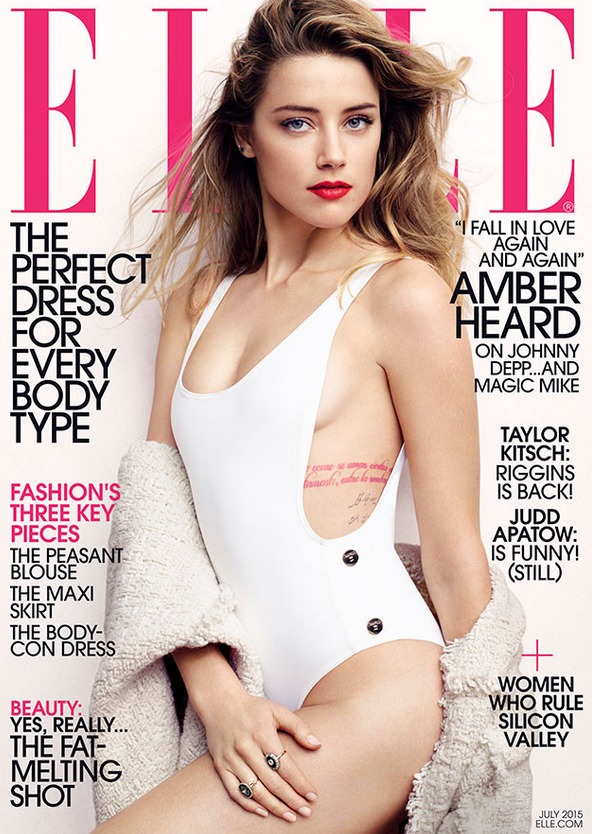 Heard, as you can very well tell, is provocative. She is smart and funny and, yes, fiercely independent. The arguments she makes in the interview are extremely relevant — and she isn’t the first woman to voice them. So why aren’t people listening? Why aren’t things changing? Well, a cursory Google search of the star’s name yields some definitive pointers:

“Amber Heard on her marriage to Johnny Depp”

You get the drift. That was the takeaway? Really? Countless articles catalog the few quotes Heard made in reference to her husband, which in all likelihood were made at the prompting of the reporter. Even Elle‘s cover copy defines Heard not by the empowering things she said, but rather by her marriage… and even her role in Magic Mike XXL.

So perhaps change isn’t being effected because we aren’t getting the whole story. Trite as it may sound, Heard — and women everywhere — should be heard.

For the full story, snag the July Issue of Elle digitally starting June 16 and on newsstands nationwide June 23.