Melissa McCarthy has previously spoken out against the unfair criticism she received based purely on her appearance, and she’s now opening up about why plus-size clothing shopping makes women feel inadequate.

During an interview with More magazine, McCarthy admitted she has a bone to pick with society and fashion retailers for the way that plus-size women are treated.

“People don’t stop at size 12. I feel like there’s a big thing missing where you can’t dress to your mood above a certain number,” she told the mag. “[Malls] segregate plus-size [women]. It’s an odd thing that you can’t go shopping with your friends because your store is upstairs hidden by the tire section. We’ll put you gals over there because we don’t want to see you and you probably don’t want to be seen.” 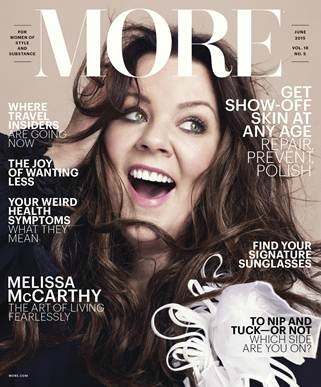 The Bridesmaids actress’s comments shed light on an important point, one that society needs to address to ensure that body acceptance for all shapes and sizes is being promoted fairly.

As for McCarthy, she’s learned to love herself and all her imperfections, and no longer feels pressure to be perfect.

“Pre-kids, I’d cook for 50 people. I’d have schedules, time charts. Being in my 40s, I can finally relax,” she confessed. “I’ve learned that you can order pizza and have your friends over, and it’s just as fun because nobody cares. Nobody wants to be around you if you’ve been up since 3 a.m. brining a chicken. I’ve let go of that quest for perfection.”

She doesn’t feel the need to be perfect, but McCarthy does have a strong opinion on equality. And her feminist philosophy is an inspiring one.

She said, “When I told my daughters there had never been a female president, they were like, ‘What! How is that possible?’ I have an overactive sense of justice. I want women to realize you don’t have to work for the company. You can run the company. I want the scope for them to be endless.” And we want that, too.