TLC has taken 19 Kids and Counting off the air after news that Josh Duggar molested multiple girls surfaced this past week.

And fans are furious, much to my absolute horror. 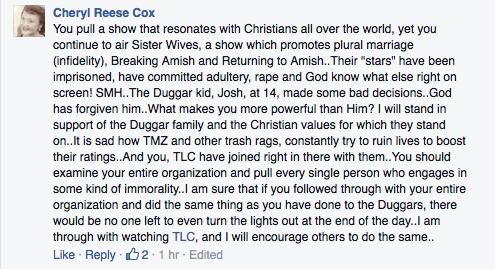 Not only did In Touch produce a 33-page report through the Freedom of Information Act that reported a 14-year-old Josh fondled the genitals and breasts of several girls in 2002 and 2003, sometimes forcibly, but Josh himself even confirmed the molestation news.

“I acted inexcusably,” Josh said in his confession statement.

Due to the statute of limitations, Josh was never prosecuted for the crimes. But his parents did send him to counseling after he confessed to the crimes at age 17. It’s unclear if there were more women between the ages of 14 and 17 or if the girls in 2002 and 2003 were the only ones.

But it doesn’t really matter.

Yes, he was a minor. And yes he made mistakes. But just because he apologized to God doesn’t mean he is a suitable member of society, let alone someone who should be displayed as an all-American family man on national television.

TLC has no choice but to remove the show because 19 Kids and Counting has lost all credibility.

In adult molestation charges of this nature, the conviction can be up to 20 years in prison, depending on the nature of the crime. This isn’t a crime that you just confess to and then brush off as an act that happened in the past. I applaud the Duggars for not approaching it that way. They’ve all admitted the gravity of Josh’s actions, including Josh himself. But that doesn’t make it right. And it certainly doesn’t make it acceptable behavior.

Not to mention, the news of these crimes makes Josh an absolute hypocrite since he has consistently said that he thinks gay people are a danger to children. Uh, news flash: Josh is the one who’s actually a danger.

We don’t even know the full extent of these crimes and how far Josh actually went with these girls. Details are still unfolding about what actually happened and until we have a clear picture of what went down, defending Josh should be the last thing on everyone’s mind.