Jane Fonda is offering some advice, and we really think Lindsay Lohan should take her up on it. Find out what the veteran actress says Lohan needs to experience.

Jane Fonda, still gorgeous at 77 years old, was born into an acting family that quickly grew into a Hollywood dynasty. Her father, Henry Fonda, was known for such famous movies as The Grapes of Wrath and Once Upon a Time in the West. Her brother Peter Fonda continues to appear in film and TV, and her niece Bridget Fonda is best known for the film Single White Female. Given that Fonda has success in her blood, we think it’s great that she’s offering advice to the often-wayward starlet Lindsay Lohan.

While promoting her new Netflix series Grace and Frankie, also starring Lily Tomlin, Jane Fonda told Bravo’s Watch What Happens Live that she would like for Lindsay Lohan to spend a lot of time with her.

“Come live with me for awhile and get a sense of what normal is supposed to be like,” said Fonda.

Host Andy Cohen playfully asked if life at Jane’s house was “normal.” Her answer surprised us. 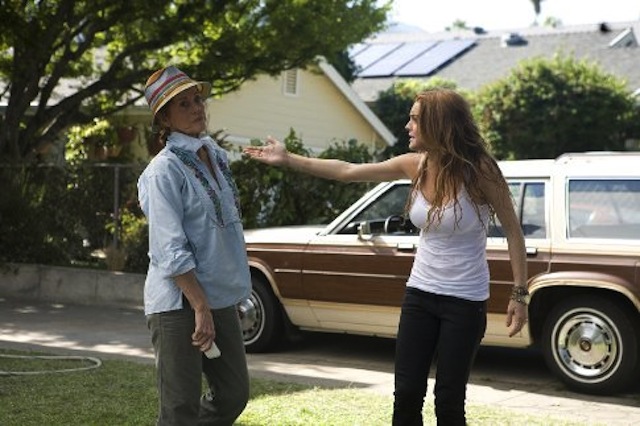 The two actresses worked together on the film Georgia Rule back in 2007. Lohan was notoriously late to set, prompting the production company to call her “unprofessional.”

Jane Fonda doesn’t seem to harbor any ill will toward Lohan, however. In fact, she seems to really appreciate her talent. She told Entertainment Tonight, “With all the furor about her behavior and all that kind of thing, the fact is, this is a really talented girl. But she also touches me, just on a human level, aside from the talented actress. There’s so much pressure on her.”

Season 1 of Grace and Frankie is currently streaming on Netflix. Lindsay Lohan was last seen on CBS’s Two Broke Girls.

Do you think Jane Fonda would really let LiLo live with her? Weigh in below in the comments section.