Welcome back to Litchfield, Orange Is the New Black fans. Netflix released a new trailer designed to lure in new viewers (are there really people out there who aren’t watching?) while also dropping a few sneak peeks of Season 3 in for good measure. It is those glimpses ahead that are the most enticing. Among the highlights: Suzanne is much happier with Vee gone, Black Cindy finds a creative use for disinfectant and the kitchen drama looks poised to continue.

More: How Each Orange Is the New Black character ended Season 2

“People think all we do is have lesbian sex and strip searches and have naked catfights in the shower… we also do other things,” Piper says at the end of the trailer. She’s right, too; there is definitely more to the series than just prison shenanigans. One of the things OITNB does best is relationships — romantic, familial and platonic. Throughout the trailer, we get glimpses of our favorite duos, including the newly reunited Piper and Alex and best friends Taystee and Poussey. Let’s break down the new scenes and see what they tell us about the stories ahead. OITNB Season 3 premieres June 12.

Alex is back in prison this season after Piper turned her in for violating parole. Not the most promising new beginning for this wonderfully complicated couple, but nothing has ever been easy between them. The new scenes reveal a role reversal is happening. Alex, who was once so comfortable at Litchfield, appears to be adjusting poorly to her return. She is even visibly distraught as she cries in the bathroom.

Piper has stepped into the Alex role. Not only is she comfortable in her surroundings, she is the one who is responsible for putting Alex back behind bars (just like Alex was responsible for putting Piper in prison in the first place). If Piper is interested in rekindling her romantic relationship with Alex, she has a long way to go. The characters are physically separated by a wall in the trailer, and even though there are clearly still feelings between them, Alex and Piper will not be picking up where they left off.

More: The real Alex Vause reveals what Orange Is the New Black got wrong

Taystee and Poussey continue to be OITNB‘s best duo as Taystee steps up to take care of her best friend Poussey. There are lots of hugs between the ladies, and even though some of the footage is from past seasons, it certainly hints these two will be a big focus in Season 3. The real question is will they go from friends to lovers? Poussey is harboring serious unrequited romantic feelings for Taystee, but Taystee has insisted in the past that she only loves Poussey as a friend.

With Vee gone, Taystee and Poussey can go back to being each other’s central support system. That does not mean everything will revert back to the way it was before Vee showed up, though. Their relationship faced a serious roadblock in Season 2 and they came out of it stronger than ever. Taystee chose Poussey once — maybe this year she will choose her again as something more than a friend.

The biggest surprise from the trailer is the continued friendship between Pennsatucky and Big Boo. They both became ostracized from their groups last season, and they have formed what looks like a solid friendship. How long can these two possibly stay friends, though? Given their big personalities, it seems odd they can coexist so peacefully, but they have both spent a lot of time dealing with people not taking them seriously.

Together they could be a force to be reckoned with. If the pile of snack food around them is any suggestion of how they are using their combined power, then the rest of the inmates had better watch their backs.

The trailer is sadly lacking in Bennett, but Gloria and Daya share a sweet scene together. Daya may need more female support as her pregnancy continues. Bennett’s last-minute confession that he is the father of Daya’s baby may have been too little, too late. Gloria has always been a mother figure to Daya, and watching those two continue to bond will surely be a highlight of Season 3.

Norma hardly ever speaks and Soso cannot shut up. OITNB should have thought of this pairing before. Neither character’s background has been explored yet, so they are both due for flashbacks in Season 3. Hopefully, the warm hug they share is hinting they will get more screen time and Soso will finally find a place to belong among the inmates.

More: 9 Things the new OITNB trailer tells us about Season 3 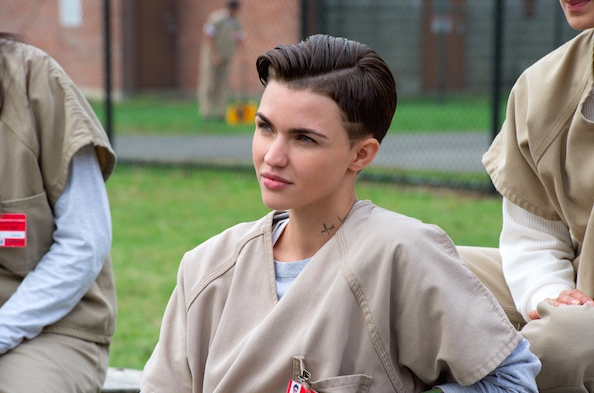 New character Stella (Ruby Rose) gives someone a teasing wink in the trailer — but who? Entertainment Weekly noted Stella will be lusted after by both Piper and Alex. It is possible their mutual attraction for Stella will bring out their competitive sides… or Stella could be the catalyst they need to get back together.