We’d be surprised if you haven’t heard of the viral sensation, Walk Off The Earth. With 1.8 million Facebook followers and more than 2 million YouTube subscribers, the rock band is taking over the internet, one brilliant cover at a time. We had the chance to interview two members from the band, Sarah Blackwood and Gianni Luminati, and they dished on everything from philanthropic causes close to their hearts to pre-show rituals.

SheKnows: What’s been the most trying time or difficult obstacle in your music career, as a band, so far? 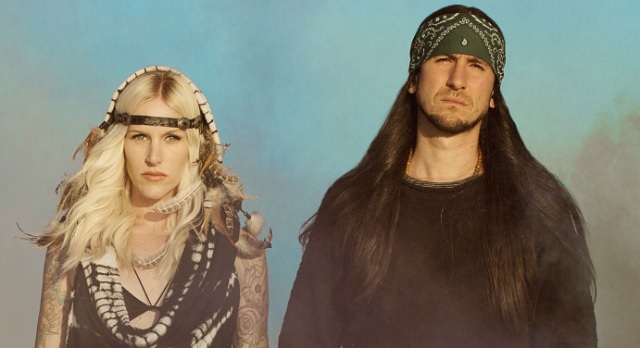 Sarah Blackwood: The biggest challenge for me has been learning to continue to work as a full-time musician and mom. Having children has changed my life in so many ways and the biggest is it has opened my eyes to what I am actually capable of. It’s pretty incredible.

SK: Name a couple performers or bands in the industry you admire and explain why.

SB: There are many people I admire in the music industry. It ranges from Bob Dylan to Taylor Swift. There are so many talented people out there that know how to work it from so many different angles. I think the most beneficial thing you can do as a musician or artist is keep an open mind and learn about all the people around you that are finding success in the goals that are similar to your own. See the entire picture from different aspects and become knowledgable of how you can utilize your idols and their paths.

GL: Hippie answer in three, two, one… we like to think of it as a state of mind. For me, the name represents the effects of music on a person. When you’re listening to music in your car or wearing headphones and lying on your couch, you can reach a state of meditation that can not only make you forget your problems of the day, but it can actually help in healing those problems. We want to make music that can guide people to reach this and help them Walk Off The Earth!

SK: What philanthropic or important causes are you most passionate about?

GL: SickKids hospital is something we’d like to get involved with in the near future. It’s something I like to donate to for obvious reasons. We’d like to visit some kids and play them some music in the near future. Sarah and I are also passionate about animals and the lack of respect some humans have shown them. Animals are so important and awesome. World Animal Protection Canada is a charity I’ve donated to.

SB: Absolutely. Music is real. It is the one thing on this planet that connects all people. No matter who you are or where you go, there is music that is bringing people emotion. We tell stories through our songs and that helps people relate to each other. It’s the highest purpose. It’s a global relationship.

SK: Do you have any traditions or rituals as a band, whether it’s before you perform, when you’re in the studio or just hanging out?

SB: Right before we go on stage we do a “circle of power”-type thing and one chosen person will have to say “the word” (it’s a word of their choice) and we all count in and yell that word as loud as we can. It helps get us hyped for the show. Other than that, we don’t really have anything ritual-based.

SK: What message do you want to communicate through your original music on your sophomore album?

SB: We want to continue to inspire people to keep their minds open. To grow and feel motivated to follow their own goals in life. We have kind of a motto where we encourage positive energy and forward thinking. We just want to keep doing that. Showing people that anything is possible as long as you have the right direction and spirit.

SK: What’s the best advice you’ve ever received from another performer/band?

SB: Bring your own pillow on tour. Because it is the only way you will feel closer to home.

SK: Tell us one thing fans don’t know about each person in the group.

SB: When I go through a drive-through, I have to have all of my coin change facing tails up and stacked in a tower from biggest coin to smallest.

Now listen to Walk Off The Earth’s super-catchy single, “Rule the World”:

But that’s not it, you should definitely listen to their “Shake It Off” cover.

Reba McEntire opens up about being Kelly Clarkson’s mother-in-law
Dan + Shay on how Miranda Lambert’s an amazing role model for women
NKOTB or New Edition? Debbie Gibson talks all about the ’80s (VIDEO)