Demi Lovato has been open about her recovery from addiction.

And because she has been open about her struggles, she has become quite an inspiration to many fans and people either dealing with or having gone through difficult times themselves.

So, when tattoo artist Ashley McMullen lashed out at the singer, her response was not only spot-on but truthful, honest and contained just the right amount of snark to get her point across.

McMullen posted on her (private) Instagram page, “Cool post @ddlovato, thanks for getting the tattoo covered up I did for free that you specifically asked for. Not to mention you didn’t even have the courtesy to offer me any money in the first place.”

She was just getting started. She continued, “You pissed all over our toilet seat and you made a fool out of yourself. What a shame that people look up to you. The tattoo you covered it with kinda sucks too. Looks like you might forever be a goon. #demilovato #scumbag #turd #claimstobesober #drankallthebeer #peepeetoiletseat #yousuck.”

But wait, she didn’t stop there. “It’s a really nice example to people your [sic] setting saying to not to drugs, but honestly you were acting like a full time [sic] slob… You never even gave me a shout out when I dealt with your drunk ass.”

So many things wrapped up in just a few short posts. Aside for the obvious grammatical errors, it’s totally classy to not only trash Lovato, but then take digs at another tattoo artist who has nothing to do with the beef between these two.

But let’s just leave it up to the very levelheaded and well-spoken Lovato to point out the truck-size holes in McMullen’s rant.

The singer posted this response on twitlonger: “I wasn’t going to acknowledge your bitter Instagram comments but since your side of the story has picked up some headlines, I would like to share my thoughts and send you a proper apology. First, I would like to say I’m really sorry I don’t remember you or getting tattooed by you, but as you know I was f***ed up and sometimes people act like ‘#turds’ when they’re loaded.”

More: Demi Lovato after rehab: “I still have bad moments”

She apologized for peeing on the toilet seat and then continued “Lastly, I apologize for making fun of your work… But… if I were you, I wouldn’t claim that one because it looked more like an open vagina… I also wouldn’t be admitting to the fact that you tattooed a very intoxicated 18 year old [sic] on a tour bus without proper judgement [sic]… I can’t blame you for getting the tattoo, I take full responsibility for that but it the issue here is you wanting credit, maybe next time you should wait for the person to get your tattoo sober so they would actually remember getting the tattoo in the first place.”

The best part about the whole apology is this part, “… or perhaps you could’ve thought about all of this as a blessing that I forgot everything about you — that was until you outted [sic] yourself for the now internationally infamous ‘vagina tattoo.'” 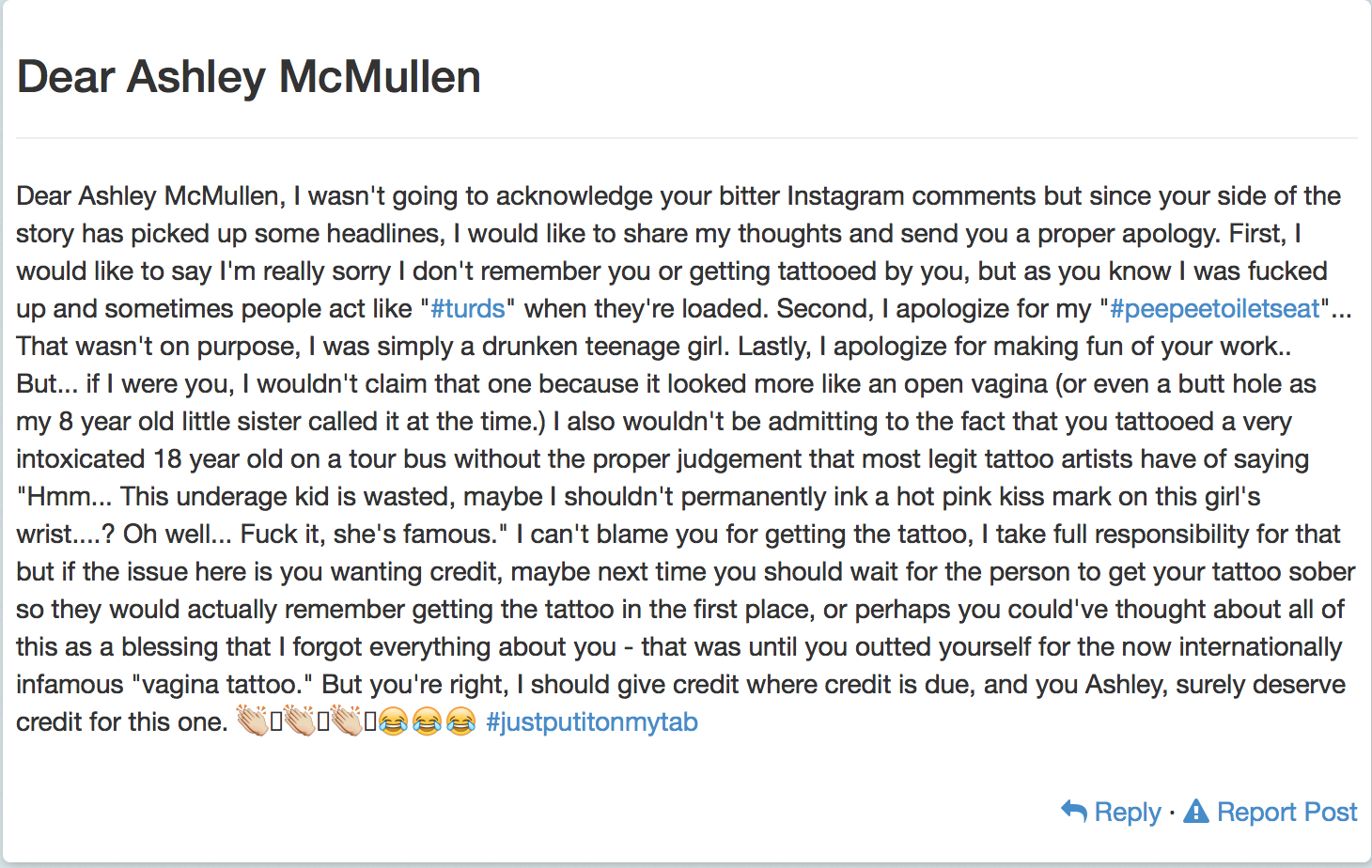 She closed it with the most appropriate emojis ever: the crying-laughing face.