Between Mattie finding out she had a ragin’ gum infection to Tiffany rushing off to be with her dad in the hospital, last week wasn’t exactly the best for our Party Down South-ers. Fortunately, things started to perk up quickly for our vodka-infused friends.

The night after Tiff leaves, the gang decides to try to shake their funk with a trip to Nate’s.

When friends with benefits get… friendlier

Despite another night spent in Hott Dogg’s arms, Daddy is adamant that he is only interested in being friends with benefits. As such, he makes a big deal about going to the bar. “If there’s any marlins here in Biloxi, then by God they’re going to be at Nate’s… Daddy is always marlin fishing, always.”

To break the tension, Walt asks Hott Dogg to dance so he can give her some swing dance pointers. This does not sit well with Daddy, who is clearly only interested in being friends with Hott Dogg. He grabs some chick and spins her around haphazardly while staring at Hott Dogg the entire time.

If possible, it’s even more awkward than it sounds. But apparently, it could be a winning tactic for Daddy — Hott Dogg is totally turned on by his high school-like jealousy level.

And, uh, things got… steamy after that.

Explains SallyAnn Salsano, 495 Productions president and founder and creator/executive producer of Party Down South, “At Nate’s Bar, Daddy and Hott Dogg were grinding so hard on the bar that they almost got kicked out.” Well, meooow.

After also nearly doing it in the back of the cab, they manage to bridle their hormones long enough to crawl in the bed opposite Mattie — she gives them seven minutes to get their business straight, which I think is pretty generous given Daddy’s past.

The next morning, Daddy has a bit of banger’s remorse and swears, “This is just a friends with benefits situation… there ain’t no way I’m gettin’ hitched anytime soon.”

On the other hand, Hott Dogg feels pretty confident they are headed towards a relationship since they had slow sex. Da-da-duuuuuuuuum!

Mattie thinks this sounds like a pretty good sign, too, chiming in, “If they get married, I want to be the best woman and instead of throwing flowers, I want to throw a funnel.” That’s one wedding I’ve got to nab an invite to.

Their dreams of nuptial redneckedness are cut short and, before you know it, Tiff is pulling up. Yay for more Tiff! She wasn’t even gone a whole episode and I missed her. Is that weird? (Just say no.)

Time for some fun in the moon

They head to the beach, where they generally have to do things like put out beach chairs and rake sand. Mattie is adorably excited about going on the Jet Ski or, as she calls it, a “four-wheeler on water.”

Walt laments that it’s hard to get a tan when it is so overcast. Apparently, though, there’s nothing for him to stress over. “That’s when you get the best tan,” says Tiff. “The sun’s working the hardest.” She then proceeds to tell Walt and Mattie they are actually looking at the moon, not the sun. Mmm-kay.

Of course, no conversation would be complete without the housemates referencing Daddy and Hott Dogg’s romantic status. Walt asks Hott Dogg how she feels and, when she kinda admits she likes Daddy, Tiff tells her Daddy is not looking for a relationship.

In the car on the ride home, the fellas fill Daddy in on Hott Dogg’s feelings — so he vows not to hook up with her anymore.

About, oh, five minutes later, they are back at Nate’s and Daddy is having a hard time keeping his distance. Either there is a marlin shortage out there or Daddy is hooked on Hott Dogg.

“I think it’s honestly a combination of the two things. There were girls out that were cute, but I think in Daddy’s eyes none of them were near as delicious as Hott Dogg. He couldn’t take his eyes away from those fiblets,” says Salsano.

Still, he does a pretty swell job of sobering up when Hott Dogg starts talking feelings. He tries to put her in the friend zone, telling her, “We’re going to be good buddies” and “I’m not a dude you want to date.” Yeesh, that’s enough to kill any girl’s lady boner. 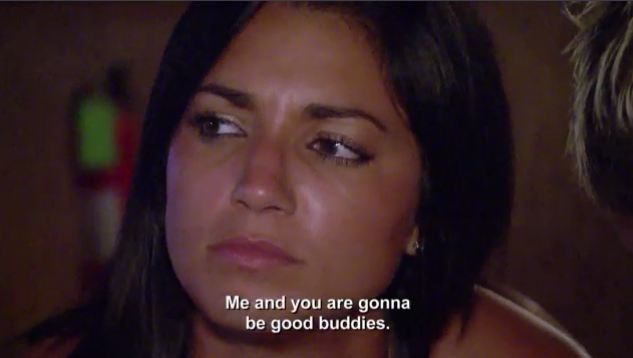 Lyle and Murray seemed to be faring pretty good at the bar, though, according to Salsano. It didn’t make the final cut, but both fellas hit it off with some cougars at the club.

“But Lyle’s cougar had work in the morning and Murray found out in the taxi that his ‘girl’ actually had a husband — and got car sick in the cab. So he sent her home!” Salsano reveals, laughing.

Exactly how many people are in this relationship?

Despite Lyle letting out a huge fart, Daddy and Hott Dogg continue their intense discussions in the cab on the way home. Obviously, Lyle gained some clarity with the passing of his gas, as he realizes Daddy is feeding Hott Dogg a whole different story than the one he did the guys earlier that day.

When he recounts the convo to Mattie and Walt, Mattie gets totally fired up. “Not on my watch!” she yells, storming downstairs to have a powwow with the faux couple.

She calls Daddy out for playing Hott Dogg for a fool and Daddy loses his temper. This causes Tiff to lose her temper, and then all hell breaks loose. Before you know it, Tiff is hollering at Hott Dogg, “Don’t f***ing yell at me in my face!”

You know, while she is, er, f***ing yelling in Hott Dogg’s face.

At that point, Hott Dogg has had more than she can handle and breaks down crying in Mattie’s arms. It’s sad, y’all, for reals. But was Daddy really feeding Hott Dogg lines or had things just spiraled?

“Anytime eight people live in such close quarters, they’re bound to be super involved in each other’s business,” considers Salsano. “That said, I think Daddy was just figuring everything out himself and was gun-shy from his previous house hookup. So things got pretty confusing between them, especially with the other roommates weighing in on the whole thing.” 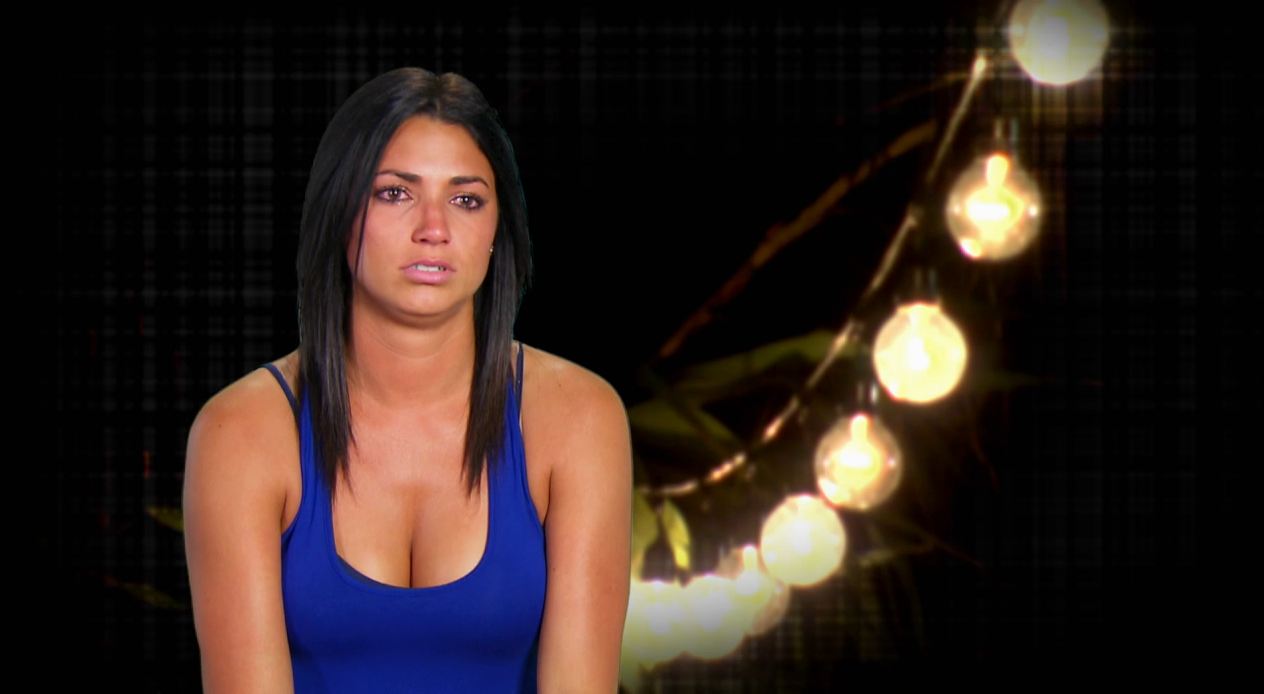 Thankfully, Mattie pulls an Oprah and gives her pal one hell of a pep talk.

“Hott Dogg’s gotta find Hott Dogg and be happy with who she is before she can make any man happy. You gotta believe in yourself, because nobody’s gonna believe in you if you don’t believe in yourself. You can do this, girl, and then you ain’t gonna need a man, you’re gonna want a man — and there’s a difference.”

Whaaa? Where in the hell did that come from? Mattie, can we be besties, too, girl?

The next day, the housemates figure that heading out to Mud Fest one final time might be just what they need to clear the air.

At first glance, everyone is having a blast. There are people shotgunning beers, mud wrestling, rolling around in pontoon trucks… it’s redneck euphoria. 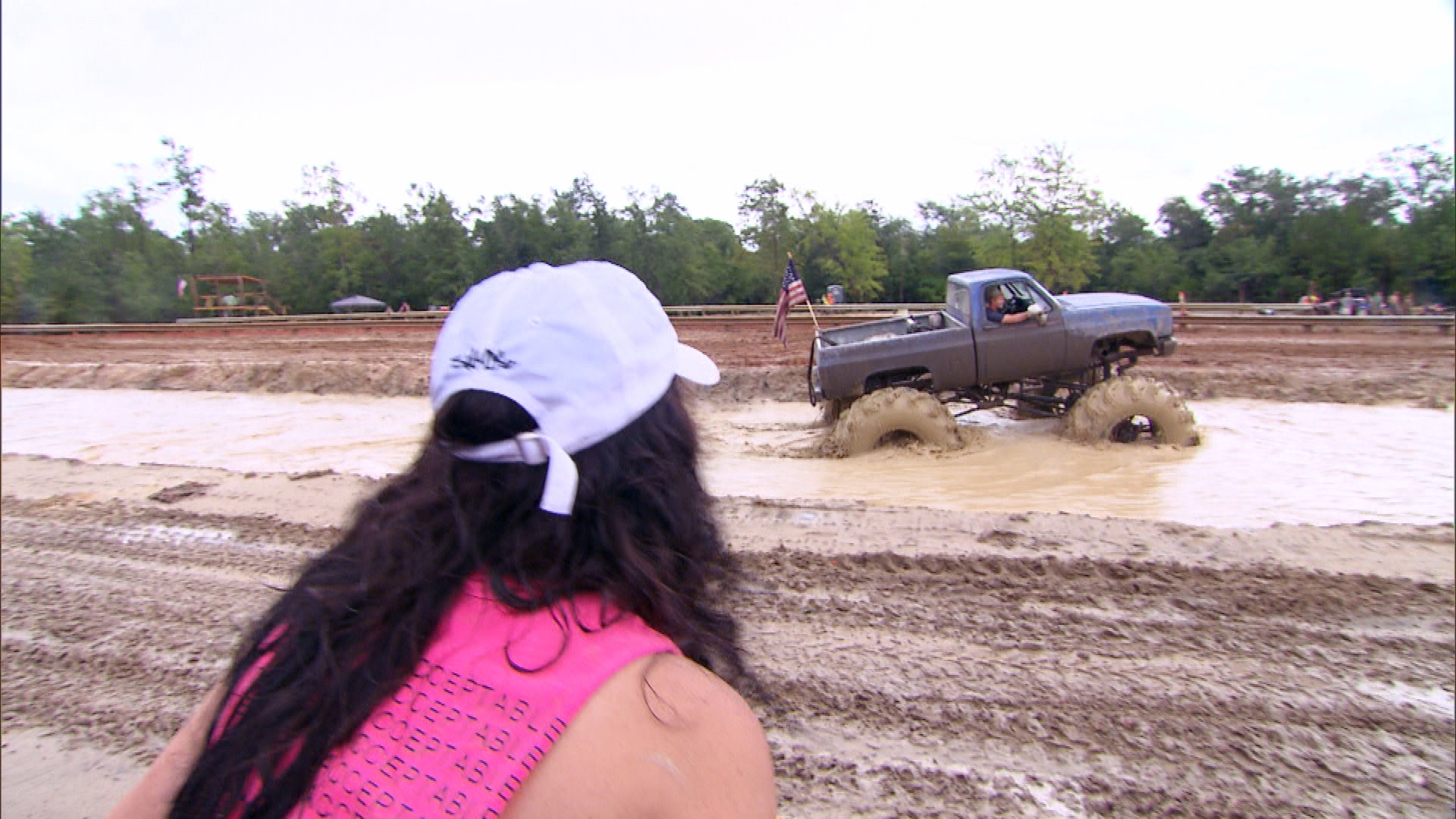 Then Daddy starts flirting with a bunch of “snappers” and makes Hott Dogg jealous, so she does the only logical thing — she jumps on the back of the truck and starts twerking.

And, whattya know, it gets the job done. Daddy is quickly “tractor beamed into the mothership.” It didn’t take long, either.

Explains Salsano, “Those tractor beams went into effect pretty quickly once they got to the mud pit. Hott Dogg started shaking her fiblets in the back of the truck and Daddy barely saw anything else!”

“It was pretty hot and heavy in the bed of that truck,” says Salsano. “Let’s just say that there were definitely things we couldn’t air on TV… thankfully, no clothes came off or they would have been making babies.”

As far as we know, though, no babies were made during the filming of this episode. Still, there’s always next week!

Insider reveals Walt’s embarrassing problem
Why 160 hotdogs were harmed during the filming of this episode
Wait, did that chick seriously just punch Tiffany?