By now, anyone who spends any time on the internet knows that Patrick Dempsey’s character, Dr. Derek Shepherd (better known as McDreamy), was killed off the show on the most recent episode of Grey’s Anatomy.

And anyone who spends any time on the internet also knows that fans are not happy about it.

The emotional reactions range from anger to sadness and everything in between, but no fans are more hysterical than the ones posting and commenting on a petition posted to Change.org demanding that the show’s creator, Shonda Rhimes, bring back McDreamy.

Here are nine of the most hilarious claims made by fans who say McDreamy better rise from the dead or else.

“You’ve destroyed us. COMPLETELY!” Williams wrote on her petition, which has now been signed by more than 50,000 fans. “Then because of the negligent hospital he cant even donate his organs and live on in other characters!! SERIOUSLY?!?!?! I can’t even continue watching the show knowing that McDreamy’s eyes, heart, lungs, kidneys, or liver is still living amongst other fictional characters (sic)?!?!!??!!?!?!?!”

She continues, “It’s like you’ve killed the President of Grey’s Anatomy! The Fans are ready to serve you papers and charge you with the Patriot Act! You HAVE TO BRING DEREK BACK! NOW! IMMEDIATELY! What is Meredith going to do?! What is Zola and baby Bailey going to do!?!?!?!?!?!!?!? Did you NOT think about the kids?! People are not sleeping nor eating because of this tragic turn of events and you are not there to help them in any way shape or form (sic)!”

Other gems: Williams demands that the hospital that killed Shepherd be shut down (I’m sorry, but does she think this happened in real life?) and rallies other hysterical Grey’s fans to sue Shonda Rhimes. You do you, girl. You do you.

“I’ve been watching this show for almost my entire childhood (since I was 11 to be exact) and now pull this bullshit. That is f***ing unacceptable. You don’t get to play with our us and our feeling as if we were your unimportant dolls that you can you mess with whenever you feel like it.If you wanted to take Derek away, then you should have ended the show because he is as important as Meredith. And if you wanted him dead then you should’ve found a better way then him being at the mercy of stupid doctors who didn’t know what they were doing (sic).” 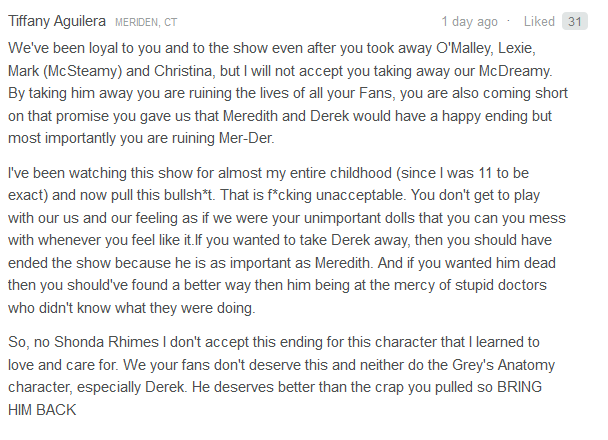 “I think shonda rimes has treated her loyal greys fans wrong. We are invested in this show after years of watching. I will no longer watch greys or scandal. If she whacks long term characters for no reason on one show she will do the same on another (sic).”

“I will never get over this and I hope you realize the gravity of what you have done to devoted Grey’s lovers all around the world. We will never forgive you.”

“I feel like I have lost a best friend because of this! I can’t even fathom watching this weeks (sic) episode of his funeral. It truly is cruel and unfair to the audience.”

“If you don’t bring Derrick back I will never watch a shondra rimes show again (sic).”

“I’m signing because there’s no logical reason for Shonda’s decision. WHY. That’s all I’ve been asking myself and everyone else in tears. This is cruel and unfair. How can you kill McDreamy off a show so sudden and in such a cruel messed up way? Do you even have feelings (sic)?”

“BECAUSE I FEEL PERSONALLY VICTIMIZED BY SHONDA RHIMES.”

More: Patrick Dempsey tries to convince everyone there was no feud on Grey’s Anatomy