The family’s matriarch, Mama June, took her eldest daughter, Anna Shannon Cardwell, to task on Instagram after finding out she’s pregnant with her second child.

“Well guess who will b a gigi and aunts again in December we will,” Mama June captioned a photo of herself and her girls on the social networking site. “@annamarie35 texted me late last night and told me she was 6 wks as of thursday.”

But even though Mama June, whose real name is June Shannon, said she’s excited to be a grandma to another baby, she was concerned that 20-year-old Anna is too young to be pregnant again.

“They r too young to have another one i will support her and Michael but katilyn will always b gigis first baby,” June wrote. “im not going to sugar coat its im nervous for them as i know they r struggling with just them and katilyn right now and adding another one is going b hard. And they r in different state for me to help her out like i was able to help alot with katilyn but going to try to b supportive as possible ….congrats @annamarie35 @cardwellmichael #gigisbaby#2.” 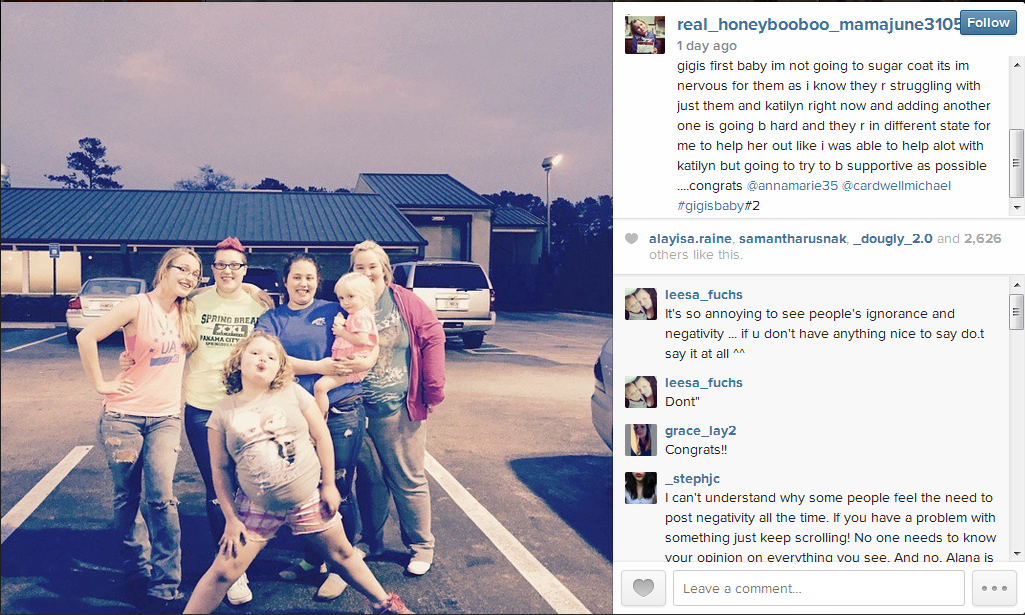 This isn’t the first time June and Anna have aired a public disagreement about something. Anna, who was known as Chickadee on the family’s TLC show Here Comes Honey Boo Boo, told Dr. Phil in December that she and her mother had a falling out over June’s boyfriend, Mark McDaniel, who Anna claims molested her as a child.

“It’s Mama’s fault. She has to live with it,” Anna said about her mother’s relationship with McDaniel, a convicted sex offender. “She has brung the past back and now she can’t get it away. I’m mad. I’m upset. I feel betrayed. I feel very hurt. That’s the main thing that I am — I feel very hurt that Mama let him come around.”

Anna also said June has withheld her trust fund since their falling-out.

Do you agree with Mama June that Anna is too young to have another baby? Or are you on Anna’s side? Head down to the comments and let us know what you think.