I had a strange thought while watching the Bruce Jenner interview tonight: Who are these people and what have they done with the gossipy, materialistic reality stars I thought I knew?

In all honesty, I’ve never watched Keeping Up with the Kardashians. It’s just not my cup of tea. But in the world of entertainment journalism, details about the Kardashian clan’s life cannot be avoided. And, yes, the judgement was definitely there.

While tonight served, most importantly, as a triumph for the LGBT community, it also did a lot to humanize the Kardashian/Jenner clan. I suddenly found myself sympathizing and supporting them in a way I never thought I would.

And, yes, I’ll admit it: respecting them.

Because the way they are speaking out on behalf of Bruce Jenner can’t be described as anything less than beautiful.

Brody Jenner told Diane Sawyer that when he found out, it was a big realization that made so much sense.

Of course, it hasn’t been an easy road for the family. Kylie spoke candidly about it on Twitter.

Oldest son Burt Jenner described an experience when he was in middle school and had to run from the room because he suddenly had the feeling his dad was going to become a woman and leave.

But the kids all agreed that when Bruce did tell them about his transition, he was sure to say that he would “always be their dad.”

But Bruce’s mother’s reaction was probably the best of the evening. “I want you to be happy, and I love you,” said nearly 89-year-old Esther Jenner in a video message to her son. “I was very proud of you when you stood on that podium, and I never thought I could be more proud of you. But I’m learning I can be.”

Sawyer put it best: “In a world in which so many families reject a transgender parent or child, this family wants you to know there is another way.”

And instead of shying away from the spotlight — which the Kardashian/Jenner family has never done — they are showing us front and center how it’s done.

It’s important to note: Jenner said that he would like to continue to be referred to as “Bruce” for the time being. He would also like to be referred to by the masculine pronouns “he/him,” so we have respected his wishes as we wrote this article. 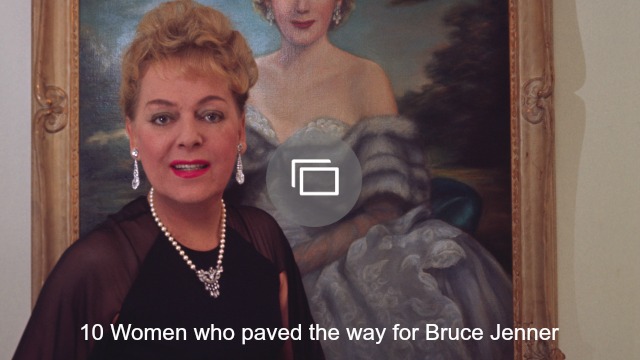