Hurricane Martha was barreling towards the housemates when we left off last week, thanks to a road trip and BBQ at Tiffany’s house, which Mattie’s mom and sis had yet to show up for.

Tiffany — aka the Martha whisperer — was able to calm the savage beast — fueled by copious amounts of tequila — welling up in Mattie’s soul.

Of course, the precise moment Tiff tucked Mattie into bed and calmed her down was the moment Mattie’s prodigal mom and sister chose to actually make their debut. “Honestly, when they showed up, I wanted to tell them to get in the car and go home,” says Mattie, and who could blame her?

You can find me in the club… with my mom

The entire gang, moms and all, then heads out to the local bar in Eunice to get their drank on… and it gets wild faster than you could slap a tick, y’all.

Lauren’s mom backs it up on her, causing Lauren to freak out. Mattie is on a mission — drinking, taking shots and dancing all over everyone and their daddy. Uh, literally.

Naturally, trouble ensues when they try to tell hard-partying Mattie it is time to leave. She fights the good fight — taking off her boots and throwing them, peeing in the parking lot, etc. — but ultimately loads up in the cab relatively quietly.

She wasn’t the only housemate to cause a bit of a ruckus, though. In a moment that gave me serious secondhand embarrassment, Wild Lyle tried to pull his wiener out and show it to strangers… only to be shut down by his mom.

I think Daddy said it best: “It is all fun and games until your mom stops you from pulling your dick out at a party.”

Walt puts the “p” in party

“Walt is used to peeing his own bed, but I can honestly say that he was embarrassed more so about peeing on Tiff’s couch. He was also very afraid of Tiffany that morning,” explains Salsano.

To make amends, he cooks seven pounds of bacon. ‘Cause, obviously, nothing says I’m sorry like a whole lotta pork on a plate. 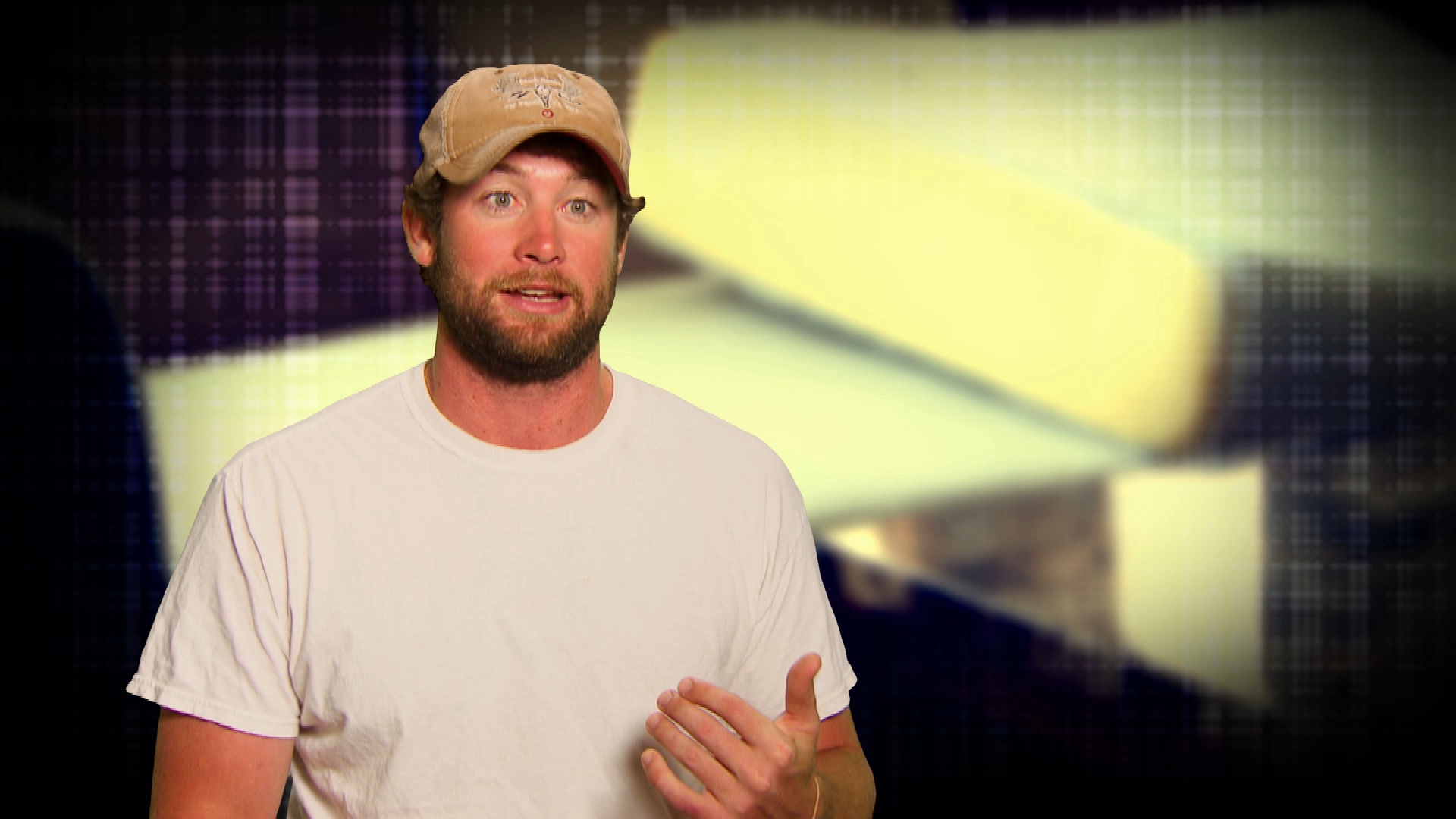 What happens in New Orleans…

That night, the housemates head to New Orleans — Hott Dogg and Mattie’s neck of the woods. Lyle proposes an impressively rhymed toast before they go partying, proving he’s basically the poet laureate of Party Down South. 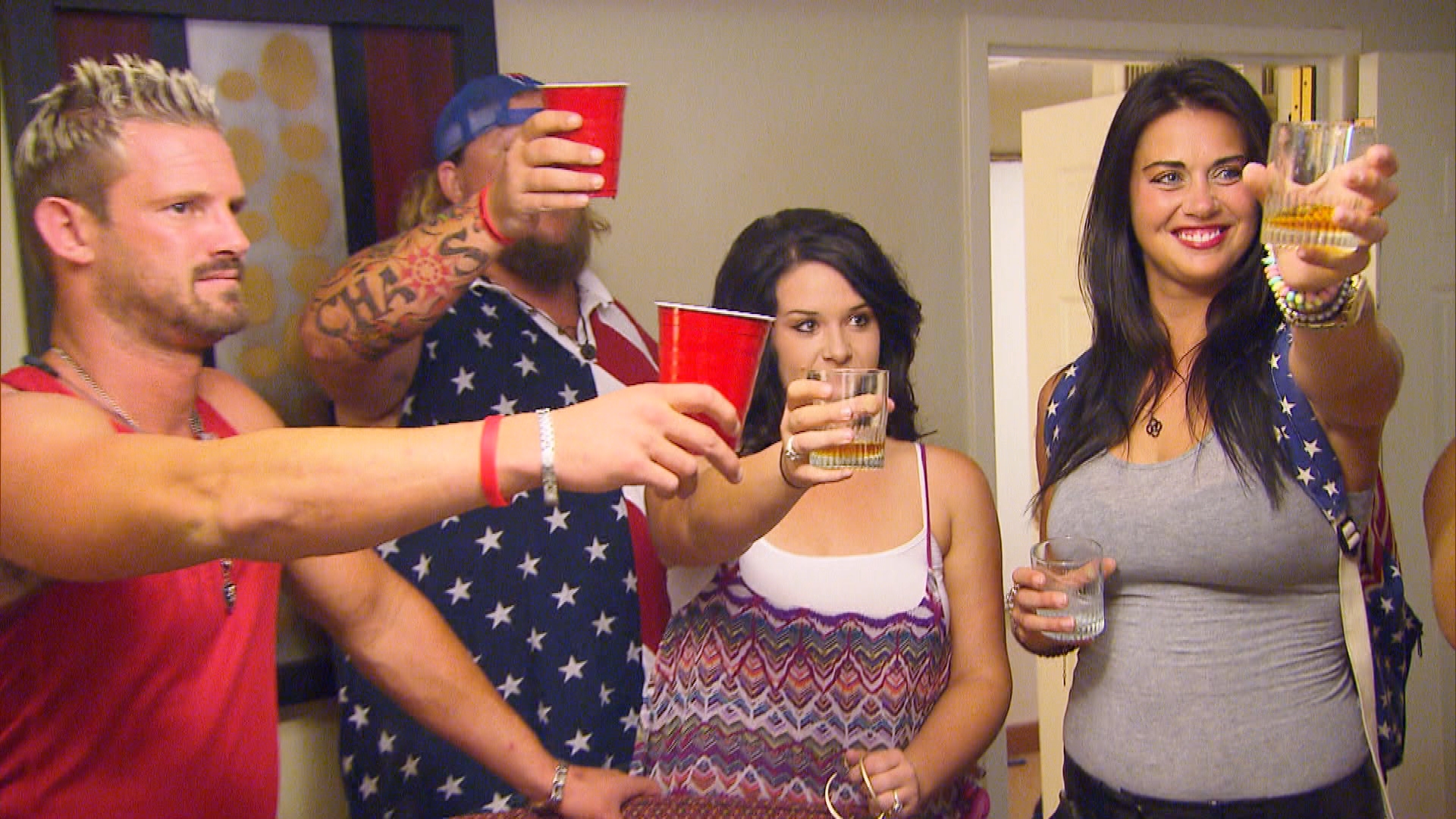 Out at the club, the sexual tension between Hott Dogg and Daddy just gets awkward. He is baby-girling every chick who crosses his path, which makes Hott Dogg jealous. So she does the only rational thing left to do: shake her ass five inches from his face all night long and flirt with random dudes.

After striking out with pretty much every girl he was grinding on, Daddy decides he will perhaps take Hott Dogg home. “All he does is send me mixed signals, and I know that he knows he’s f**king with my head,” she realizes.

Meanwhile, Murray and Lyle are outside trying desperately to unload the $250 worth of beads they bought in exchange for, well, you know. Unfortunately, it appears they caught a case of too many beads and not enough boobies. 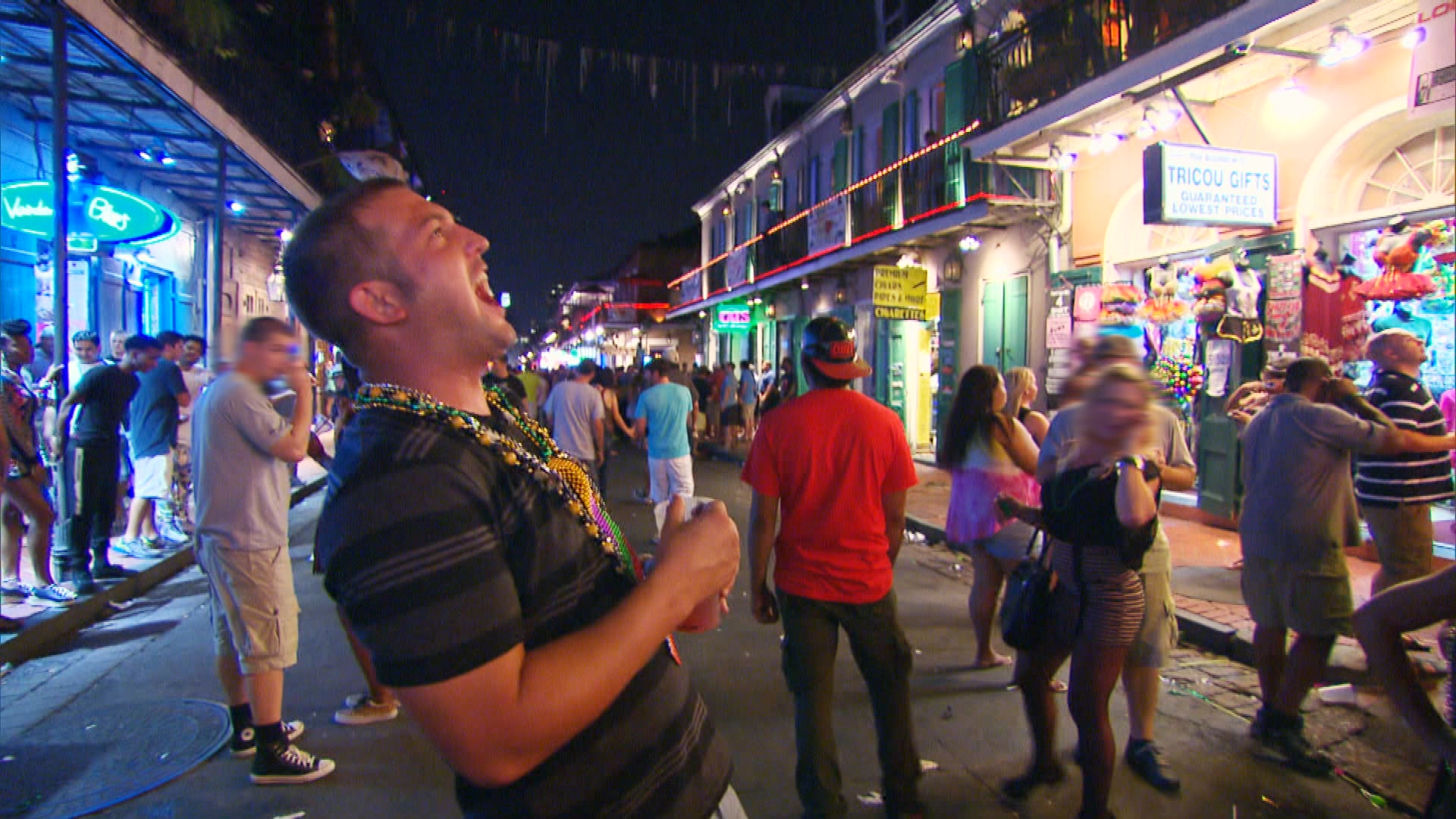 “Sometimes what happens in New Orleans just needs to stay in New Orleans,” says SallyAnn Salsano, 495 Productions president and founder and creator/executive producer of Party Down South. “But let’s just say that the guys sure made it home with a whole lot of beads.” 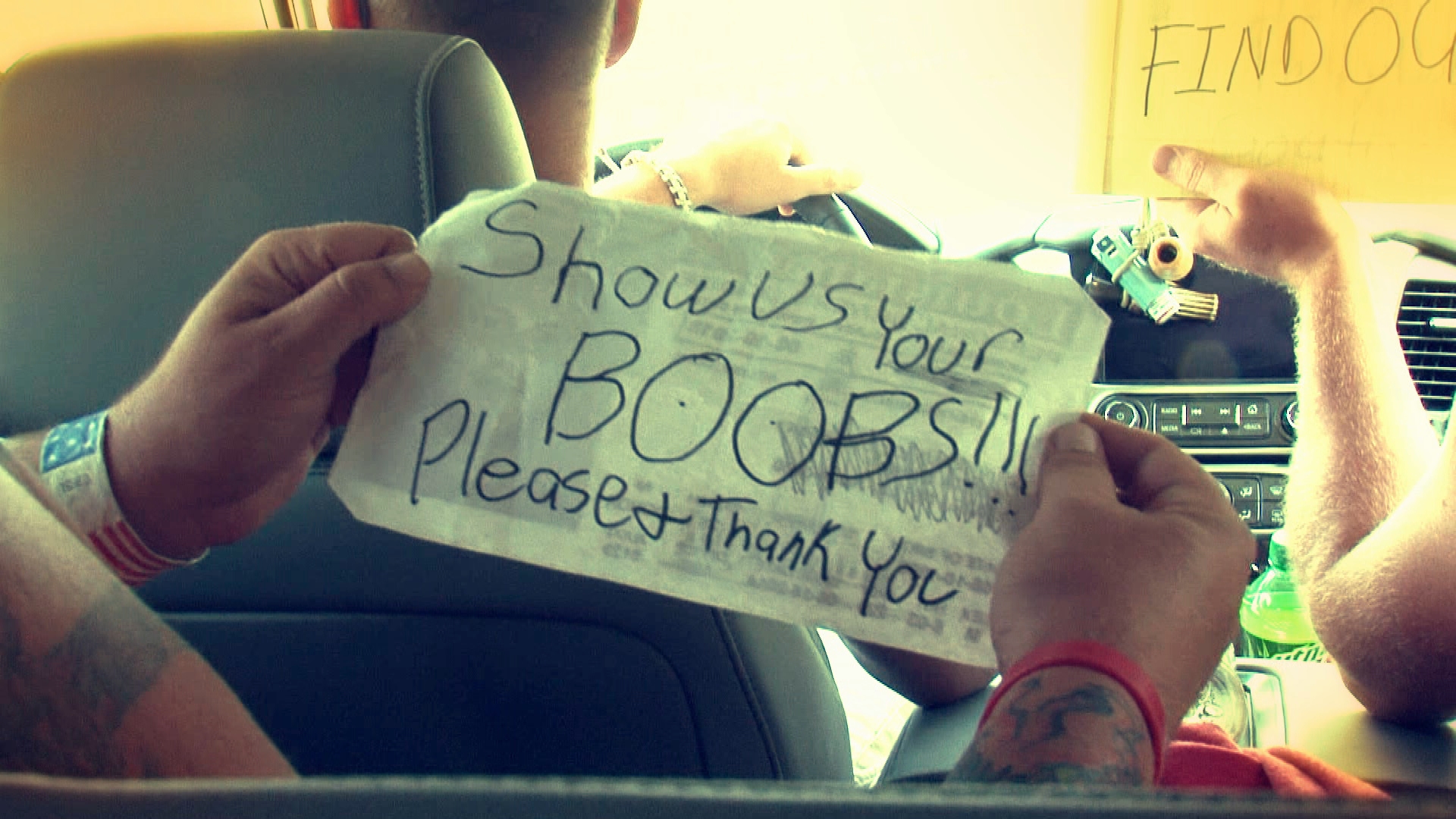 While outside, Lyle runs into his old friend, Jace, and — c’mon, now — that kid is cute, cute, cute.

Lauren and Tiff ended up on the couch together, where (for the umpteenth time this season) Tiff had to fight off Lauren’s sexual advances. 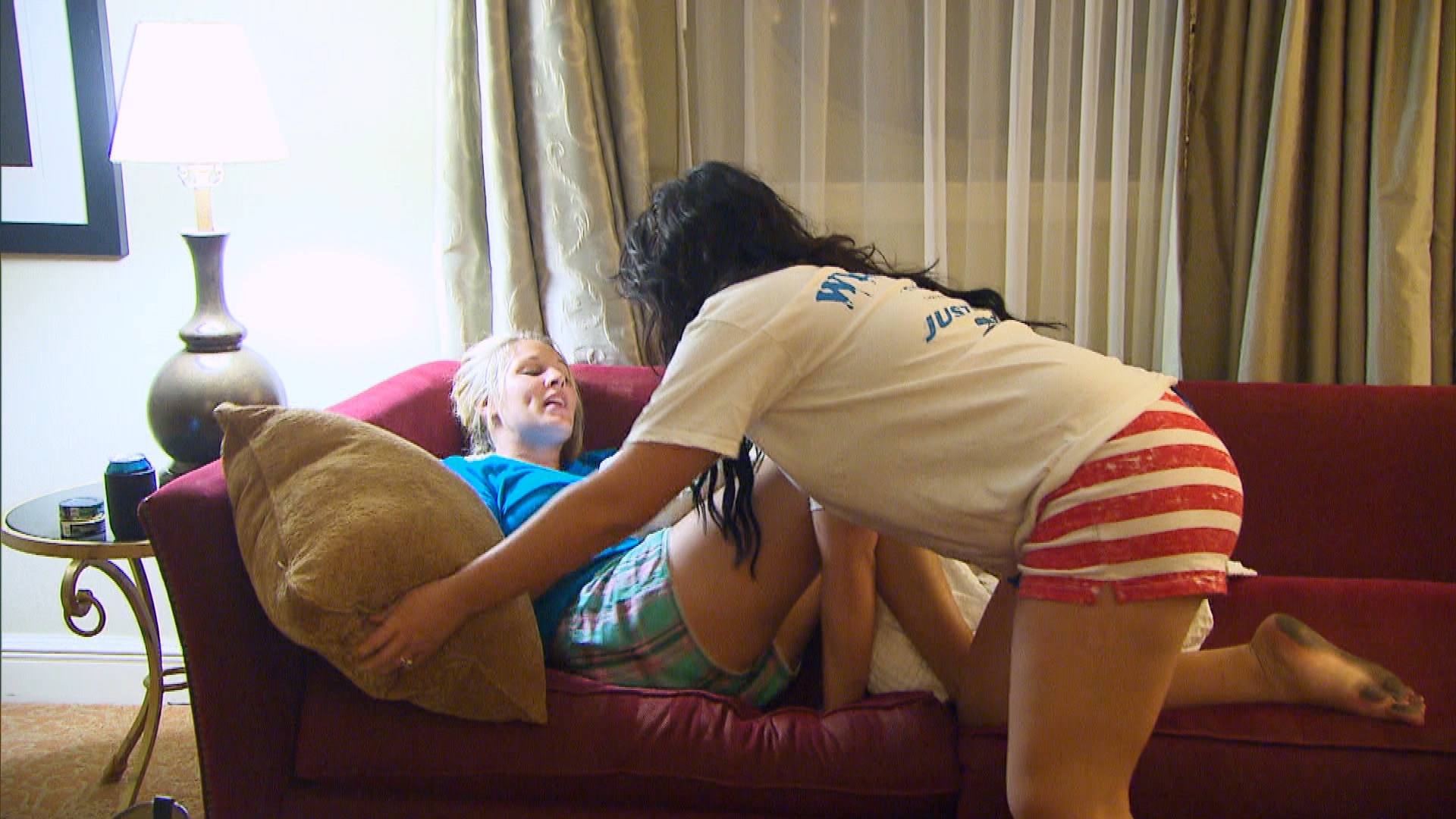 Unfortunately for Hott Dogg, Daddy runs into the same problem, so the only housemate to get lucky that night was Mattie. Who, for good measure, got lucky the next morning, too.

“Mattie and Jace actually went for round two in the morning, which inspired Hott Dogg and Daddy to try to get it going, too,” says Salsano, “but that didn’t work out so well for them.”

Sadly (for Mattie and viewers, and possibly also Hott Dogg and Daddy’s sex life), we may not get to see Jace’s cute face again on Party Down South. Then again, anything’s possible in reality TV, right?

Teases Salsano, “Unfortunately for Mattie, Jace was one of the things that stayed in New Orleans this season, but he is Lyle’s friend so you never know what will happen next season…”

The local wildlife wants to throw down, too

After returning from their road trip, everybody heads to the beach for a day of fun and relaxation, only to return and have that relaxation completely undone by coming home to a snake in the house.

To the housemate who yelled “red before black, he will attack”: Oh, honey. Somebody done steered you wrong. (For your future safety, it’s “red meets yellow, kills a fellow; red meets black, friend to Jack.”)

Murray, who clearly knows his stuff, simply picks up the corn snake and lets it free outside. Still, the snake isn’t the only critter plaguing the Party Down South-ers this season.

“The snake they found in the house was the least of the wildlife around that house in Biloxi,” exclaims Salsano. “There was a resident fox that Tiffany wanted to adopt, as well as raccoons that visited every night.”

“There was also a gator living in the bayou out back that liked to steal fish bait and was why the cast never swam out there,” she says.

The resident wildlife in the house drives Daddy to drink, which drives Murray to tease him about his problems with flaccidity. He claims he is trying to motivate Daddy and, damn, it might just have worked — Daddy and Hott Dogg actually seal the deal.

Say it with me now: Hallelujah.

“It must have been a full moon!” says Salsano, laughing. “Really, I think that everything did align just right and both Daddy and Hannah were on a mission at that point to make it happen. And thank God it did, because that whole house needed it!”

While Daddy denies he is now “wifed up,” Hott Dogg — who is met by the roommates with a round of applause — seems to be basking in the glow of their post-coital bliss.

Like Daddy, Murray just isn’t having it. “It’s not the bangin’ that bothers me, it’s the continual bangin’. That’s how you catch feelings.”

Heavens to Betsy, that would be bad. Don’t they have a vaccination for that yet?

One housemate who is definitely not giddy at the moment is Mattie, who woke up with constant pain in her gums. Daddy, likely fleeing from the uncomfortable next-morning convo with Hott Dogg, volunteers to take her to the dentist.

She suffers an unexpected blow, though, when she learns she can’t drink all week due to a bad gum infection. I can’t imagine this will play out well.

However, it isn’t Mattie’s gum infection that casts sullenness over the cast. Rather, it’s the phone call Tiff gets from her dad, Howie. His blood clots have gotten worse, so they are admitting him to the hospital.

And like any good Southern girl would, Tiff puts family first and heads home to take care of Howie.

“On set, everyone’s heart was breaking, too, both cast and crew, for Tiffany and Howie,” says Salsano. “Family always comes first, though, and you’ll have to keep watching to find out what happens and if she comes back.”

Why 160 hotdogs were harmed during the filming of this episode
Wait, did that chick seriously just punch Tiffany?
Hurricane Martha’s back — and winning bathroom twerk-offs