The death of a pet is a heartbreaking thing to go through, but usually just for the owner.

Or, at least, people who knew the pet. The tributes to Paris Hilton’s dog, Tinkerbell, that have shown up on Twitter today are a little over the top.

The fashion designer and reality star posted to her Instagram Tuesday afternoon to share the news that her beloved Chihuahua, who had been by Hilton’s side since The Simple Life, had passed away.

“My heart is broken,” she wrote. “I am so sad & devastated. After 14 amazing years together my baby Tinkerbell has passed away of old age. I feel like I’ve lost a member of my family. She was such a special & incredible soul. We went through so much together, I can’t believe she’s gone. I will miss her & think about her for the rest of my life. I love you Tinky, you are a Legend & will never be forgotten.” 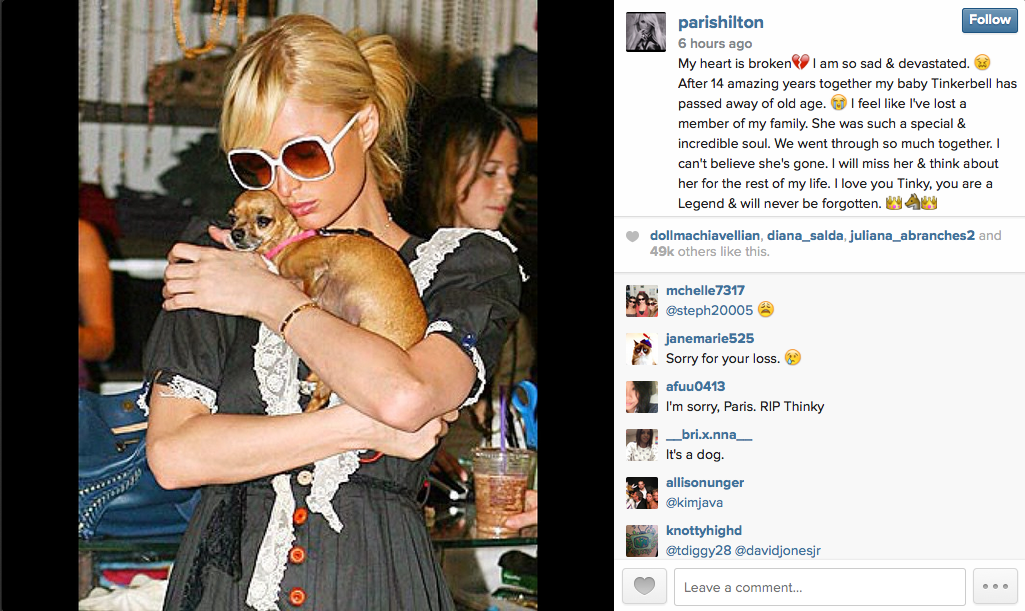 Tinkerbell was the dog who started the dogs-as-accessories trend. She was tucked into Hilton’s purse on red carpets and resting on Hilton’s arm as she walked Hollywood. She made frequent appearances on Hilton’s TV shows and social media accounts. She was loved by Hilton’s fans, for sure.

But the way some of them are reacting? You’d think their own mothers died, not a dog they’ve never met. Check out some of the most dramatic posts by Hilton’s fans below:

Despite being a little weirded out by the intensity of Paris Hilton’s fans, we sincerely wish the best for the heiress as she mourns the passing of her longtime pet. Rest in peace, Tinkerbell!

More: Paris Hilton vs. Kim Kardashian: Who did it first?

Do you think Paris Hilton’s fans’ reactions to the news about Tinkerbell are justified? Or do you think they’re taking their mourning too far? We’d love to hear what you think — head down to the comments and let us know!