What would we do without dads?

For one, we’d probably spend less time being publicly embarrassed. Dads love to drop a good dad joke, and the more public the venue, the better. Just ask Ariana Grande’s dad, Edward Butera, who just proved that you can be one of the most famous pop stars in the world and your dad still gets to embarrass you on the internet.

Granted, the way Butera went about it is definitely embarrassing, but it’s also very sweet and protective. We’d all be lucky to have a dad this willing to look out for his little girl (and with this sense of humor!).

Big Sean, who definitely got caught in the parental embarrassment crosshairs on this one, made the mistake of posting a selfie to Instagram with the caption, “I give her that D… #Detroit.” 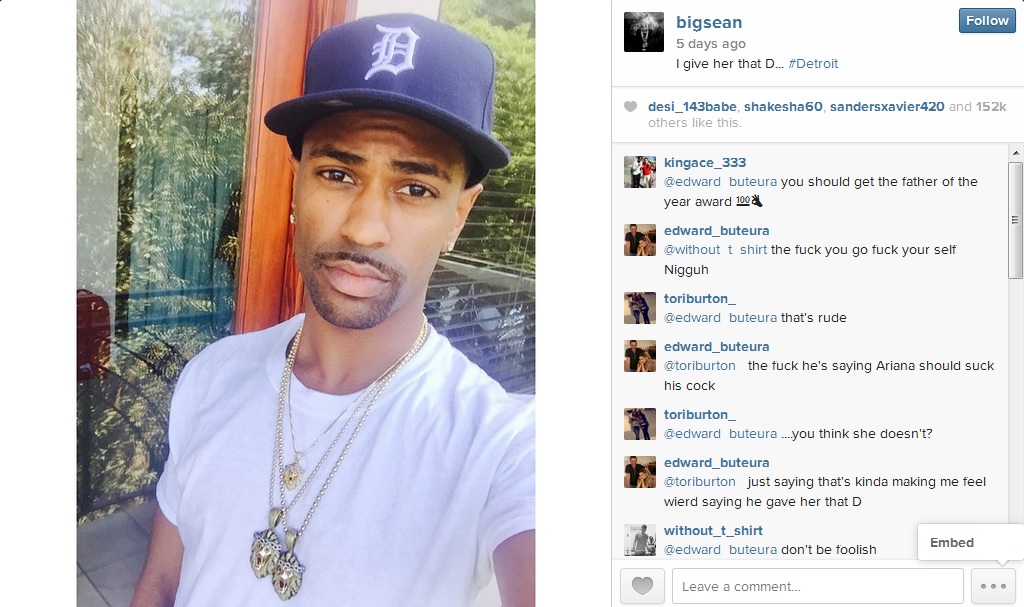 More: Is Ariana Grande trying to redeem her image with the ‘One Last Time’ video?

Now, that hashtag tells us the caption is very likely referencing Kanye West’s song, “Mercy,” in which the line “I give her that D” actually does refer to Detroit. Big Sean’s Detroit Tigers hat backs that theory up. But just in case this was a covert attempt to put the details of his sex life on blast online, Papa Butera was ready to call it out.

“That D. better be Detroit Sean,” he commented on the photo. Awkward.

Other acceptable things “D” could stand for in this case include daffodils, daisies and doting respect and admiration. We’re sure he meant one of those.

Ariana and Big Sean have been together since last year, when they were caught showing a little PDA backstage at the MTV Video Music Awards. They’re still going strong, but probably not for long if Big Sean keeps messing with Dad like this.

UPDATE April 21, 2015: Sadly, it turns out that while Grande’s father probably does share the sentiment of that Instagram comment, he didn’t actually write it. The singer’s publicist confirmed to E! News that the Instagram account purported to belong to Edward Butera is a fake, and he himself tweeted the same.

What do you think about Ariana Grande’s dad’s comments toward her BF? What’s the most embarrassing thing your dad ever did in front of a BF? Share your best story down in the comments.