Kim Kardashian spent the last few days getting her spirituality on in the Holy Land with her family, but according to one newspaper, only Kanye West is worthy of coverage.

The reality television star moved on to Israel after her jaunt to Armenia, and while there, she and Kanye West had their daughter North baptized and enjoyed dinner with Jerusalem Mayor Nir Barkat — but when an ultra-Orthodox paper covered the visit, they blurred Kim out of a photo and covered her up with a receipt in another.

More: Kanye West walks on water, makes everyone a believer in Yeezus (PHOTO)

Here is how the original photo appeared. 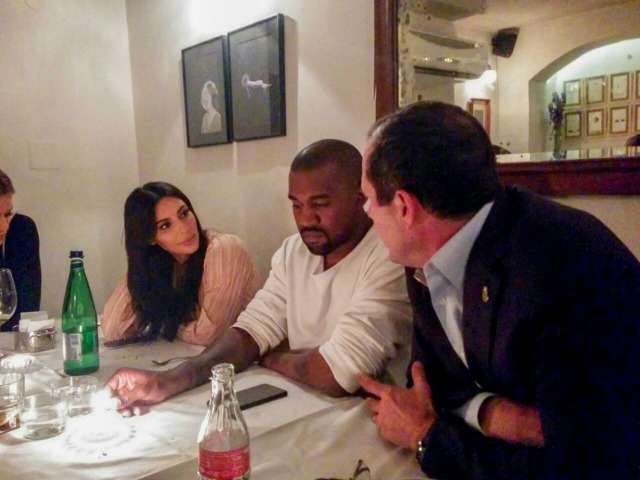 Adding insult to injury, Kim wasn’t even named in Kikar HaShabbat’s article, referred to only as “singer Kanye West’s wife.”

The site’s editor Nissim Ben Haim said that Kim’s image was removed because she is a “pornographic symbol” and the antithesis of Orthodox values, but that wasn’t their only complaint — they were also disturbed that the mayor was not keeping kosher with his meal, enjoying a dish of chicken and butter together.

In addition to Kim’s inauspicious beginnings as the star of a homemade sex tape with her ex-boyfriend Ray J, more recently she attempted to break the internet with her full frontal nudes on the cover of Paper magazine.

The slight did not put a damper on the family’s trip, however. They even made time to visit the site where the faithful believe Jesus was crucified.

More: The Kardashians can’t park in Hollywood anymore — here’s why