Hurricane season is in full force on Party Down South! Last week, a night out at the bar left Martha barreling through the house.

Batten down the hatches — and keg

You know things are getting real when someone kicks over a keg, right? Then, taking a page from Daddy’s book, Hurricane Martha even decides to toss a few random objects into the pool. (Note to self: Throwing shit into the pool seems cathartic; must make it a point to try this method out.)

“Hurricane Martha was definitely up there, I think because it was the first time Martha came out in Biloxi,” says SallyAnn Salsano, 495 Productions president and founder and creator/executive producer of Party Down South. “I’d say it rated somewhere between a category 4 and category 5. Thankfully, Daddy had already broken everything…”

Luckily, the housemates get a brief reprieve from Martha’s gale-force anger, thanks to the eloquent musings of Tiff… the Martha whisperer.

“You are my inspiration,” Tiff tells Mattie. “You are my positive Patrina. I need you to be my lucky elephant.” 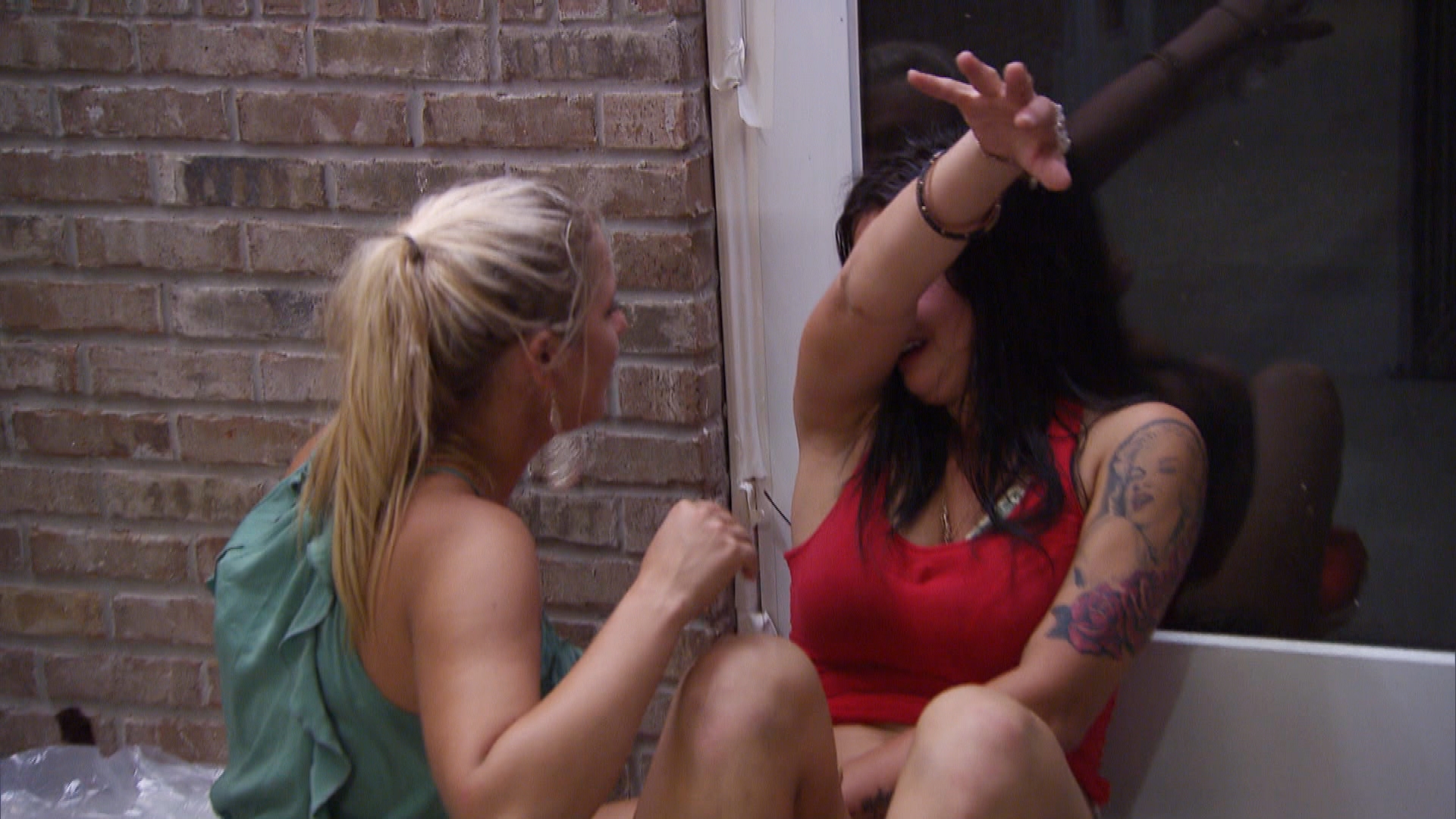 Wait, say what? Apparently the key to calming down a mad drunk person is simply to talk like a happy drunk person. Lesson learned.

Shortly after trumpeting her arm like an elephant calms her down, Mattie heads inside the house where Hott Dogg almost immediately tells Mattie everyone is talking about her being Martha. Face, meet palm. Or, in the words of Tiff, “The first rule of Martha is you don’t call Martha Martha.”

It’s like fight club. Only with inebriated country chicks.

“Tell everybody I went Martha,” Mattie yells, charging towards the cameraman. “C’mon, come watch this.” Hott Dogg, realizing she stirred up a hornet’s nest, retreats to the bed with Daddy. When Mattie, er, Martha comes in on a rampage, Lyle does the only thing he can think to break the tension.

Break out his wiener. That’s right, folks. Boudreaux gets nekkid, offers up a bear hug in the face and then dangles his two potatoes and baby carrot to calm down Martha. That’s what true friendship looks like… you know, uh, a helicoptering wiener. 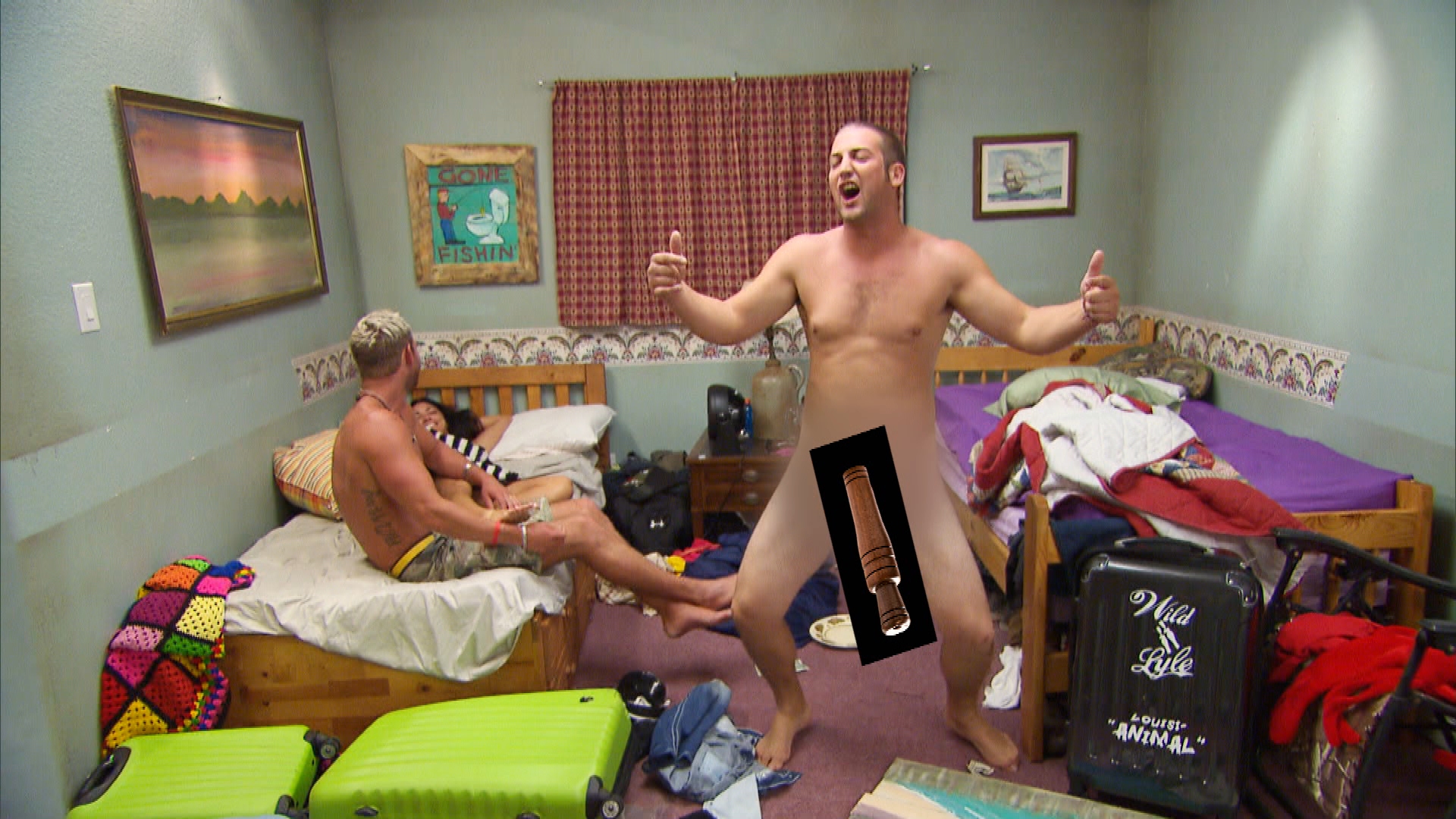 Don’t pretend it didn’t give you the warm fuzzies, too.

Mattie finds it pretty hilarious, until she doesn’t. “Nah, don’t f*** with me,” she says, still insisting she is leaving the house.

Looking for love in all the wrong places

Meanwhile, Walt and Murray decide to flee the drama and head to the pool. Walt feels confident he’s headed towards a hookup with Lauren’s friend Harmony, although he can do little more than stare blankly at her boobs the entire time they are in the pool.

Alas, the ladies decide it’s a bit too chilly to swim and head upstairs. “Once again, I’m going to bed alone,” laments poor Walt. C’mon, ladies… someone throw this guy a bone. (Or, rather, let him throw you his.) Although, I suppose I shouldn’t feel too sorry for him just yet.

As Lauren and her friends head upstairs, Hurricane Martha is heading down — she’s done with this house, she vows. Daddy goes after her, all the while conceiving what may be the best-ever drunk person preparedness plan.

“I think when Mattie turns into Martha, we need to have a hamburger cooked and ready to go. That would solve a lot of drama.” Amen to that, brother.

Mattie storms off until, well, it starts to actually storm. So she decides to pack it in and head back upstairs. The next morning, she opens her backpack to reveal that she had all the life necessities needed to survive on her own: her slippers, her unicorn, Marilyn Monroe and Bob Marley, her deodorant, her power crunch bars, wipes, her wallet and one flip-flop. 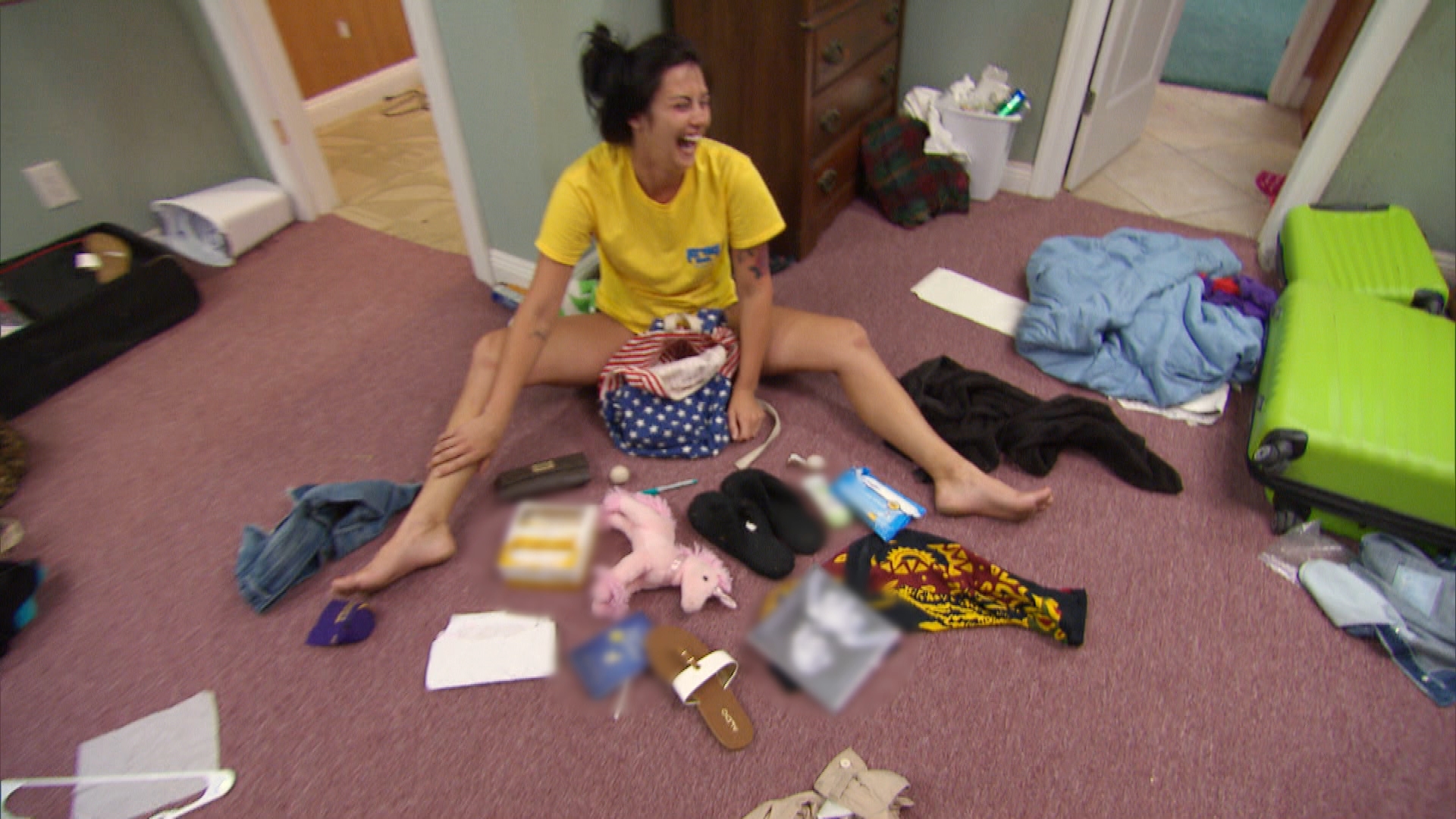 Boys’ night out… down and out

Later, Murray and Walt decide to go fishing. While bonding shirtless on the dock, they decide to have a boys’ night to draw Daddy out of his Hott Dogg phase.

However, there was one hitch in their pony, so to speak. They decided to hit up Reno Sports Club, where the beards are aplenty and the women aren’t many.

Confirms Salsano, “There were absolutely no chicks around that night. I think that was the flaw in the guys’ plan. They took Daddy out to the neighborhood dive bar instead of going out where the ‘marlins’ were. Maybe Daddy would have stayed out if there had been girls there.”

On the plus side, Murray scores some chick’s number — across his chest, no less — and Lyle gets yet another opportunity to show off his impressive upchuck reflexes.

Perhaps sensing the night was going to blow (chunks?), Daddy decides to ditch the boys and head back to seal the deal with Hott Dogg. Or so he says.

When Walt and Murray get back to the house, though, they find Daddy just chilling by the pool with Hott Dogg. They give Daddy hell about it and when he retreats, they give Hott Dogg hell, too.

She eventually gets irritated enough to walk away, but winds up exactly where Murray and Walt wanted her — in Daddy’s arms. It does not end well.

“I’ve never been with a guy that cannot keep it up,” Hott Dogg vents about five minutes later. “It’s not Daddy hard, it’s Daddy hardly.” OK, that was funny.

The next morning, Murray and Walt have angrily-shaming-our-housemates-into-sex remorse and decide to apologize to Hott Dogg on the porch.

She accepts their apology. “I like him, I do,” she explains of Daddy. “I wouldn’t be doing this if I didn’t like him.” She hugs Murray, who has to poop. “I’m actively trying not to shit on myself right now,” Murray says, thus wrapping up the Hallmark moment.

Tiffany decides she wants to go to CJs for lunch, where the housemates — minus Mattie and Hott Dogg —decide to address the whole Hott Dogg situation with Daddy.

When Tiff and Lauren point out that Hott Dogg has legitimate feelings for him, he responds with, “Looks like I have a problem.” Hmm… this does not bode well for a drama-free house.

A ladies’ night to remember

Later that night, the whole gang decides to head out for ladies’ night at Kahuna’s. Free drinks? Um, yes please!

Right off the bat, a chick in a green shirt starts chatting up Murray. “You’re so cute,” she flirts. “I love you. You’re awesome.” She immediately strikes me as a bit Fatal Attraction-y, but Murray doesn’t seem alarmed. Yet.

At the bar, Hott Dogg asks Daddy why he is so bummed out and he drops the “we can only be friends” bomb, explaining he did this before. “No, you did this before with a f***ing child who didn’t know what she wanted,” she yells.

They don’t have time to dwell on it long, though. As Mattie and Hott Dogg hit the dance floor, Murray’s spirited green shirt chick starts taunting them.

In an act of true selflessness, Murray abandons any shot he might have at getting laid that night and tells the girl to back off his bitches. Well, you know, he might have phrased it a bit differently.

He then walks Tiff and Mattie out since they are less than sober and they sit outside as they wait for the cab.

Seemingly out of nowhere, green shirt chick pops up and continues to taunt Tiff. “Nasty, nasty bitch. You look stupid.” Seriously, who the hell is this girl and what is her malfunction? 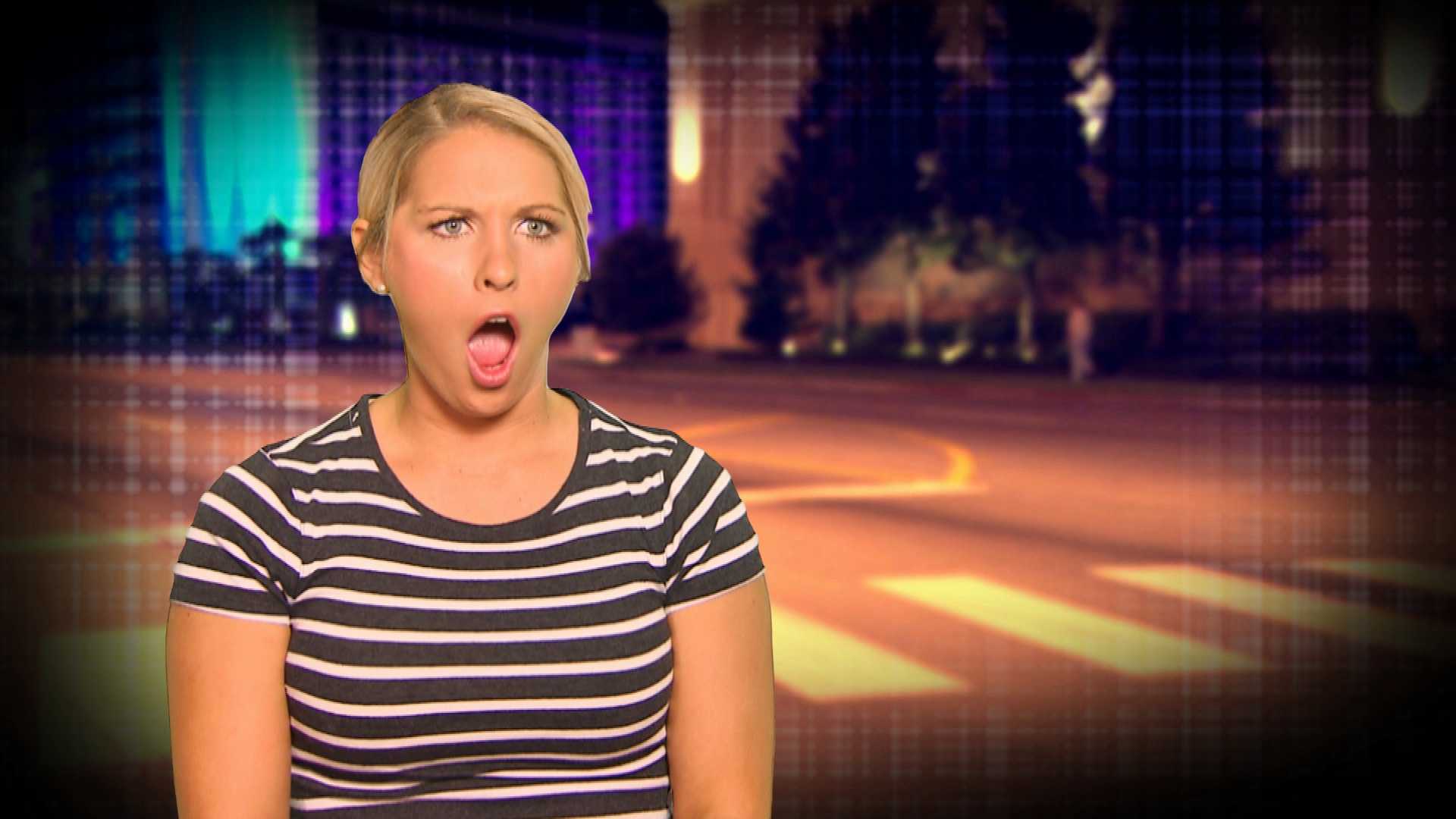 And then, really out of nowhere, she throws a punch at Tiff. Bad move, chickie. Bad move. Mattie literally leaps across the patio and clocks the girl. Yes, I squealed at this moment like a silly, excitable girl. Mattie is my new hero.

Still, no one saw this coming — it took everyone by surprise (perhaps none more so than Murray).

“It completely did!” affirms Salsano. “Mattie, Tiffany and Murray were ready to head home and were just waiting on the taxi. In fact, we all thought that Mattie had fallen asleep at that table when out of nowhere the girl in the green shirt started calling the girls names and then went for Tiffany.”

It was such a blur, in fact, they barely caught it. “Mattie immediately jumped up and had Tiffany’s back. It was crazy because it happened so fast and we barely had the cameras there to catch it!”

Naturally, there were a few things the cameras didn’t catch.

“Well, Lyle did almost burn the house down… with a toaster. Like for real, you see flames,” says Salsano, laughing. “Another thing that didn’t make air was the cast singing karaoke at the bar. Turns out they’re actually good singers, especially Lauren.”

5 hrs ago
by Sarah Mina Osman