We all know by now that music festivals have been a very male-centric affair. While we’ve seen a very slight increase in female artists on music festival lineups, the sad reality is there aren’t enough.

A few months ago, music blog Crack in the Road tweeted out an image of an edited Reading & Leeds music festival poster stripped of the male acts and included only bands that had at least one female musician:

How it would look if the Reading / Leeds line-up only included the acts that have a female musician in the band. pic.twitter.com/xpEgI0gNUB

So, we had to know: What do other larger music festival lineups look like?

We took a look at Summerfest, Firefly, Governors Ball, Bonnaroo, CMA Music Festival, Lollapalooza and Coachella — and were sincerely blown away with how jarring these images are.

*Click on the images to open up a larger version. 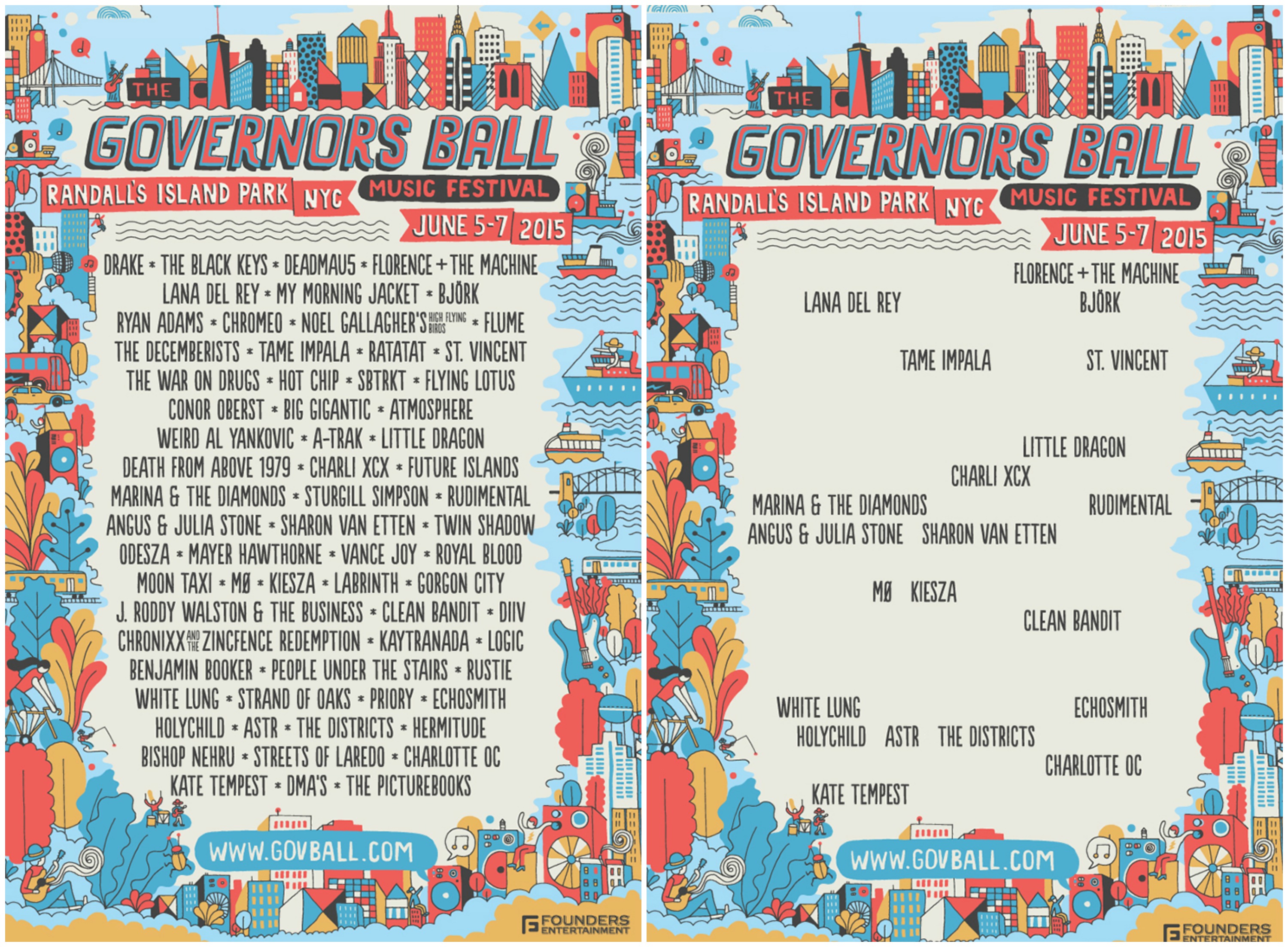 We found that Governors Ball, a music festival in NYC, had the most female inclusion — at 30 percent. The lineup includes a total of 66 artists, 20 of them female. 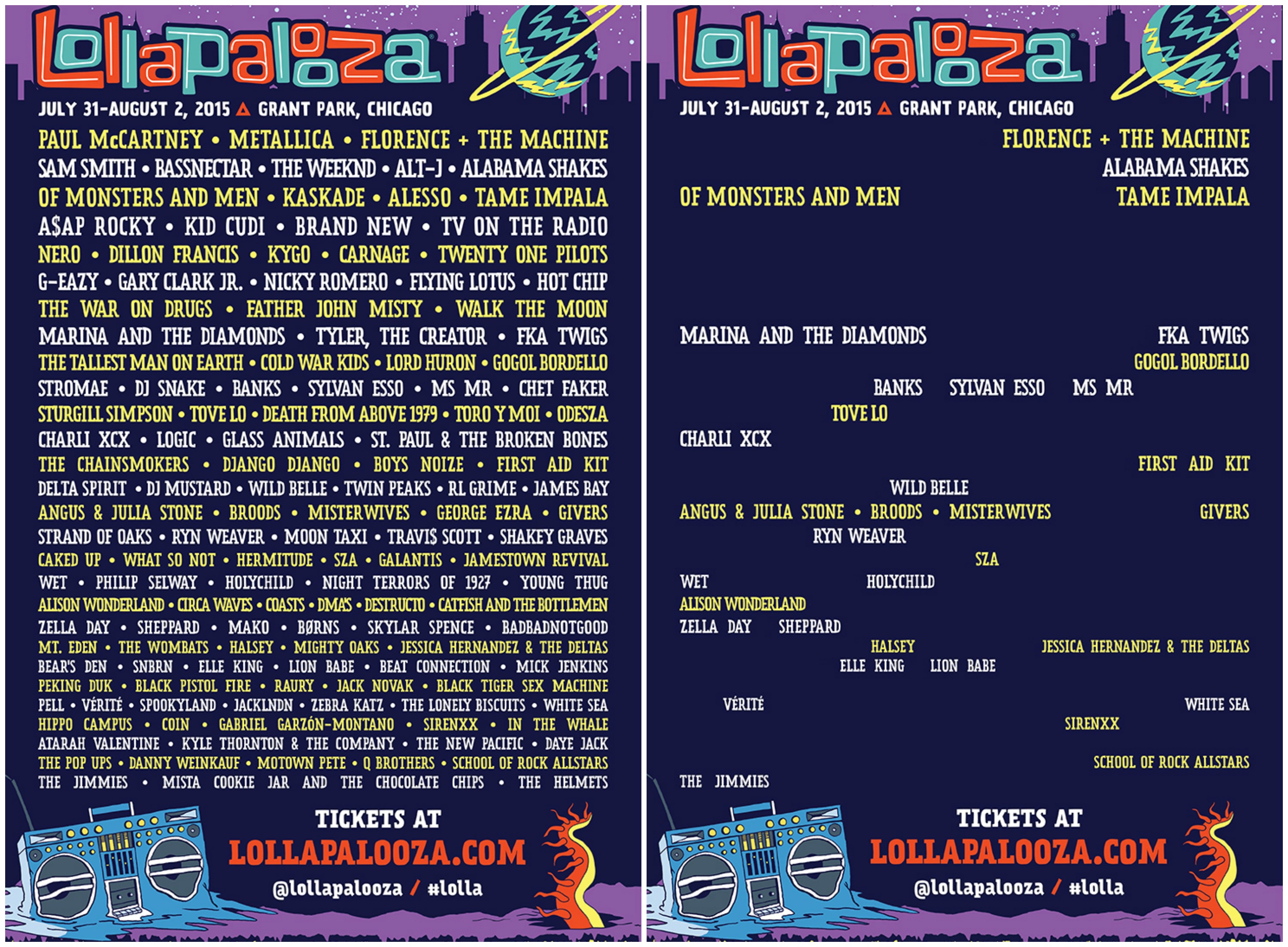 Lollapalooza — one of the most popular music festivals in the United States, located in Chicago — has a total of 135 artists on the lineup, 34 of them including at least one female member. That makes this lineup 75 percent male. 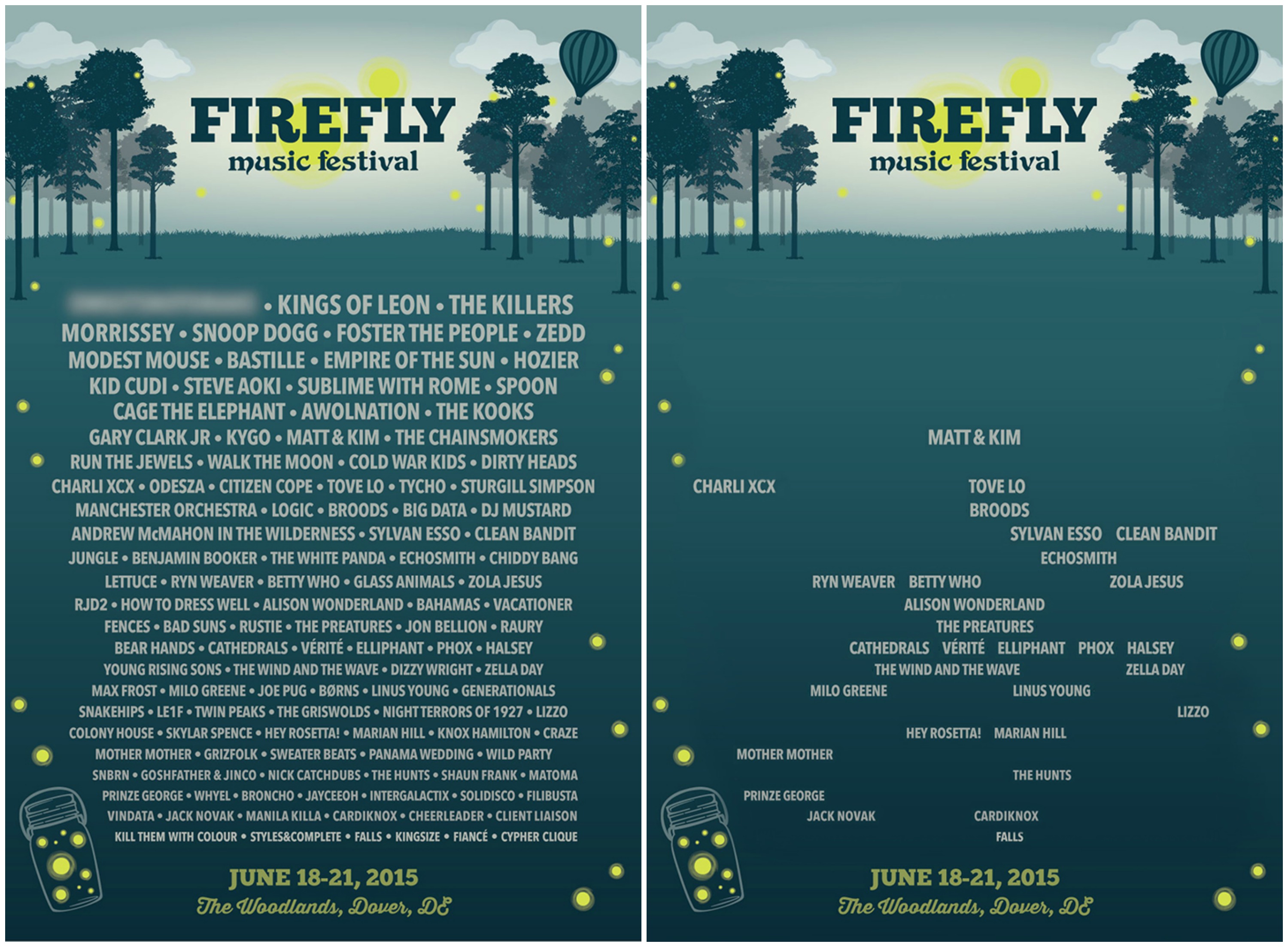 Ranking right below Lollapalooza is Firefly Music Festival, located in Delaware. The festival has a total of 119 acts listed, 29 of them female. 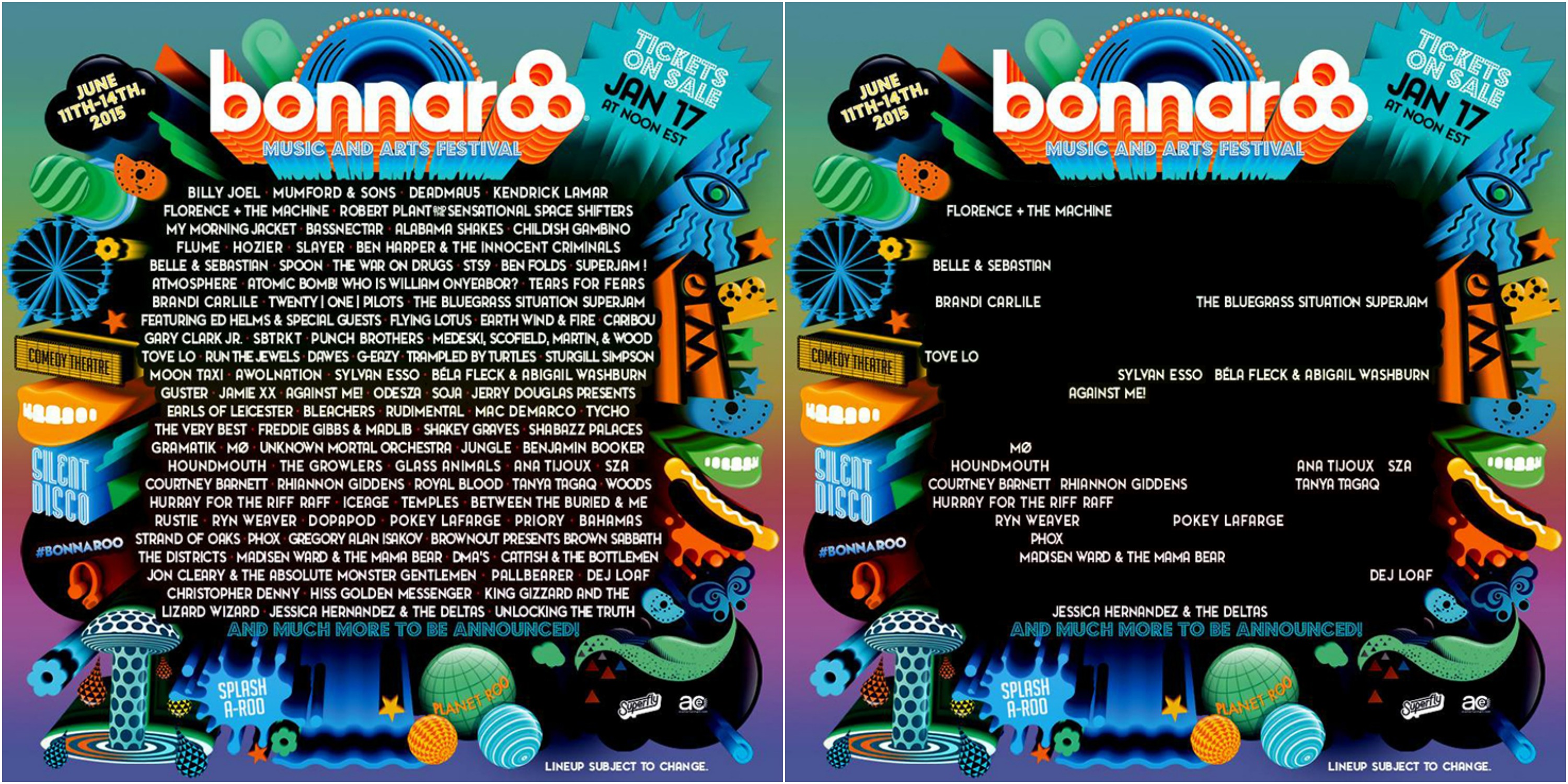 Held in Manchester, Tennessee, Bonnaroo has more than 75 percent of its lineup comprised of bands entirely of men. It has a total of 100 acts listed, 23 of them female. 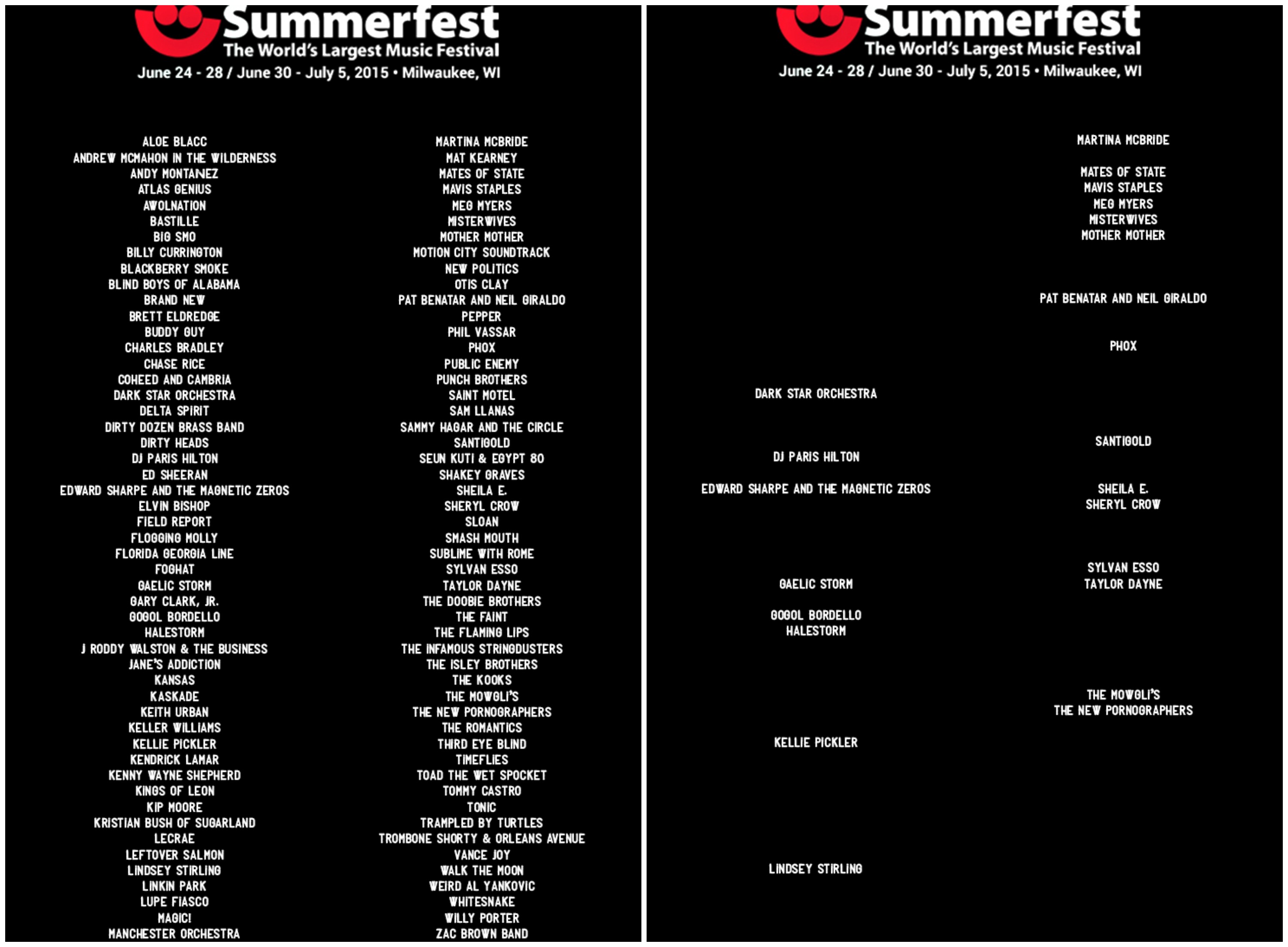 Considered the “world’s largest music festival,” Summerfest, located in Wisconsin, has a total of 111 artists, 23 of them having at least one female member. 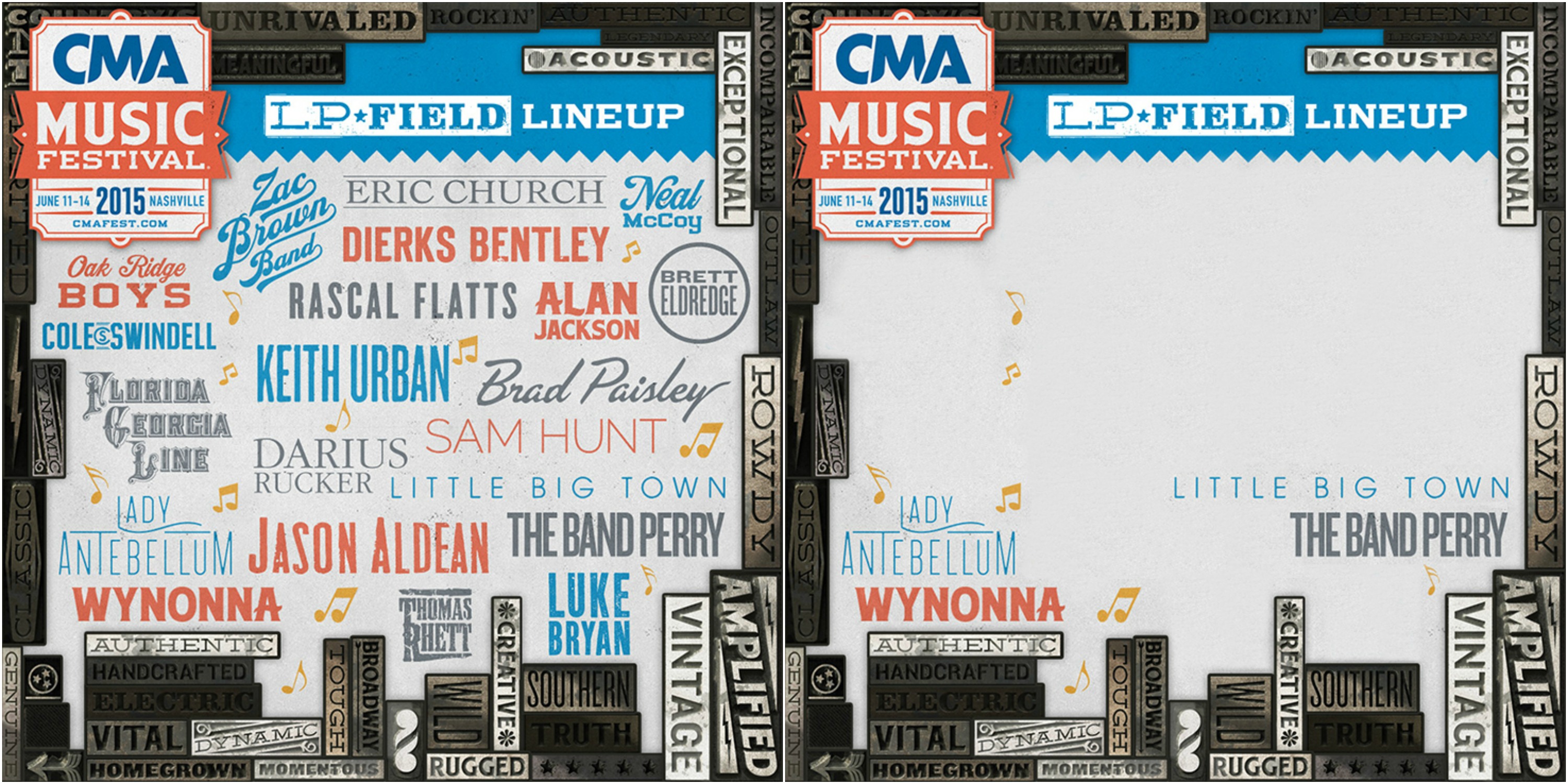 Although the CMA Music Festival — located in Nashville, Tennessee — has just 21 country awards acts on its lineup, only four are female. 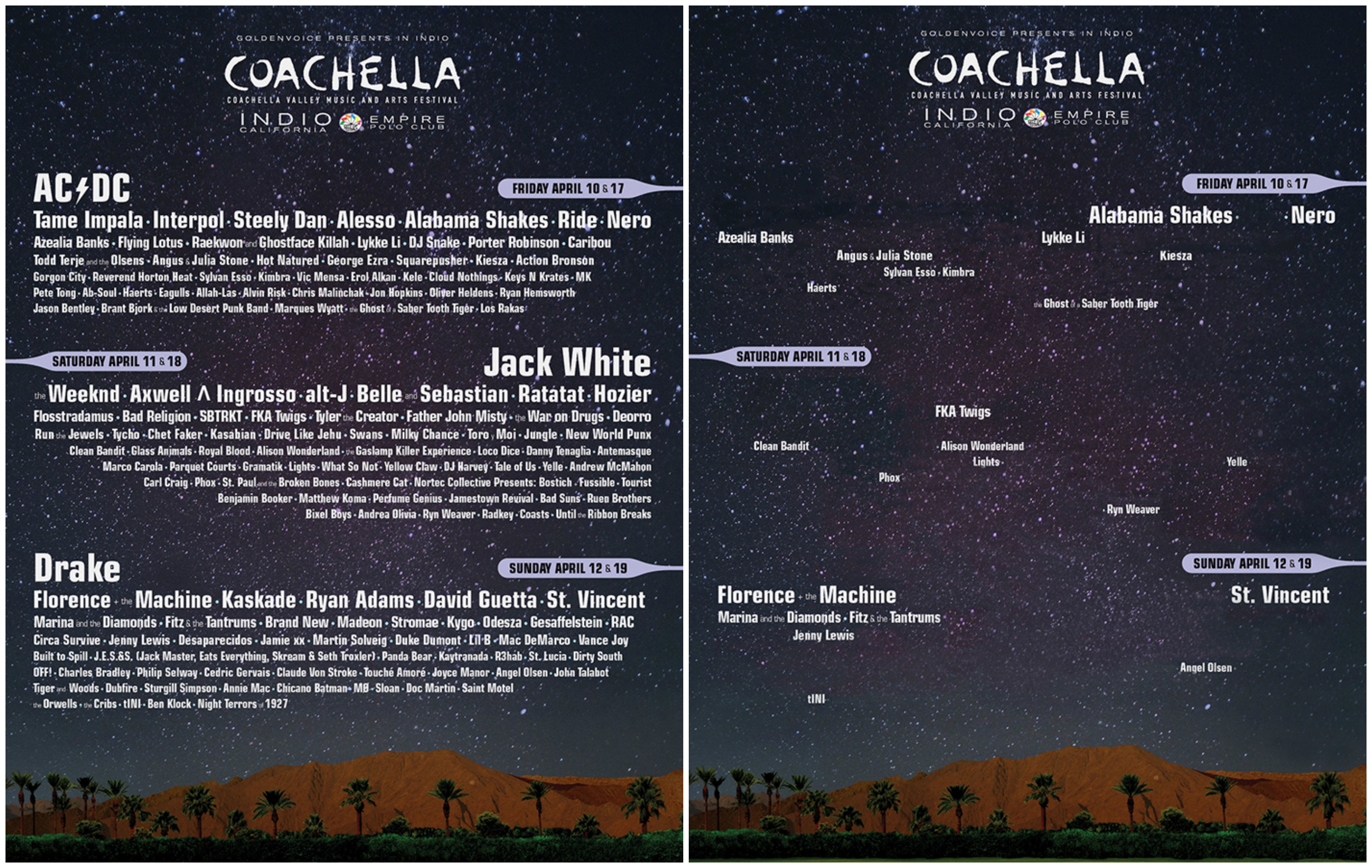 This is the biggest offender. Coachella has a total of 162 bands spread out through its three-day event; however, only 22 are female.

Are festival organizers aware that this is happening? Of course. Do they care? Probably not. This is nothing new, but with reports showing that festivalgoers skew slightly more female — for instance, the UK Festival Census 2013 states 42 percent were male and 58 percent were female — why hasn’t this changed? There surely isn’t a lack of female artists out there.

In fact, SheKnows Expert and female electropop musician Lori Steele was shocked when she saw the lineups. “To have that large of a discrepancy feels insane!

“As a musician, I feel slightly unnerved with the lack of female-led artists in the lineup,” she adds. “There are so many talented female-fronted bands and DJs that aren’t being represented, and I feel that in order to change this we — as music purchasers, downloaders and streamers — need to support these acts through streaming, downloading and attending shows that they play. Like any other business, a music festival’s goal is to be profitable. Sure, each has its own spin, whether it’s sourcing new music, environmental awareness, etc., but if they don’t make money they can’t pay the staff, artists, venue, etc.”

But this isn’t the first time this has been addressed. An article from Salon published in 2013 dives into the sexism in the music industry. The article asks: Why have festivals become a boys club? According to rock critic Evelyn McDonnell:

“I certainly don’t think it’s because booking companies are saying, ‘Oh, we’re going to put women at the bottom of the lineup.’ The men of power who are in this industry have this internalized, institutionalized sexism. They see men as having economic power and therefore get billed.”

Can we change this? Steele thinks so, stressing the importance of support for female artists.

“One can shout as loud as possible and stomp feet demanding more female artists,” Steele adds, “but it won’t change the fact that it’s a business. So we should treat it as such and do our part in supporting the underserved female acts we love.”

Tell us: Have these posters changed your mind about music festivals and should music festival organizers strive for more gender equality in their respective lineups?