WGN America’s first scripted series, Salem, earned record viewership for the network and was quickly renewed. Season 2 is right around the corner and, from what we’ve seen, it’s bound to blow your mind.

More: Gasp! Is the set cursed?

With such a nail-biting first season, what could Salem Season 2 bring to the table? Changes are afoot for the residents of Salem, and it looks like new and old blood will stir up the entire town.

1. Lucy Lawless is coming to town

SheKnows chatted with Salem‘s cocreator, Brannon Braga, earlier this year and got the inside scoop on Lucy Lawless’ appearance in Salem. He told us straight from the get-go that Lawless’ character, Marburg, brings major changes and that no one is immune to her powers.

“She’s a villain this year, but she’s probably the main threat to Mary,” Braga said. “Mary has all sorts of threats within, but this Germanic witch comes to town because she sensed the Grand Rite happened and she wants to know who did it and she intends to take it over. Lucy’s great and she and Janet [who plays Mary Sibley] are really forceful together. Very cool.”

When we last saw young Anne, she’d just exploded her parents’ heads. Practically left an orphan and now surviving with the knowledge that powerful witch blood runs through her veins, how will she survive? Bragga says Anne will find guidance in the most unlikely place possible. And when we see her again in Season 2, things are looking bleak.

“I think she [is] in a state of extreme distress,” Bragga said of Anne’s decision in the pilot. “And the only person, ironically, who could pull her out was her nemesis, Mary, who will become her mentor.”

More: That time Cotton hung out in the cathouse

Aside from the obvious struggle between Puritans and witches, Salem Season 2 will also further investigate the struggle between men and women. During Season 1, Mary Sibley reigned supreme, thanks to her marriage to Mr. Sibley, and saw only Increase Mather as the real threat. With Increase out of the picture, Salem needed a new villain.

“What we realized that we were missing, with the death of Increase Mather, we were missing a Puritan villain, a human villain,” Bragga explained. “Cotton is not a good Puritan, he’s not a villain, really. So we invented this guy Hawthorne, who is the ultimate misogynist and an opportunist and kind of sees through Mary’s fraud and intends to topple her.”

Who is Dr. Wainwright and what is he doing in Salem? As the plague continues to ravage the town, the doctor will do his best to find where it started and find a way to cure it. While that surely ought to land him on Mary’s enemy list, it’s hard to imagine anyone could hate someone as yummy as Wainwright (Stuart Townsend). 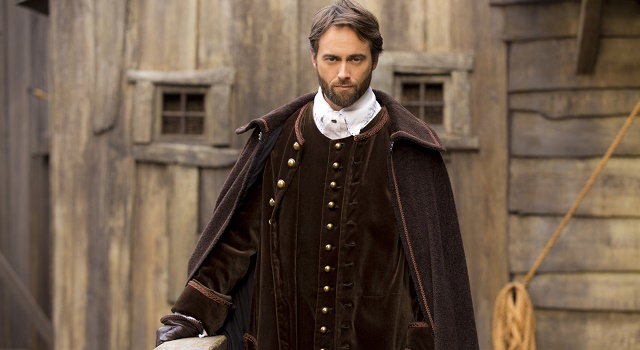 5. And something shady is going on with John Alden

We don’t want to completely spoil the first episode for you, but let’s just say John Alden hasn’t exactly been living his life like a Puritan… or a witch. In the final (and probably best) Salem Season 2 trailer before the premiere, you can catch a few glimpses of what we’re talking about. He’s shaved his hair (love it!), but what’s that fur cape about? Looks like you’ll have to wait until the premiere to find out!