Wow, we’ve got to hand it to Warner Bros. The new Mad Max trailer is genuine nonstop sensory overload, and yet — at two and a half minutes long — impressively sly with plot details. If you’re like us, you’re going to need to watch the trailer a few times before you can make sense of all of the crazy.

In fact, the new Mad Max: Fury Road trailer is so intense we had to break it into GIFs just to begin to make sense of it.

So here’s what you need to know before we get started: It’s the future. Humanity is an empty dried-out husk of what it once was, and the few remaining people that are left are locked in a death battle for the scant resources that remain.

Who are the pale people?

Tom Hardy plays Max Rockatansky, a desperate loner trying to move past the death of his wife and children, but because this is a Mad Max world, grieving in peace isn’t on the agenda. Instead, he gets chased by these weird, mole-like people who obviously spend all their time in the elaborate caves dug into the desert hills, before getting chased even harder by more crazy mole-people in crazy mole-people cars.

So, is branding people a thing?

And is that Tom Hardy’s neck? The skull motif reappears again and again in the trailer, making it pretty clear that the wild-haired creeper (below) wearing the skull mask is in charge, and those pale mole-people above are his loyal followers (shiver). No wonder Hardy is on the run. It’s the end of the world and this brand-wielding crazy man is your leader? No thanks!

But who is the skeleton guy? 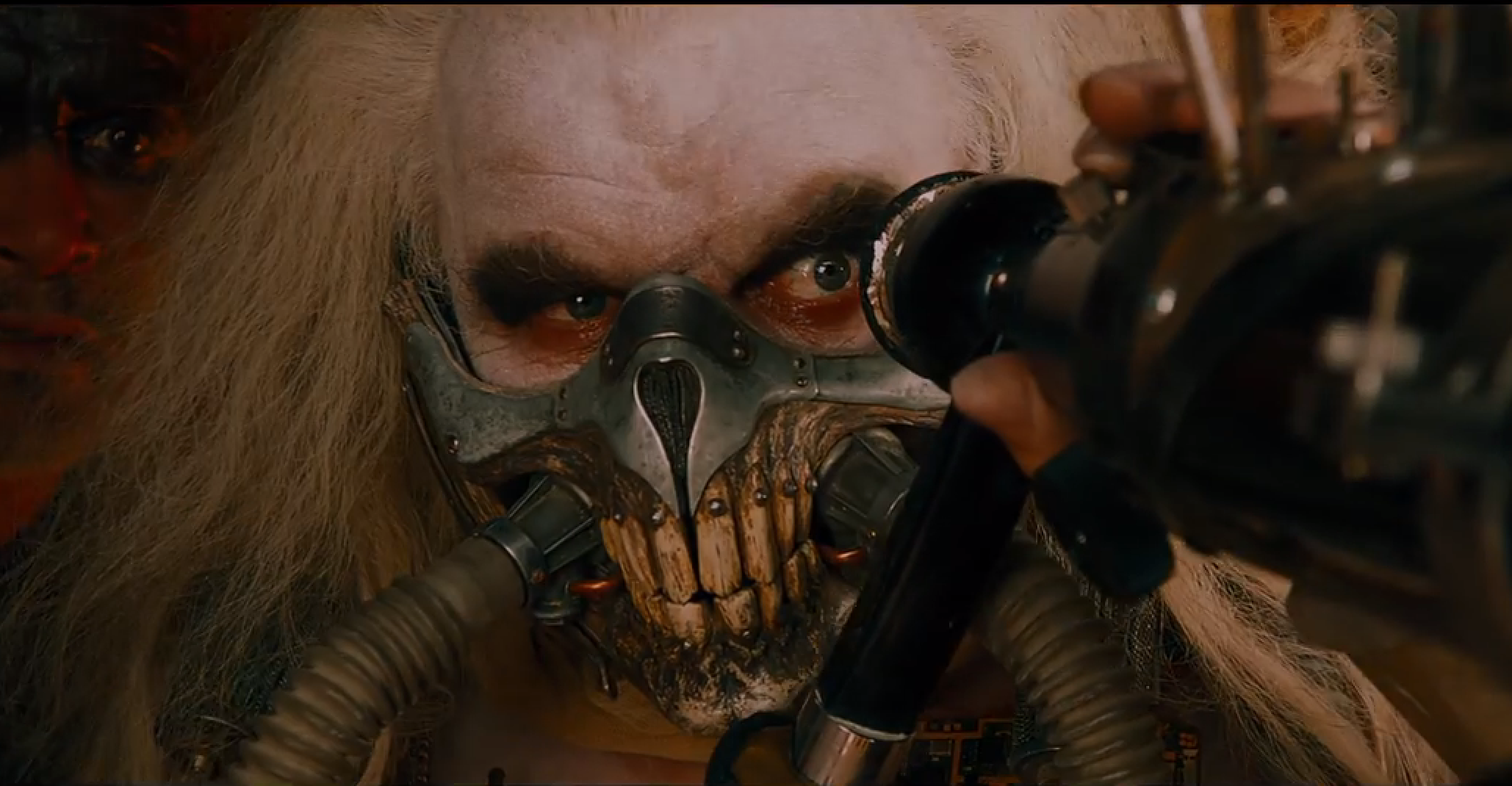 The trailer doesn’t tell us much about why or how the skull man, whose name is Immortan Joe, came into power, but it’s obvious he’s the one calling the shots. What has me confused is his insane breathing mask — what happened to this dude that he’s got to be plugged into oxygen ports all the time? Did Tom Hardy have serious Bane flashbacks staring into the face of this monstrosity? And why is he collecting and keeping women?

Jeeze! It’s the end of the world, and this joker’s still locking up women and treating them like objects. I’m instantly curious about the hows and whys that led to Immortan’s nasty habit of enslaving women, but I’m a hundred times more interested in Charlize Theron’s character, Furiosa, who seems to be the women’s liberator.

More: Old Hollywood movies you should pick up for your next girls’ night

The whole movie could be categorized as one long, super-madcap car chase. Apparently, once Furiosa steals Immortan’s women, the psycho proceeds to chase them through the desert with the most motley collection of vehicles and pale fighters you’ve ever seen. I’ve watched this sequence a half-dozen times and I keep noticing weirder and weirder things. Why is Hardy strapped to that pole? What’s up with the spikes on that car? Do future road warriors really jump from speeding vehicle to speeding vehicle and ever live to talk about it?

Umm, OK. What kind of dystopian overlord travels with his own drum section? In the back of a truck? And then stocks it with pale, long-haired drummers? I just can’t even.

In the future, there will be… pole dancers?

If the future means being able to balance atop poles precariously strapped to speeding cars careening through clouds of dust, count me out. I have no idea why any of this is happening, and it’s making me nervous.

In case of emergency, don’t forget your flame-throwing guitar

I have to admit — this is maybe the most ridiculous moment in the entire trailer, and yet, it’s my absolute favorite. Because it makes no sense. Because it is over the top, insane and perfectly suited to a movie that asks, “Who is crazier here? The man in power wearing a skeleton mask keeping women as pets, or the only man on the planet who seems to think there’s a better way to live?”

And at the end of the day, isn’t all the crazy exactly what you want out of a Mad Max movie? I mean, the trailer may leave you scratching your head, but it also left me breathless with anticipation.