It’s harder than you think to be a Hollywood hottie. Everything you do is under a media (and hater) microscope. Every pound dropped is cause for concern, every pound gained is reason for scrutiny. This week, all eyes are on Tara Reid.

More: Everything you need to know about Tara Reid’s new film

Can we give this girl a break, please? We’ve watched Tara Reid since she was in her early 20s. She’s gone from the super hot girl on every dude’s wall to the hot mess at the butt of every Hollywood joke. But she’s rebounded in the past few years. She’s owned her mistakes and even had fun pointing them out in interviews and roles. She’s also seen wild success with the Sharknado movie series. Girlfriend was doing OK, we thought. New pics of the tiny actress in a bikini on vacation in Miami, Florida, has people stumbling over one another to pass judgment and toss out a diagnosis.

First, of course, is the seemingly “concerned” diagnosis of anorexia. No one on Twitter or in the media is spending enough time with Reid to know if she has an eating disorder, much less what kind of disorder it might be. But that doesn’t stop people from taking their best guesses. Are they really concerned, though, or just using their worried tone to get away with passing judgment?

Then, Reid posted a smiling photo to her own Instagram. While she may not be Photoshopped to perfection, Reid was beaming with content. Everyone knows girls take a million selfies before finding just the right one. She chose the picture she posted on Instagram, which meant she felt good in her skin today.

Haters gonna hate, though. And despite the confidence she radiated, there were people who went straight for her throat. Forget faux concern: These people dished out straight hate. 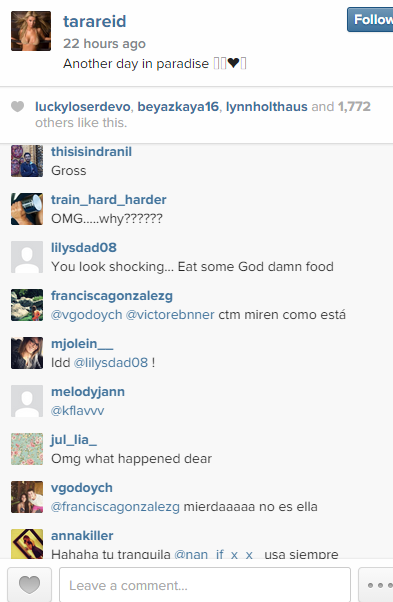 Luckily, some people understand that body shaming goes both ways. We were stoked to see a few girls calling people and the media out on their fake concern and high demands.