Fox just made our little sci-fi-loving hearts explode with excitement by announcing that The X-Files will be returning to the network with a limited six-episode run. We hope this means we’ll finally get some answers to the biggest X-Files mysteries.

More: X-Files: How we respond to aliens vs. Mulder and Scully — in GIFsIt’s been 13 years since The X-Files went off the air, but fans have never given up hope that Agents Mulder and Scully would return. Every time David Duchovny and Gillian Anderson were seen together, rumors would fly that a revival was imminent. Now that Fox has announced the return of the series, complete with show creator Chris Carter, and both Duchovny and Anderson on board, our imaginations can finally run wild with anticipation.

Here are the seven biggest mysteries we hope the new run finally solves.

Where the heck was Mulder?

After getting abducted at the end of Season 7, the show introduced Robert Patrick as agent John Doggett and fans got understandably angry. How were we to continue eavesdropping on Scully and Mulder’s interminable foreplay without freakin’ Mulder? As Season 8 stretched on, however, we began to resign ourselves to the fact that Duchovny was moving on from The X-Files, and we began to get used to seeing the Terminator T-1000’s mug fight baddies with Scully every week instead of our beloved Mulder.

When Mulder returned in the middle of Season 8, it was only to let us know he had survived alien experimentation and would be going underground again for the rest of the series, only showing up at the tail end of things to wax poetic about ghosts and alien invasions. So we want to know: What the heck happened aboard the spacecraft, and what the heck was Mulder doing in New Mexico between his return and the end of the series?

Did Doggett and Reyes get together? And will they return? 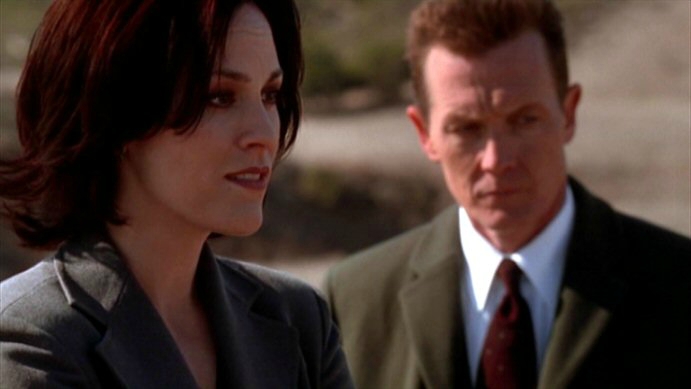 Image: 20th Century Fox Television
Robert Patrick and Annabeth Gish had a hard time winning over die-hard fans, but that doesn’t mean we didn’t grow to care about them as well. As weird as it would be to try to bring these characters back along with Mulder and Scully, it might be nice to find out if the couple made a successful go of it. Also, since the series is only six episodes, hoping for a few cameos isn’t a stretch.

Who has replaced the Smoking Man?

Unless they plan on un-killing the Smoking Man again, someone new will have to take point as the shadowy figurehead of all things conspiracy. Time and again, the Smoking Man would show up with secret information and hidden agendas, steering Mulder toward greater danger and deep conspiracies. Although Chris Carter has said the new X-Files will focus on monster-of-the-week story lines, he also told The Daily Beast that the revival would feature a balance of the X-Files mythology to simpler stand-alone episodes, which means diving back into those deliciously mysterious organizations pulling the alien strings and the new or returning creepy creepsters (like the Smoking Man) who are in charge.

What happened to Scully’s son?

Listen, this is probably the biggest question we have. It’s pretty obvious by the end of the show that the child Scully gave up for adoption at the end of Season 9 was Mulder’s son, and she just up and drops him off at a farmhouse after giving him a presumed antidote for his alien-like powers. What? If Chris Carter doesn’t pick up this story line and let us know what the heck has become of Mulder and Scully’s miracle baby, we might not be able to deal.

The alien invasion that never happened

One of the things The X-Files did well was to sync up as much as possible with present-day timelines. It even ended with a doomsday date of Dec. 22, 2012, which matched up with the end of the Mayan calendar that was at the time causing panic in real life. However, it’s now 2015 and the world didn’t end, so what happened to prevent the invasion? Or will the new series pick up in a post-alien invasion world? Are Chris Carter and company planning the series around a slower, more insidious alien invasion that syncs up with recent events? In today’s crazy world, it may be easier than ever to find alien connections in current happenings without having to take too much creative license.

Are Scully and Mulder agents again?

In the X-Files 2008 movie I Want to Believe, neither Scully nor Mulder were working for the FBI anymore, and Mulder was still a wanted man. Having helped solve the mysteries plaguing the FBI about that film’s X-file, we have to presume Mulder received his promised pardon, but then what happened to him? Did Mulder and Scully once again pick up the badge, or will this new revival see them working covertly under special request from Skinner?

Are Mulder and Scully still getting it on?

Come on, admit it: when you saw Scully and Mulder were living together in I Still Believe, you kind of screamed inside in excitement. In true X-Files fashion, however, the film treated their romantic relationship as secondary to the case. Now that they’re coming back to television, will Carter keep the couple a couple, or fashion some way to keep their relationship frustratingly ambiguous?

More: Why I tell my kids they’re part alien

No matter what happens, Fox would be missing the boat entirely if they didn’t seriously take advantage of the online fandom and create a monster online resource for the revival. (Look at Lionsgate and their successful Hunger Games web presence.)  So here’s hoping they hurry up and get started on one to help us pass the time between now and The X-Files‘ super-exciting return.