You know what they say: You can take the girl outta the country, but you can’t take the country outta the girl. And every country girl worth her salt loves a good fight. This week on Party Down South, Tiffany proves she’s about as country as they come… and, yep, that’s a compliment.

If this is Tiffany not mad…

Since last week ended with Tiff’s shout of “Daddy, take your drunk bitch to bed” ringing in my ears, I knew this week would start with some fireworks. And, boy, was I right. It started with a bang, ended with a bang and, well, there may have been some actual bangin’ somewhere in the middle, too.

Sensing that Tiff’s “not mad” attitude is about to turn physical, Daddy decides to throw Hott Dogg over his shoulder and take her to the, ahem, slaying station. How Cro-Magnon of him. As he flops her down on the bed, saying, “I’m about to spoon with ya, baby,” Tiff’s not mad words pierce the air: “Sleep in your own bed, you stupid c***. Bye, Felicia!”

You know, when she puts it like that… yeah, no, she’s definitely pissed.

Meanwhile, in Daddy’s bed, he’s decidedly un-pissed, because he thinks he’s about to bang Hott Dogg. Until — screeeeeeech! — Hott Dogg slams on the brakes. Daddy, it would seem, has a serious case of beer breath.

Walt, who has been listening right outside the door totally un-creeper like, rushes into his room to try and scrounge up some gum. “If I can’t hook up with Hott Dogg, I’m gonna make damn sure Daddy does.”

Of course, such loyalty’ll cost ya. In this case, Walt figured his wingman assistance earned him a ringside seat to the festivities. “I’m just gonna watch ’em get it on. What’s weird about that?” he says. “We’re all family here. We’re makin’ memories.”

Alas, all of their efforts are for naught. Hott Dogg insists Daddy’s breath is still stank, so there will be no banging that night. Oooh, tough luck, dude.

You may or may not be happy to learn Daddy tweaked his game accordingly.

“Daddy didn’t go out and buy any ‘minty squares’ (which is what he calls gum), but he definitely made sure to find some in the house and stash them by his bed just in case he had a chance to ‘mustard Hogg Dogg’s buns’ again,” explains SallyAnn Salsano, 495 Productions president and founder and creator/executive producer of Party Down South.

The next day, Mattie, Daddy and Lyle head to their first day on the job for Biloxi Beach Co. And dang, Mattie — our girl knows how to work! She essentially puts the boys to shame which, let’s face it, isn’t hard to do.

Back at the house, Walt and Murray contemplate the state of the pool. “At this point, I don’t know whether to clean it or take a dump in it.” In general, I’d say it’s a good call to avoid any situation in which the toss-up involves those two extremes. 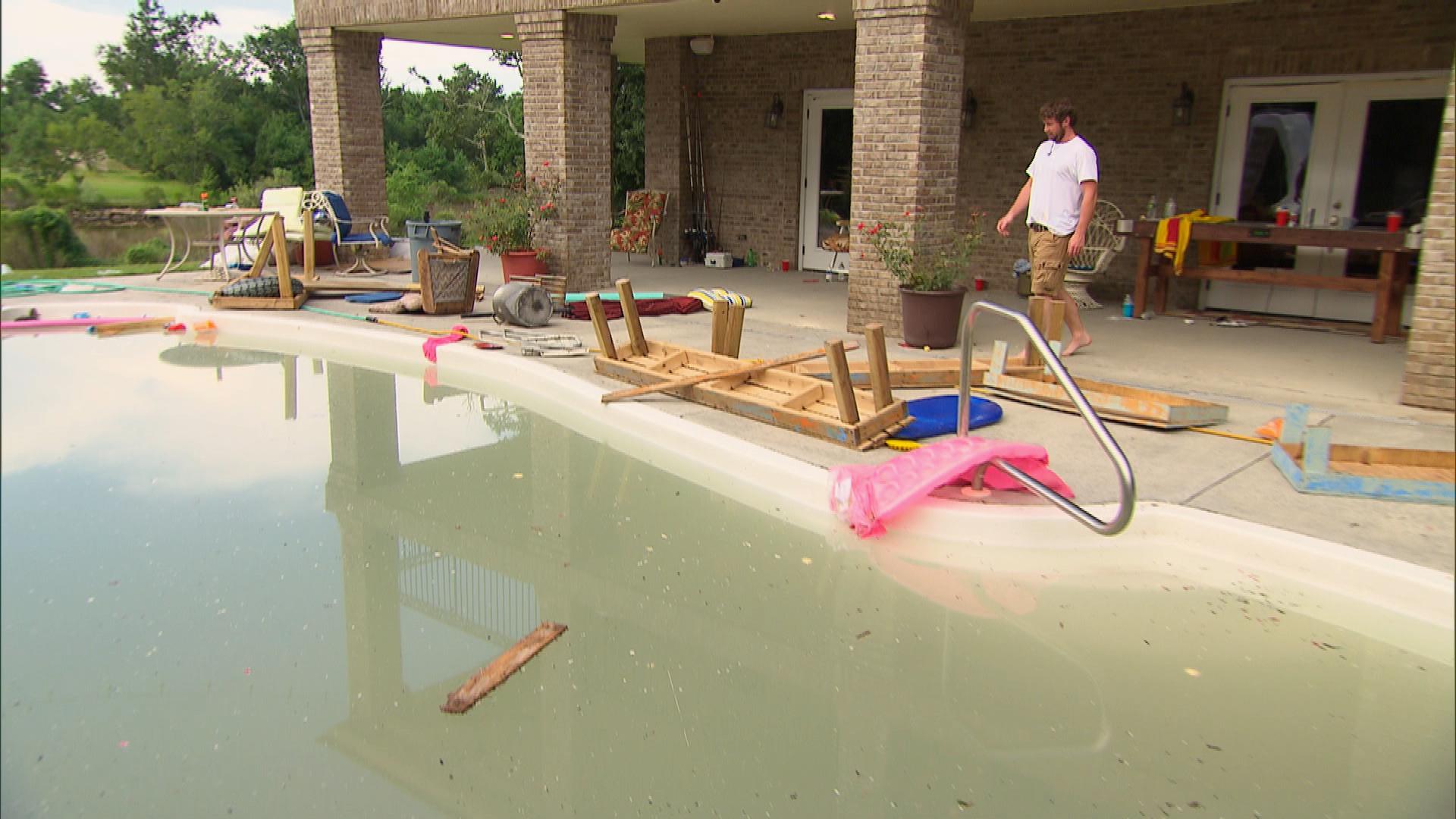 The fellas reckon the same thing, so they call in a pro. And, scout’s honor, it makes my week to watch the pool guy mutter, “Oh, my God,” repeatedly while scooping all manner of shit (literal and figurative) out of the water.

It really was that bad, confirms Salsano. “What didn’t the pool guy pull out of the pool?” she jokes. “There were rosebushes, broken pots, chair cushions, ping-pong paddles, broken furniture, mounds of dirt and cake… you name it, it was probably in that pool.”

The next day it is Walt, Hott Dogg and Murray’s turn to hit the beach for work. Or, in Hott Dogg’s case, watching everyone else work. Quote of the day? “Here’s the bucket… I’m gonna go play with the dog!”

Back at the house, Mattie — hoping to squelch the uprising — womans up and asks Tiff and Lauren for a powwow. (Hello, is she wearing a waist-shaper? Spill it, sistah! I want deets.)

Mattie realizes the other girls have been feeling abandoned by her and she agrees that she needs to let Hott Dogg fight her own battles. Unfortunately, none of them knew at the time they’d soon all be fighting a battle — of the gastrointestinal variety.

Not even Daddy can stomach it. “Chef Boyardee Hannah has put so much stuff in this spaghetti that it just sucks,” he admits. 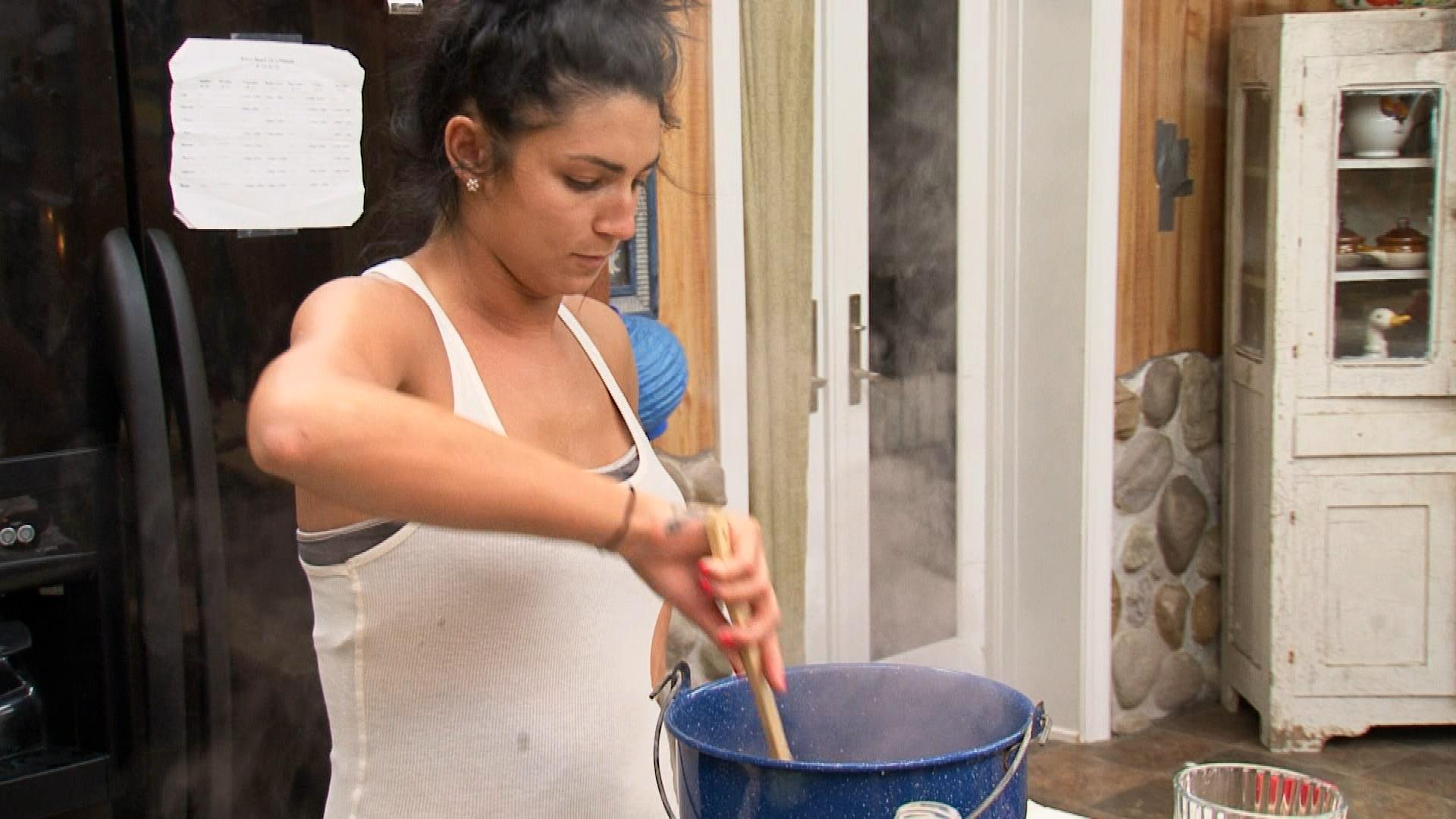 Lyle and Mattie flee the meal to go fishing. Is it just me or are these two getting awfully cozy again? It may be early, but I predict some sort of hookup this season between these former flames.

Mattie is predictably cute as a button when she gets super excited about kissing the crab and Lyle is predictably goofy when he turns it over and kisses it claw-side-up. Mattie tosses it back in the water after it pinches Lyle’s lip, but in my head he goes Dodgeball on its ass (crabs have asses, right?): “Nobody makes me bleed my own blood!”

Inside, Murray, Daddy, Hott Dogg, Walt and Lauren square off in a drunk spelling bee, which sounds like a pretty solid plan for Saturday night to me.

Nobody wants to lose to Daddy, but they all do — except for Hott Dogg. She wins it all, which is especially impressive since I’m fairly certain Tiff was feeding her the hard words (uh, masquerade? enamel?).

Just when Tiff starts to come around to Hott Dogg, the new girl goes and asks about the other thorn in Tiff’s side: former housemate, Lil Bit.

Tiff peaces out and Daddy gets so quiet you can hear a bong drop. “Daddy’s so quiet, I’m worried he’s still not over Lil Bit,” says Murray. “You can tell it crushes him.”

“I don’t think Hott Dogg asking about Lil Bit was a mistake. Lil Bit was definitely a touchy subject for the roommates and Hott Dogg was still getting used to everybody. It makes sense she would ask about her, but I don’t think she was ready for the chaos it caused!”

Later that night, the whole gang partakes of a time-honored Southern tradition: Gettin’ drunk around the fire pit. Tiff says she is going to bed because she doesn’t feel good, possibly from the amount of bullshit Daddy just fed them all about how alien people are to blame for the scarcity of gold.

As Tiff tries to sleep, super-wasted Daddy thinks it would be a fantastic idea to call his buddy, Chris, and mention Lil Bit. In the words of Julia Roberts in Pretty Woman, “Big mistake. Big. Huge!”

Things really start to heat up when Tiff backs Daddy up to the fire pit, reaming him out every step of the way. And, because reality TV, the screen goes dark just as she pushes him towards the flames.

Did Tiff just BBQ her sometimes bed buddy? If so, Salsano isn’t saying. “Any fight between the roommates changes the course of a season,” she hints. “I can’t tell you how this one affects the house, though. You’ll have to watch next week to find out what happens, so tune in, please!”

Salsano does reveal this much, however: It wasn’t all brawling this week.

“One of the funniest moments that didn’t make air was when Daddy actually kissed Murray at the fire pit to prove that Daddy loves people of all shapes and sizes. Another one that didn’t make it was when Hott Dogg started the prank war by putting toothpaste on Murray while he was sleeping,” she says. “It got all over his beard and Hott Dogg almost woke him up with her giggling.”

Poor Murray. Maybe next week my favorite lumbersexual will get some much-needed revenge. Hey-oh!