More: The Walking Dead — Carol’s unforgivable moments and why we let them slide

I had a sinking suspicion that Noah’s story wasn’t going to end well just as soon as he started talking about his future. It seems whenever a character begins to get a little bit of hope — bam! — they are done. 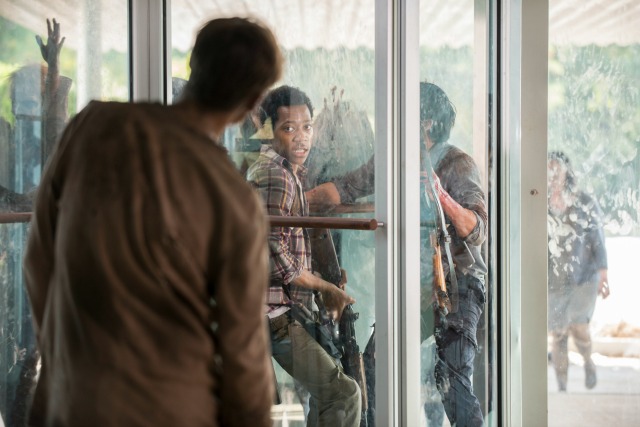 Sure enough, Noah met his demise near the end of the episode and it was probably one of the most horrific and terrifying deaths we’ve ever seen on this show. Thanks to the idiocy of one of Alexandria’s people, Noah was pulled out of the relative safety of the revolving door to be eaten alive by walkers. The worst part (actually, there were so many parts about it that were awful that this fact is just one of many “worst”) was that Glenn was forced to watch Noah die mere inches from his face. Noah was quite literally torn to shreds (those fingers going into his eyeball is an image that will haunt my nightmares forever) in front of Glenn, but not before telling him, “Don’t let go.”

Noah’s dying words might have at first seemed like a man begging for his life, but there was much more to it than that. Steven Yeun (Glenn) and Tyler James Williams (Noah) revealed as much during their appearance on Talking Dead after the episode. Noah wasn’t just asking to be saved, he was telling Glenn not to let go of his humanity. Knowing that Noah had been looking forward to beginning his life anew in Alexandria, that he had been planning to learn architecture so that he’d have something to contribute, that even in his final moments he tried to give a message of hope — all of it made his death even harder to bear. 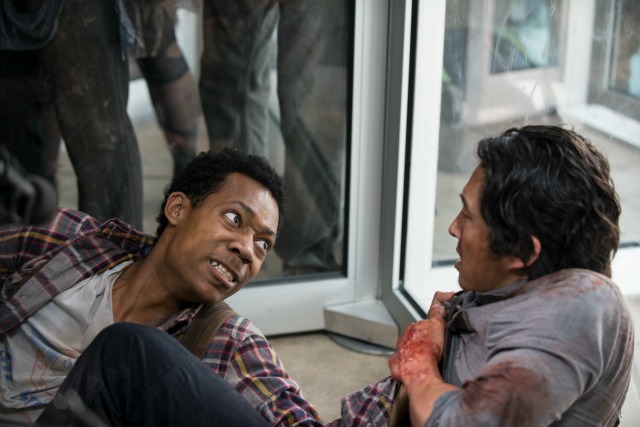 The Walking Dead has numbed my soul

Yet, no matter how brutal and gruesome Noah’s death was, no matter how terrible it was to see such a young life snuffed out, I found myself feeling some peculiar emotions during last night’s episode of The Walking Dead. Considering how it happened, I should have been a bawling mess by the final credits. Yet, oddly enough, I didn’t shed a single tear. Not one. Thinking that perhaps I was just in shock, I watched Talking Dead and waited for the tears to come. Usually when a character dies and the actor makes their appearance on Chris Hardwick’s couch, I lose it all over again. In fact, sometimes I cry even harder.

But still, no tears came. I don’t think it was because Noah is a fairly new character. Much like the people living in that post-apocalyptic world, I can get attached fast. When they meet someone new and accept them into their makeshift family, that’s it. Did Glenn cry any less because he hadn’t known Noah as long as he knew Rick? Of course not. That’s the same thing with me. Once Noah was included into the family unit, I cared for him as much as I did everyone else.

After a lot of reflection, I finally figured out why my heart had apparently gone cold. The fact of the matter is that there has just been way too much death on this series. This season especially has been hard on the main cast. I was nearly inconsolable when Beth and Tyreese died, but I simply had no tears left for poor Noah. 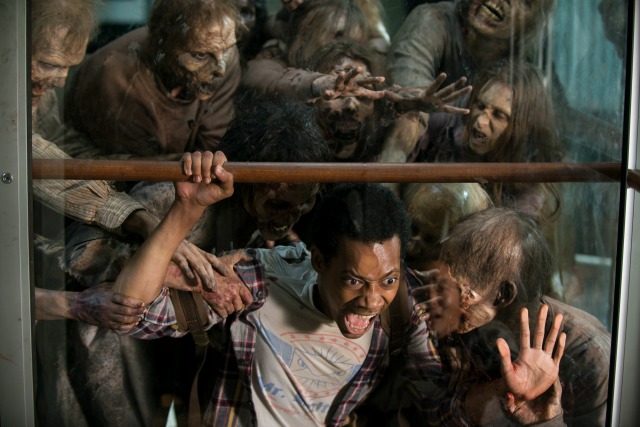 Is there too much death on The Walking Dead?

It makes me wonder if The Walking Dead is doing itself a disservice by killing off so many people this season. I’ve been with this show from the beginning and I understand death is a part of these people’s lives now. But the shock and grief that I used to feel with each death isn’t there anymore. It’s become such a part of the series that I fear I’m going to stop caring and that thought almost frightens me more than the idea of being snacked on by walkers.

More: The Walking Dead — for the love of God, Rick, please shave

If this is happening to me, it stands to reason that other fans could be feeling the same way, as well. If that’s the case, then I think the series might want to ease up on the nonstop killing of main characters. We all know it’s going to happen, but spreading them out a little bit would go a long way towards keeping us fans from growing numb by all the bloodshed.

What do you think of the latest death on The Walking Dead? Do you think the show is starting to take it a little too far?