If you think Lifetime’s new show, Born in the Wild,? is a crazy concept and it’s all staged and fake and the people are insane, well… you’re wrong.

There are a few things two of the show’s stars, Amy Hammond, and her husband, Jeff, want people to know right off the bat.

1. Yes, they did have their baby in the middle of nowhere.

3. And they would do it again in a heartbeat (except maybe on the beach next time).

Amy and Jeff were one of six families featured on the show in which women literally give birth, well, in the wild.

And, I have to admit, the cheesy trailers left me feeling like the show was nothing more than a gimmick. I mean, who were these hippies who wanted to give birth in a forest and allow someone to tape it? Were they doing it for the money? For fame? Then I met the Hammonds.

Sweet and steadfast in their faith, the Hammonds say the experience has been bittersweet, saying they enjoyed their “reality TV stardom” (when you have a camera crew following you into the gas station, it’s kind of hard not to feel like a Kardashian), but were shocked by some of the backlash they’ve gotten.

“It’s stressful thinking about what you want to show and, obviously, by the comments (online), there is a lot of negativity toward us, like we are dumb for doing what we do,” says Jeff.

Amy added, “I would hope that people would realize that this is not just for hippies. It’s educated, middle-class, upper-class families that are choosing to do this. We did a lot of research on this and it’s not something that we’ve taken lightly; we didn’t just wake up one day and say, ‘You know what, I’m just gonna pop one out in the woods.’ It’s something that we put a lot of thought into.”

The couple even started a Facebook page to help educate the public on their decision.

Turns out, the couple had already decided they wanted to have the baby outside before they’d ever heard of the show. And when Amy saw a casting call for it, it was a perfect fit.

More: Born on the Wild takes natural childbirth to the extreme

“I had wanted to have a baby outdoors for a while and I’m a pretty quiet birther, so I thought I could so easily be in my own backyard, but I wanted to take it one step further,” Amy said. 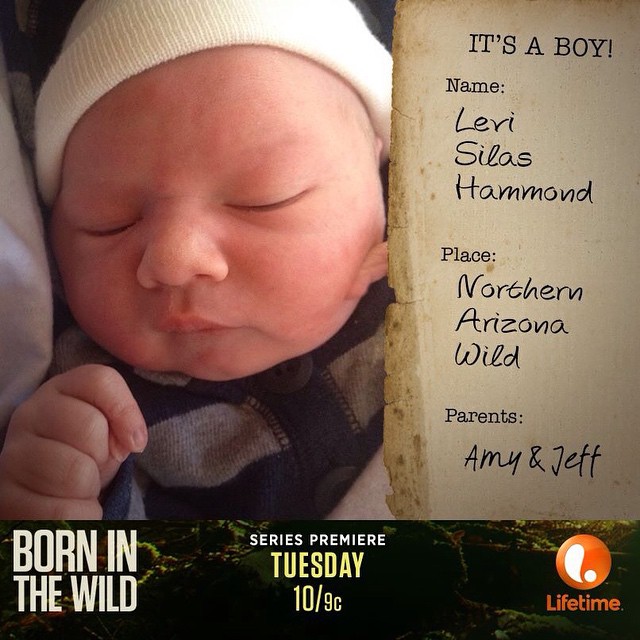 Of the couple’s nine children, only one was born in a hospital. So, for Amy, having a baby in the wild was a logical next step.

But her husband had just one stipulation — the midwife had to be there.

And although the TV audience will see much of the process condensed from about two hours to 20 minutes, Amy said the entire birth was relaxing.

“It was a very quick labor, very quiet. You can hear the elks bugling in the distance. It’s all very surreal.”

Born in the Wild airs Thursdays at 4 p.m. ET. Would you give birth in the wild? What do you think about the concept?