The Party Down South crew has settled into their new Mississippi digs and you know what that means: Now it’s time to christen this season with their first night of out-on-the-town drunken debauchery.

After taking a few shots from Daddy’s special bong (amazingly, that’s not quite as perverse as it sounds), new girl, Hott Dogg, is primed and ready for her inaugural barhopping experience with her PDS housemates. 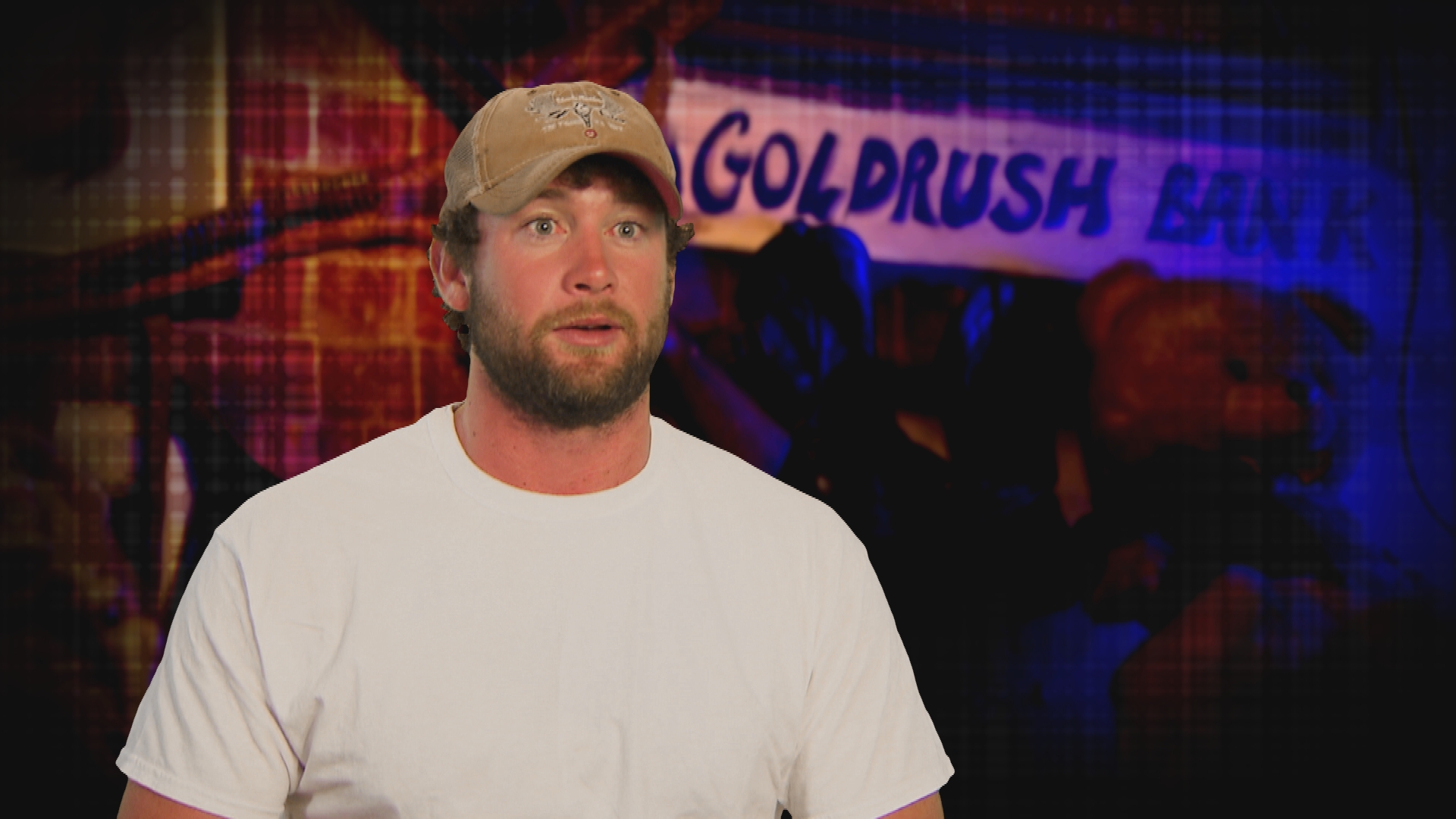 Walt, who spent much of last week’s episode gawking at Hott Dogg, feels confident that if anyone has the game to bang the new girl, it’s him. Fast-forward to five minutes later in the cab as he grimaces in pain and says, “God, I gotta shit so bad right now,” and, shortly after, “I just shit my pants.”

As always, Murray — the big, hairy Yoda of the gang — sums the situation up perfectly: “What? What?!” Like, seriously, Walt. What?!!

Tiffany and Lauren think Walt’s cab shart is the funniest thing ever, particularly when it affords them the opportunity to watch him run into the bar bathroom squeezing his butt cheeks together. 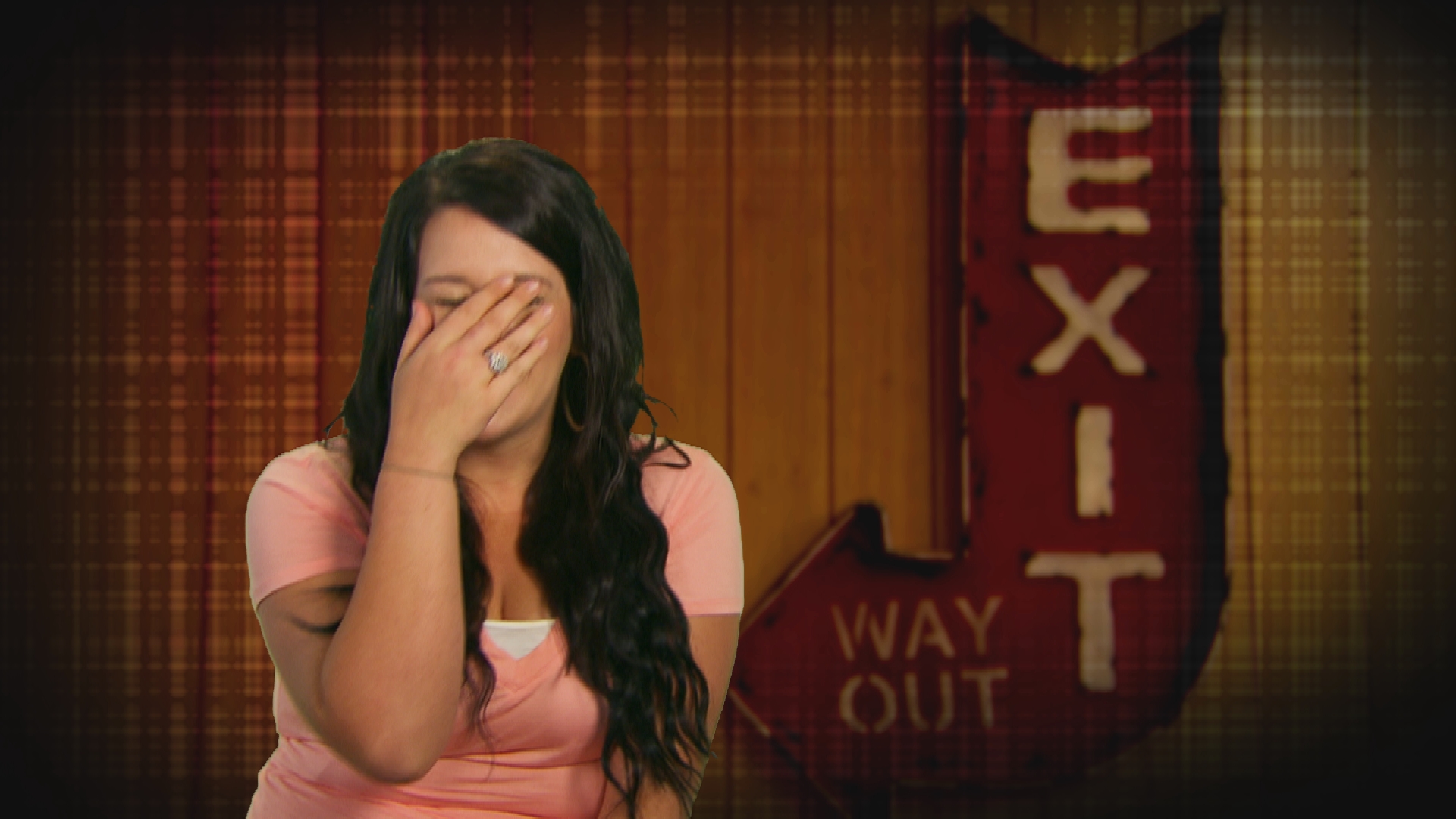 Amazingly, and I’m not sure if this is a testament to his fortitude or a serious question of hygiene, Walt emerges from the bathroom once again ready to put the moves on Hott Dogg. “A little bit of brown stain is not going to stop me from getting in there,” he says.

He makes his way towards Hott Dogg, who isn’t sure if she is digging him or Daddy more. She likes how manly Walt is, which I’m pretty sure she doesn’t realize includes actually rockin’ a skid while hitting on her.

There’s something about Daddy, though, she says. She references his tan and my suspicions are confirmed — Hott Dogg is a Jersey Shore soul trapped in a Southern girl’s body.

Tiffany muses that she thinks Hott Dogg is trying entirely too hard and I’m not sure about that, but I sure like the way Tiff chews on the word “entirely.” It’s cute, y’all.

The rest of the bar visit passes in a blur of Daddy arm wrestling, Lyle doing body shots and the girls shaking it on the dance floor.

Walt breaks out some dance moves to try to woo Hott Dogg, although he isn’t impressed with her dancing skills. “Honey, you could definitely use a lesson or two.” Sayeth the dude who shat his pants.

Daddy doesn’t mind that Walt is moving in on Hott Dogg, because he likes to toss his hot dog at Tiffany, if you catch my drift. Wink, wink. 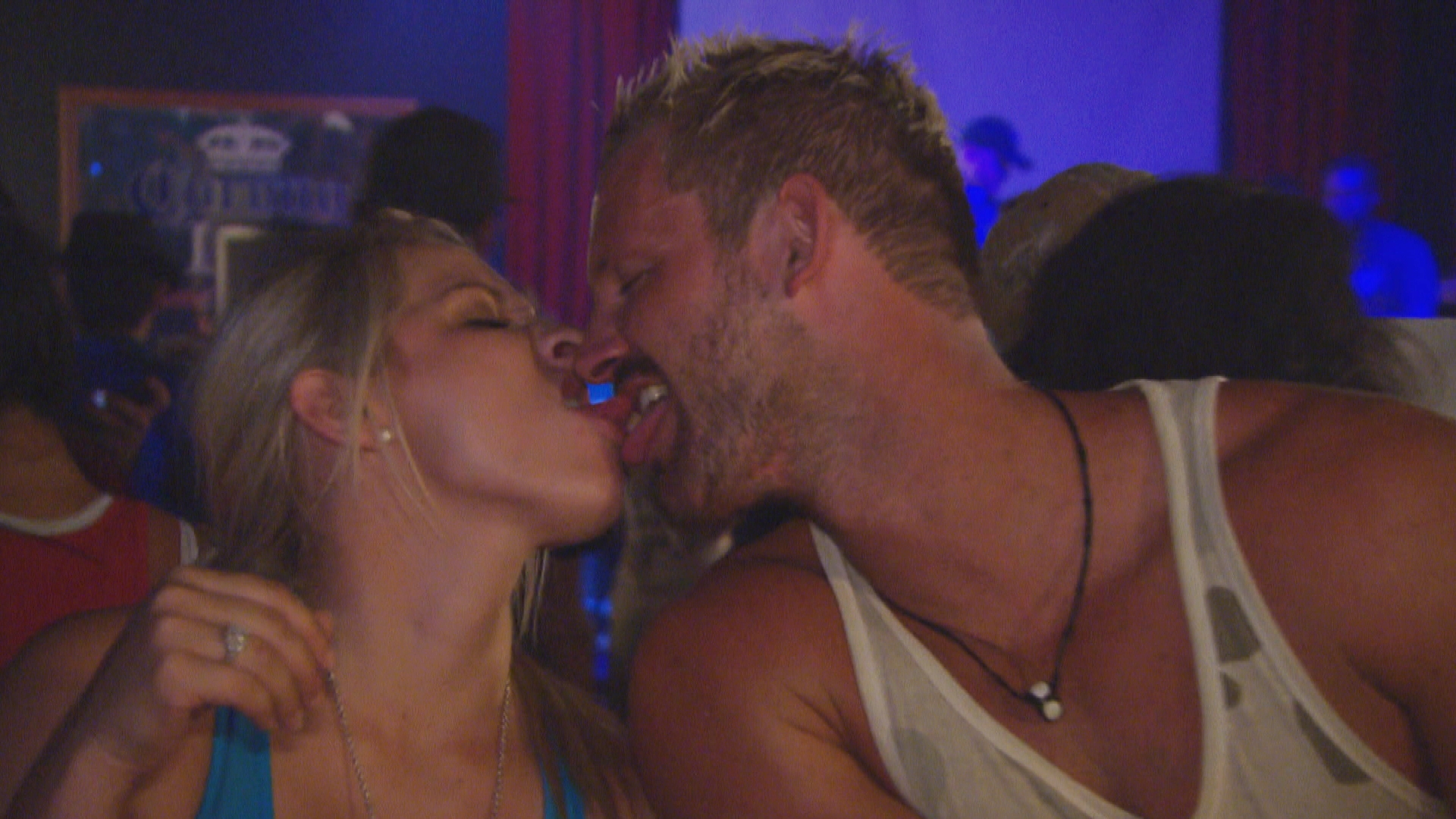 After Tiff manages to drag Mattie from the bar, the entire crew piles into their cabs and heads back to the house. But, you know, plus vomit. Lots of vomit.

Hott Dogg, who is not impressed, astutely notes, “They’re wasted on a whole ‘nother level.” 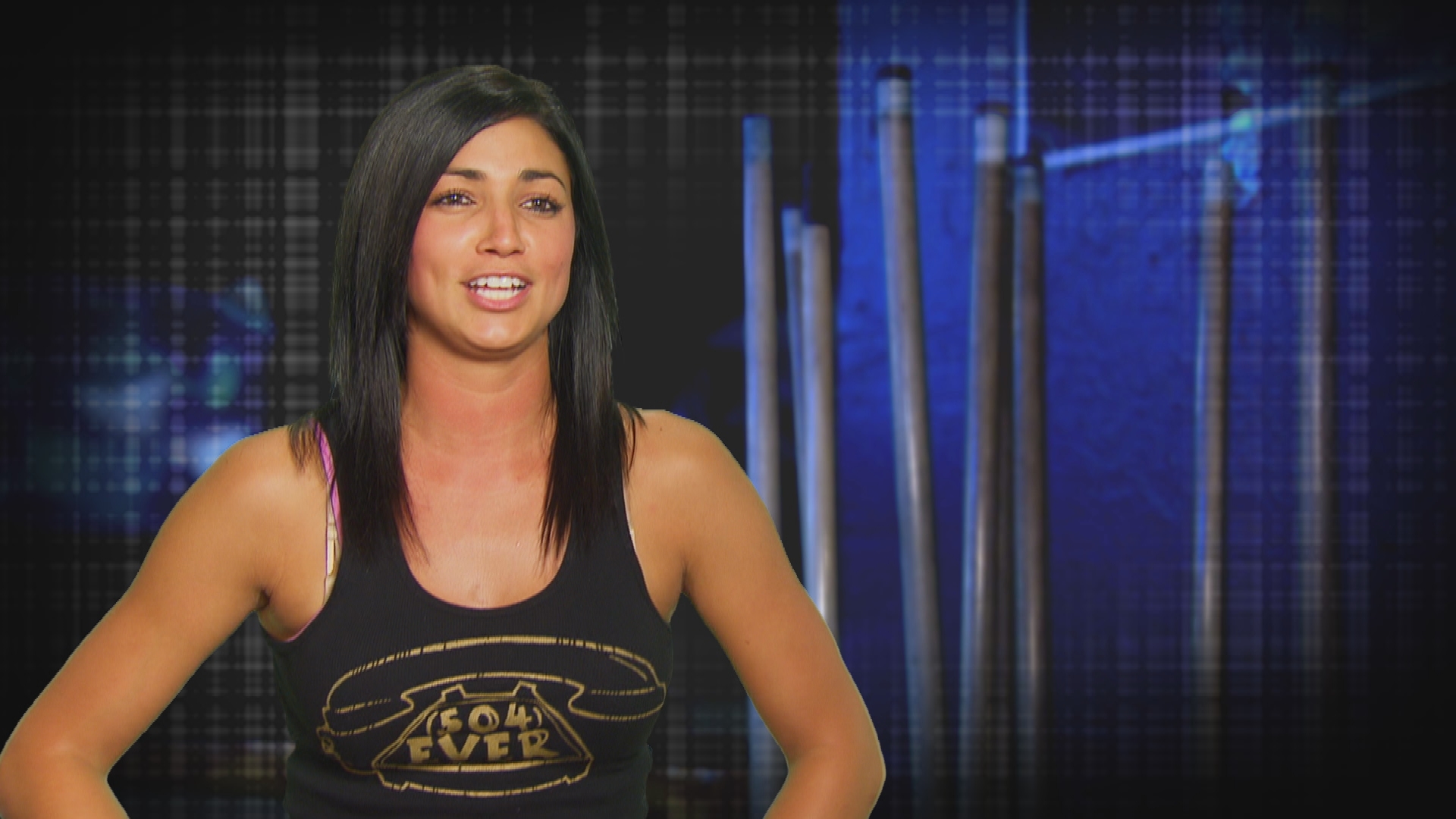 Lauren tucks Tiff in, Mattie passes out on the floor and Lyle passes out in a watermelon. Like, for real. All up in it. “I was raised in the South — I never waste food,” he says, and ain’t that the truth. No doubt, his parents are proud in this moment. 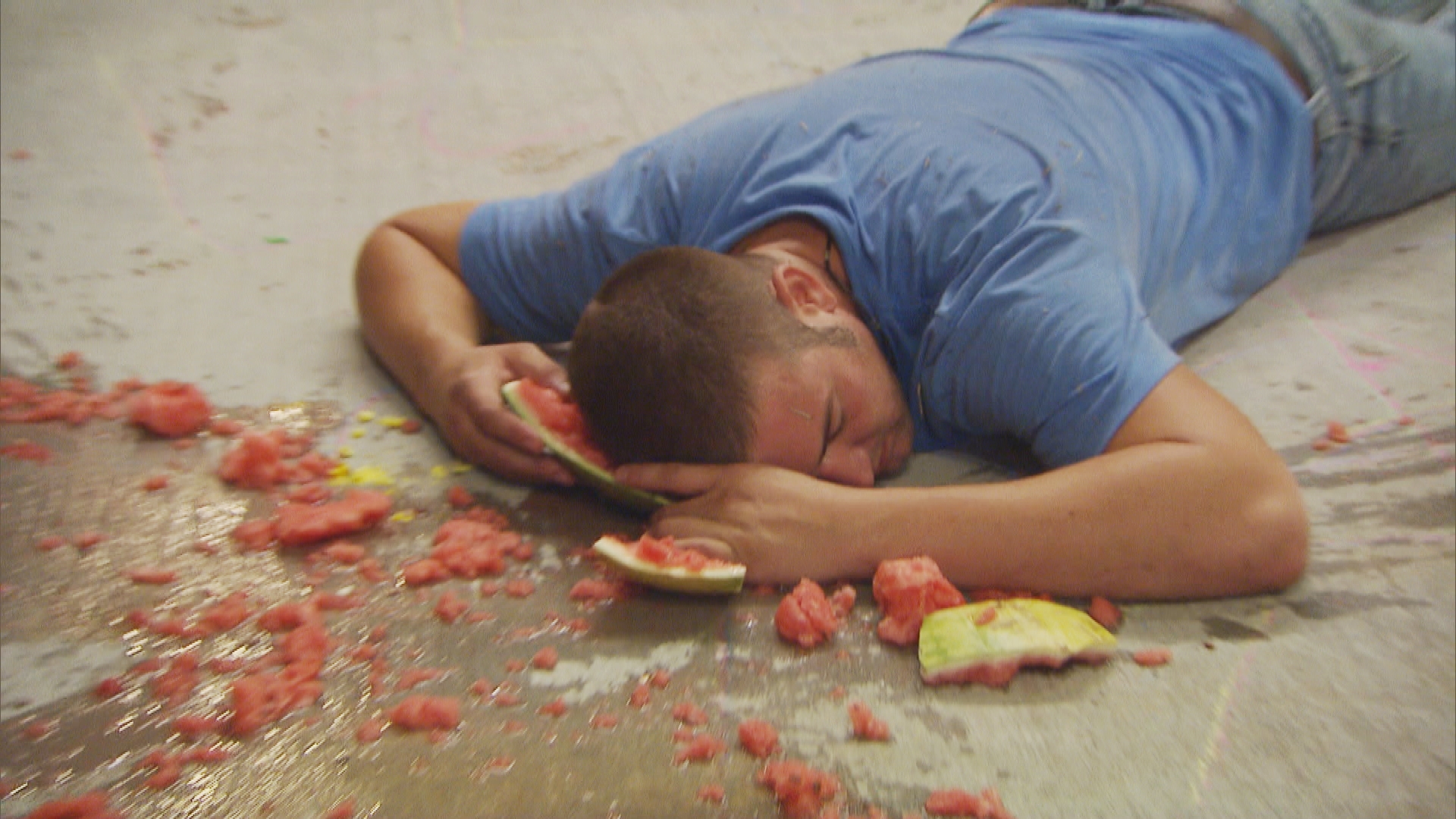 Daddy crawls in bed with Tiff and tries to “baby girl” her into having sex with him, but she is too drunk and too tired for that nonsense. 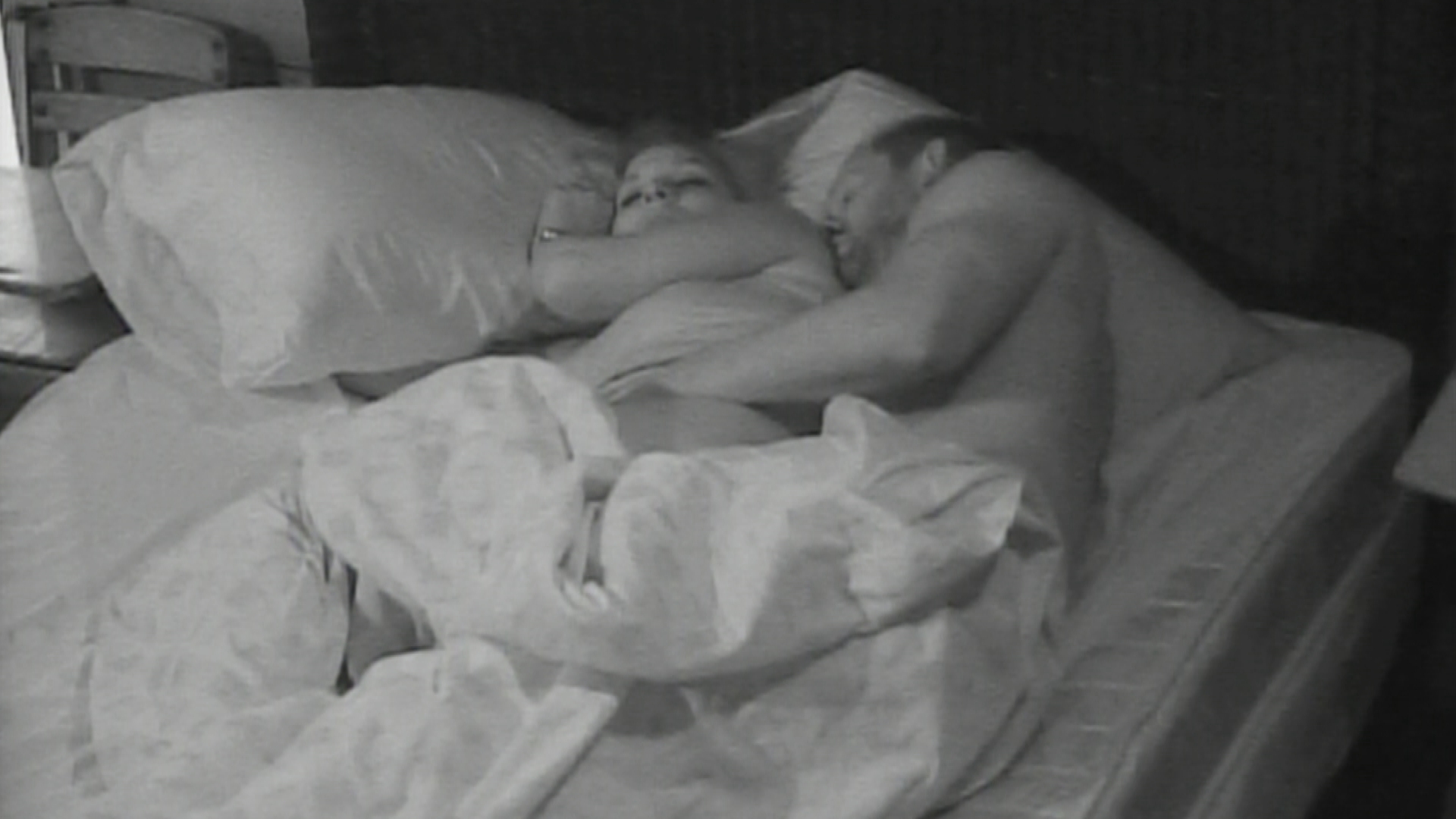 According to SallyAnn Salsano, 495 Productions president and founder and creator/executive producer of Party Down South, it’s tough to pinpoint which housemate was, in fact, the most inebriated that night.

“You know, it’s hard to say,” she told us. “It depends on the hour. Lyle… or was it Daddy? Then, Mattie and Walt. Less drunk (and in no particular order) were Tiffany, Hott Dogg, Murray and Lauren.” 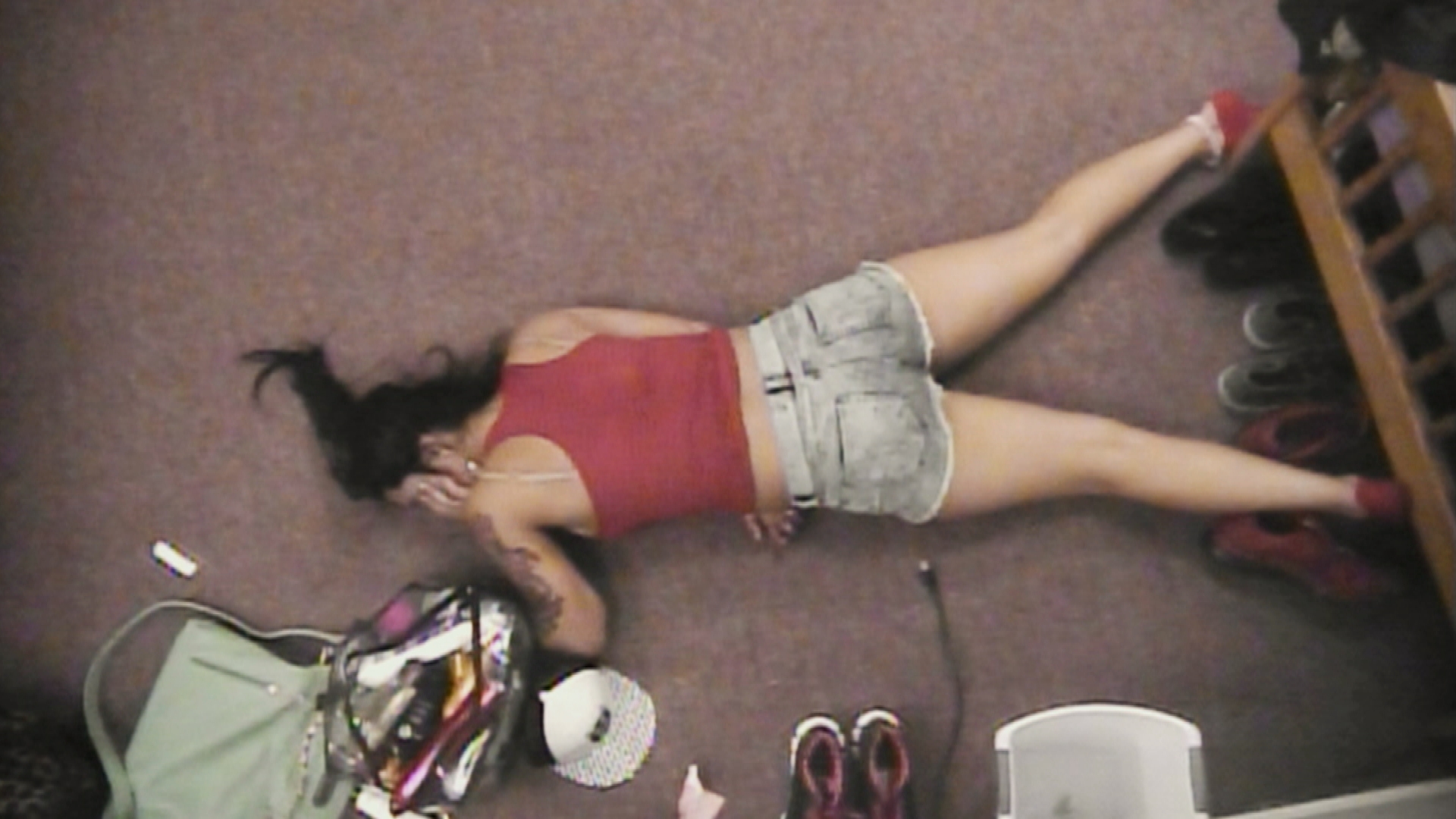 The next morning, the crew makes the most of the rainy weather by taking a redneck bath in the pool. Hott Dogg lathers her ass with soap in the rain and even Murray is ready to “chew on” her booty.

Later, they head out to the mud races, but that adventure is cut short by some seriously awry weather.

“The mudding event was cut short because there was torrential, biblical-proportion-type rain,” explains Salsano. “The production ruined a lot of valuable equipment trying to keep up with the cast in the rain.” 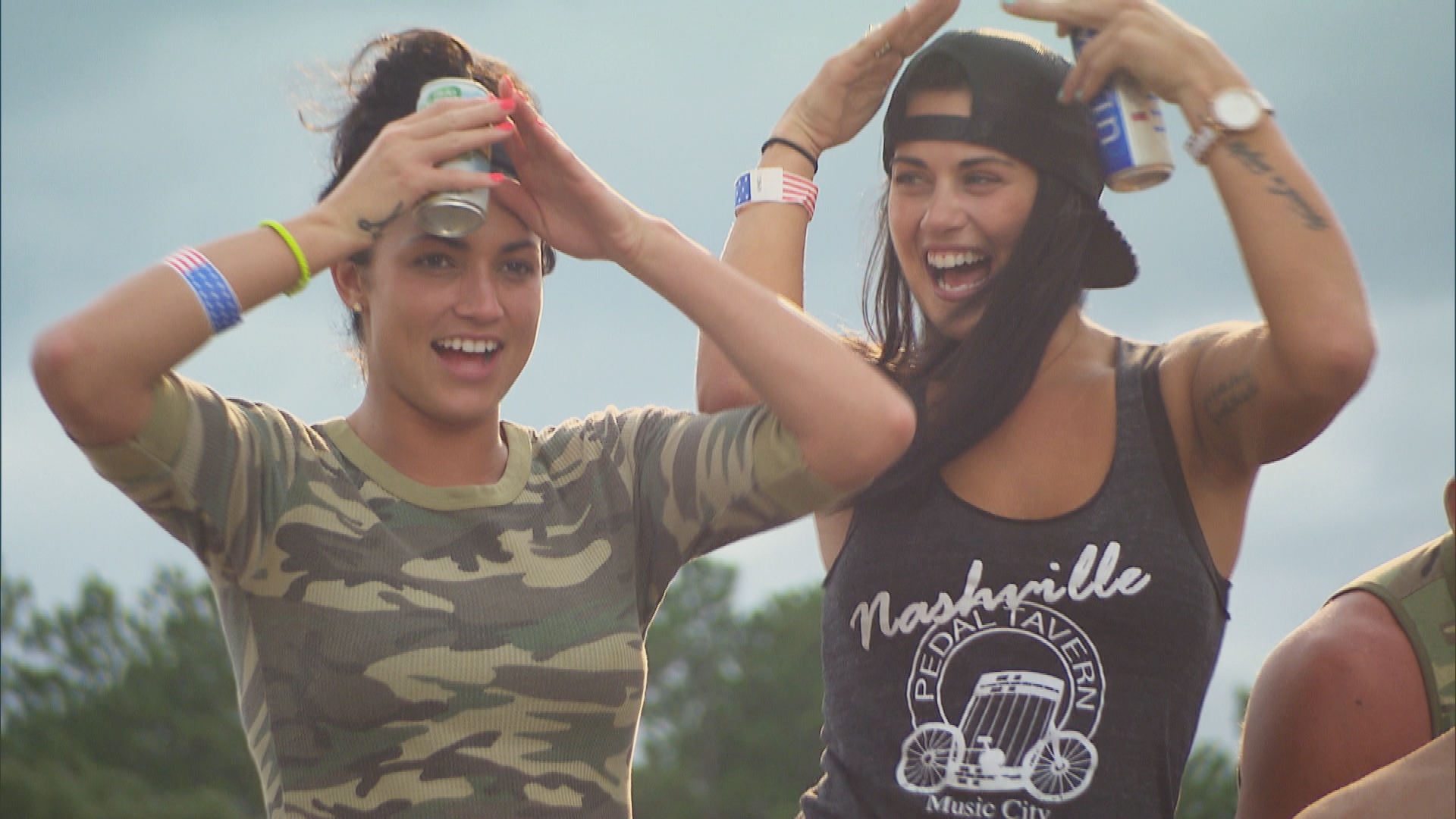 On the way back, Walt strips down in the car to dry out and Tiff reveals some pretty pertinent info: “I’m not really fond of Walt’s penis. It could be bigger. So could Murray’s.” Notice she failed to mention the size of Daddy’s goods? 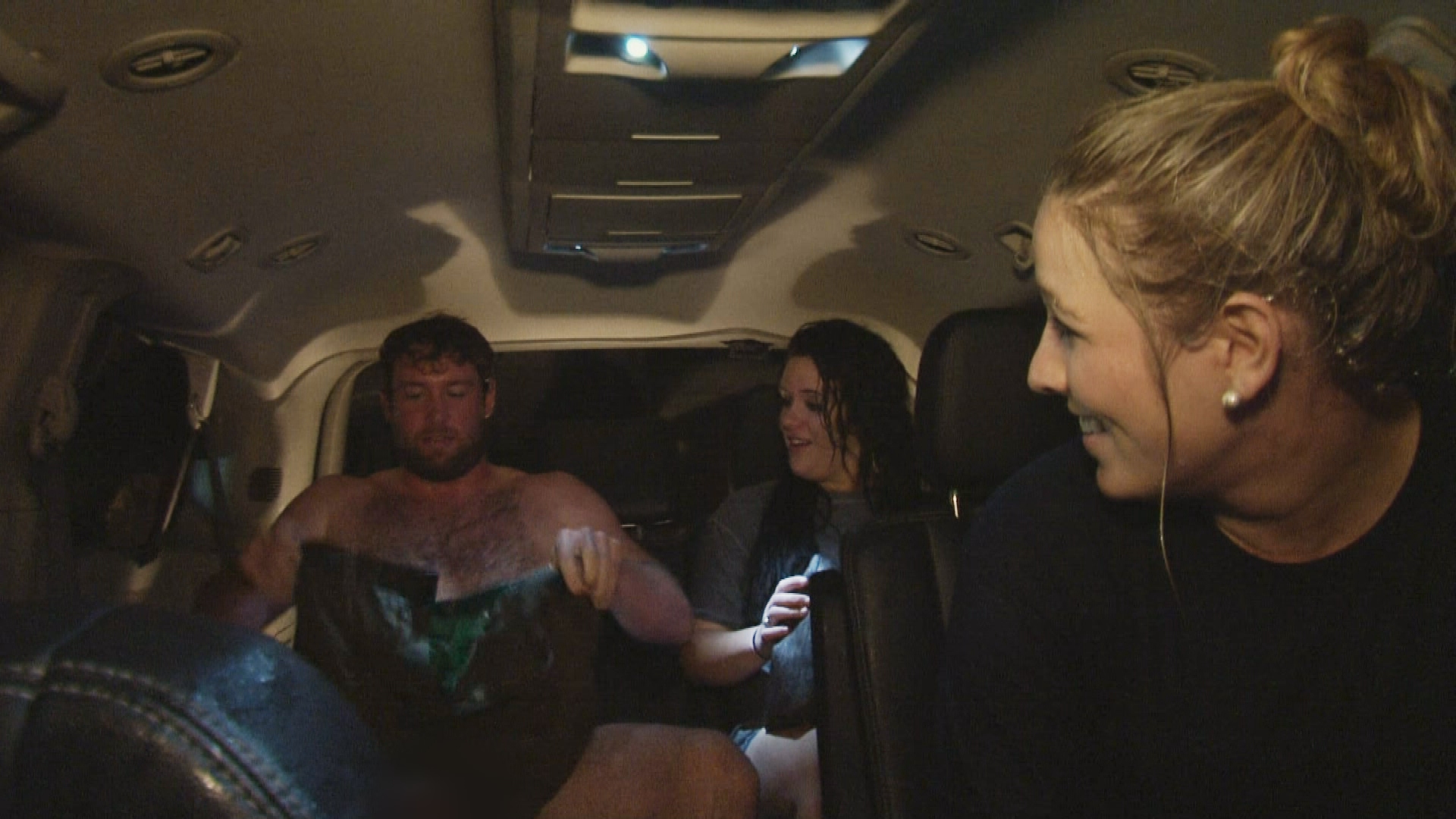 The highlight of the episode, though, proves to be when Daddy decides to get down on one knee and propose to Tiff… with Murray’s penis ring. Yep, you read that right. 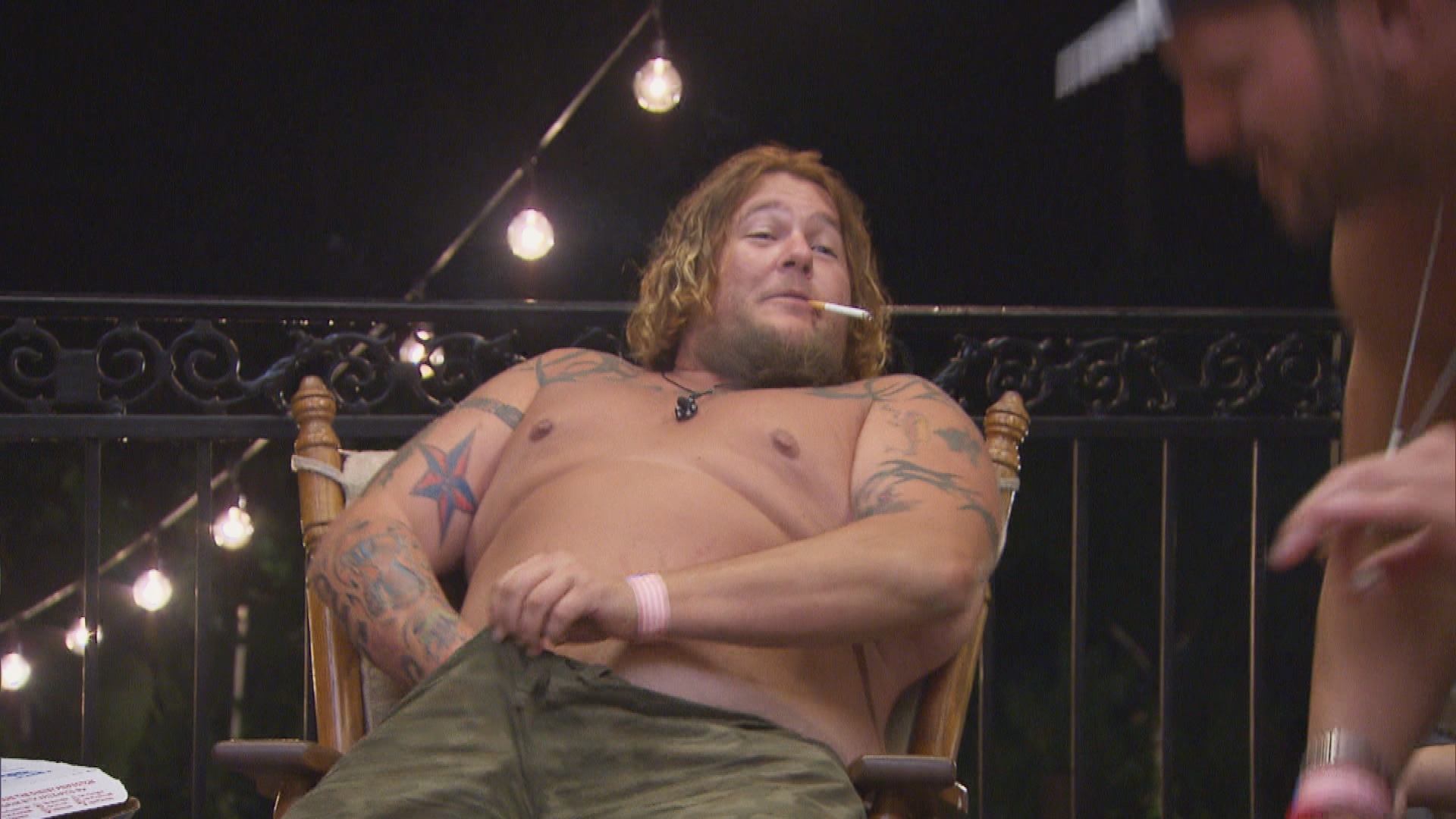 When she refuses to place the penis ring on her finger, Daddy decides to mourn by trying to bang Lauren and by tossing anything that isn’t bolted down over the balcony into the pool.

Don’t worry, though — he wasn’t too heartbroken and he likely has yet to call it quits on his quest to bed Tiff, either. 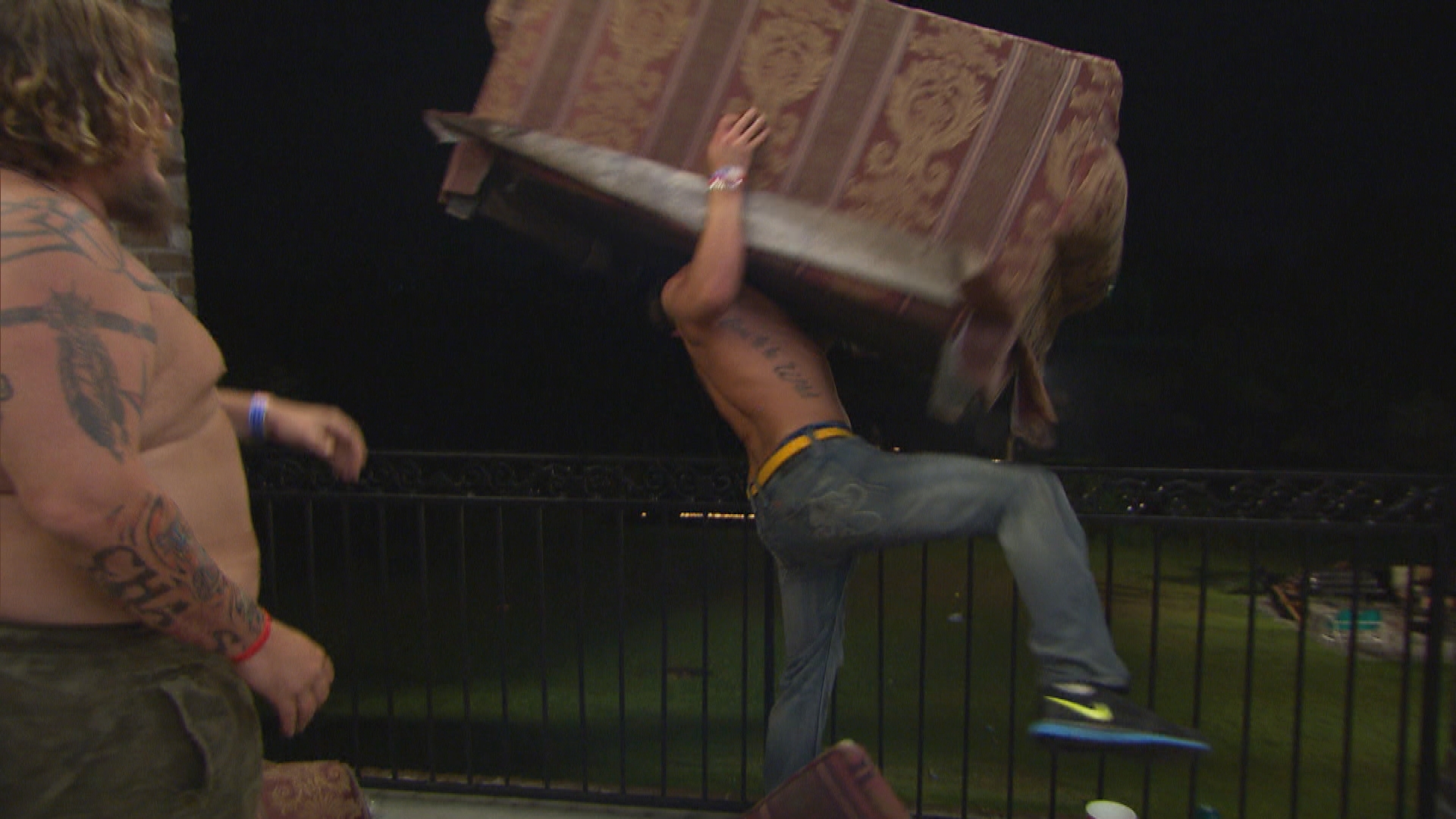 Says Salsano, “Daddy was not legitimately hurt by Tiffany’s rejection of his proposal. He would cuddle/bang/marry/pretzel most any girl! That being said, I think he thinks Tiffany is pretty special… she’s up there to be Mrs. Daddy.”

Lo and behold, though, his penis ring proposal wasn’t the most shocking stunt Daddy pulled that night.

“After Daddy threw all the furniture into the pool, he and Murray went swimming among the debris,” reveals Salsano, sharing that Daddy also “accidentally” peed in the ladies’ room at the club that night, joking, “At least he used the plumbing!”

But that’s not all. Brace yourselves, people.

“After Tiffany said no to Daddy’s proposal with Murray’s man jewelry,” says Salsano, “Daddy ‘turned it up to eleven’ by popping the genital jewelry into his mouth.” 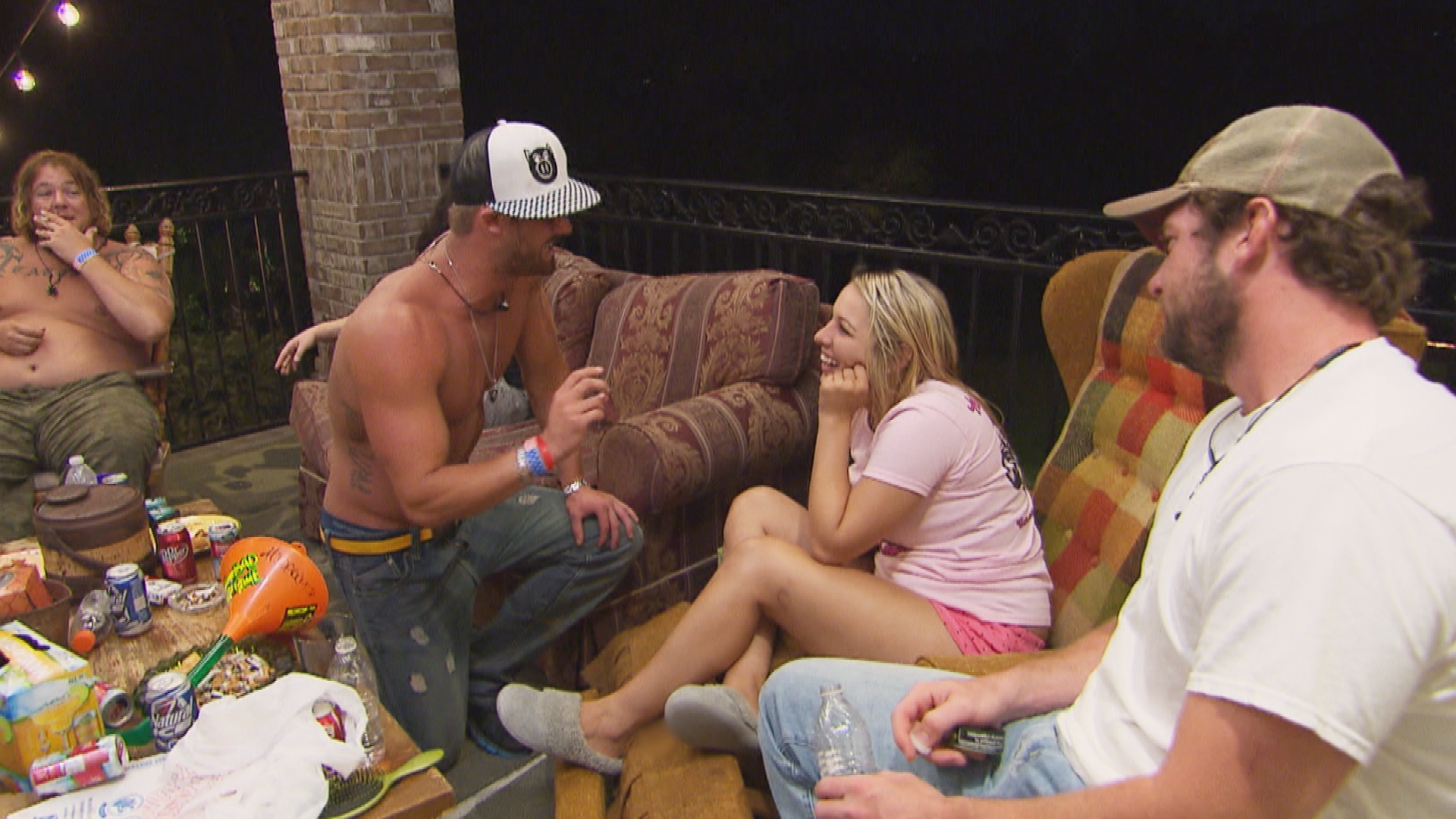 Party Down South: An insider spills, is Lil Bit gone for good?
Who should win Celebrity Big Brother 2015?
The ladies of The Jump are leaving the men in the shade