Nickelodeon execs, show producers and parents may not have realized it when Clarissa Explains It All first premiered in 1991, but the world of little girls everywhere was about to be turned on its head.

Sure, you can look back over time and find examples of rebellious girls and tomboys on TV. Punky Brewster wore a belt across her forehead, for goodness’ sake. However, that fashion seemed more like a spectacle and less like something illimitable. By the time Clarissa came along, though, we were older, wiser and itching for something new to latch onto. Tired of matching our shorts with our shirts, of playing with horse figurines and Barbies and downright nauseous from all the rose prints in our bedrooms, Clarissa gave young girls hope of a life, wardrobe and bedroom that fit our insides, whether our parents liked it or not.

More: Clarissa was only the tip of the iceberg for Nickelodeon’s diversity drive

In the early ’90s, preteens were surviving on pretty denim skirts, Kelly Kapowski-inspired tiny prints and so, so many matching bottoms and tank tops from the likes of Limited Too. Seriously, did anyone else have that hideous bold yellow-and-white striped shorts/T-shirt combo?

Clarissa entered and with her came a new sense of style. Clarissa (played by Melissa Joan Hart) didn’t dress like a little girl — she often dressed like she belonged at a concert for a grungy garage band. On any given day, there wasn’t much difference between the holey jeans she rocked and the ones pulled up high on her best friend, Sam. Her clothes were looser, more androgynous and 10 times more fun than anything we were wearing. And we wanted to cop the look.

Clarissa’s relationships also redefined how girls were seen on television. She was hardly Daddy’s little girl or Mother’s helper. She (mostly) got along with her parents, but only because they treated her like an equal instead of a princess. And, after decades of watching sisters being picked on by brothers, we finally saw a reversal in the brother-sister dynamic. Clarissa and Ferguson butted heads a lot, and while Ferguson may have sometimes seemed smarter, he was often easily outwitted by his big sis. And then, of course, there was Clarissa’s relationship with Sam. While it often seemed like Sam may have liked Clarissa, she never played the swooning girl. At worst, they were equals. At best, Clarissa seemed smarter and cooler than Sam.

Clarissa’s bedroom was insane, but it truly defined what parents had to see as a “new” type of girl. Yes, the familiar family quilt was on the bed. Yes, one wall had pink-flowered wallpaper. No, Clarissa did not let that define her. In a moment of sheer genius, set designers painted black checks over the wallpaper, to show Clarissa rebelling against her girly past. Hinting at truly inspired and cool hobbies, the pretty dollhouse was loaded with video equipment — something you’d never expect to find in a girl’s room. And, on another wall hung hubcaps and license plates. Whether Clarissa was a car aficionado or just liked the look/travel inspiration didn’t actually matter. All that mattered was that it went against the grain of what people expected from a teenage girl.

One silly little thing that always rocked our world was Clarissa’s pet. It’s a stereotype as tired as the rest that says boys are supposed to like rodents and reptiles and girls are meant to like kittens and horses. (Dogs go both ways). The creator turned that cliché on its ear by saddling Clarissa with a mini alligator-like creature named Elvis. 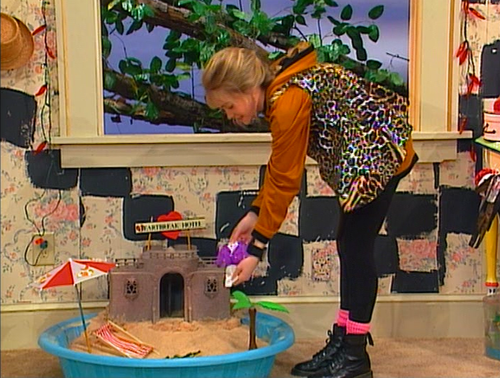 Whether the showrunners meant to or not, when they created Clarissa, they created a new sense of freedom from gender stereotypes for girls across the globe. We’re still in love with this all-time classic.

More: Sign up for our newsletter and this stuff will magically appear in your inbox