There is just something undeniably endearing about Annie, and even though we love the new version, we were thrilled to discover that the new Annie didn’t leave the classic version completely in the dust.

Although director, Will Gluck, made quite a few updates to the classic story line in his 2014 adaptation, there is still plenty of nostalgia on display.

Fans of the 1982 Annie will flip their red curly wigs over these five creative nods the 2014 film gives to its predecessor.

More: 10 Parents tell us why they love the new Annie

Awww, just look at that adorable red-headed Taylor Richardson in the opening of the film! She’s not just any cutie-pie, Richardson is the child star who plays Annie on Broadway! What a great way to start us off on our Annie Easter egg hunt. 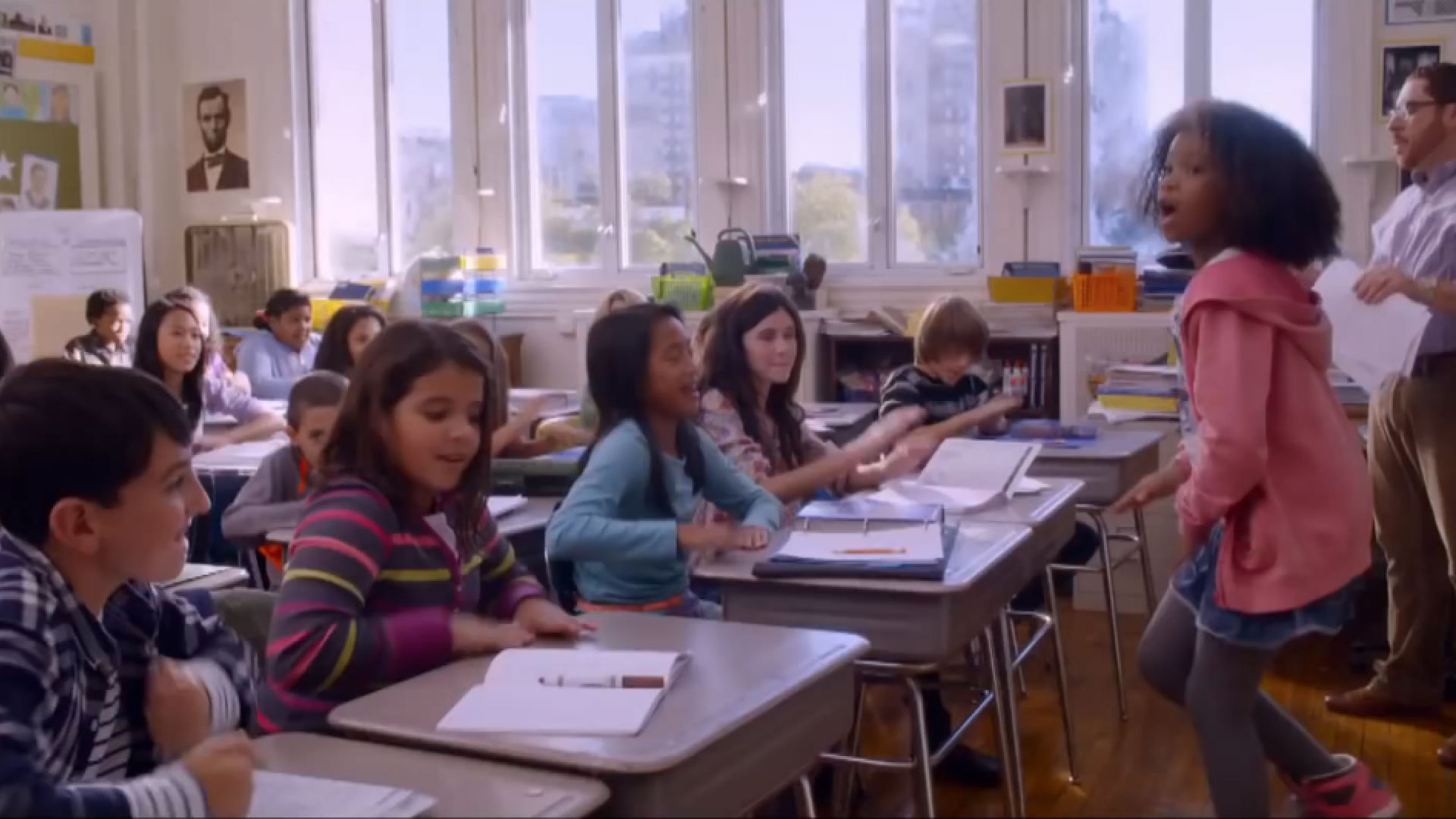 While the original movie has Annie meeting FDR and sharing the magic of “Tomorrow” with him and his cabinet staff, putting the 32nd president of the United States in the 2014 film would have been really weird. Not to worry, though, because Gluck made sure to give a nod to FDR in his version — Annie delivers a presentation on the president to her classmates at the start of the film.

More: Jamie Foxx teaches us how to say Quvenzhané’s name once and for all (VIDEO)

If you look closely at the board in Annie’s classroom, you’ll see the names of the original Annie writers — Charles Strouse, Martin Charnin and Thomas Meehan — mixed in with the names of the presidents that the children are studying. Sneaky, sneaky, Mr. Gluck!

Every child who saw the original film remembers Annie’s locket, but 2014 Annie has more than just a heart-shaped necklace to remember her parents by. Every Friday night, Annie goes to a restaurant called Domani’s in the hopes that her parents will return and claim her. The restaurant’s name, Domani’s, means “tomorrow,” which is just heartbreaking, really.

5. Punjab in the background

Fans of the original may be disappointed to find that Daddy Warbucks’ personal assistant, Punjab, has been written out of the 2014 version. (And understandably so — the character was more caricature than anything and a problematic one at that.) But Gluck knows we might still have a soft spot in our hearts for the man, so at about 28 minutes into the film, you get to see a building in the background called “Punjab Harlem Building Supply.”

While you’re staring at Punjab’s supply store, though, keep your eyes peeled for the van that almost hits Annie. It has another hidden reference on it, so be ready with the pause button, because that van is quick! 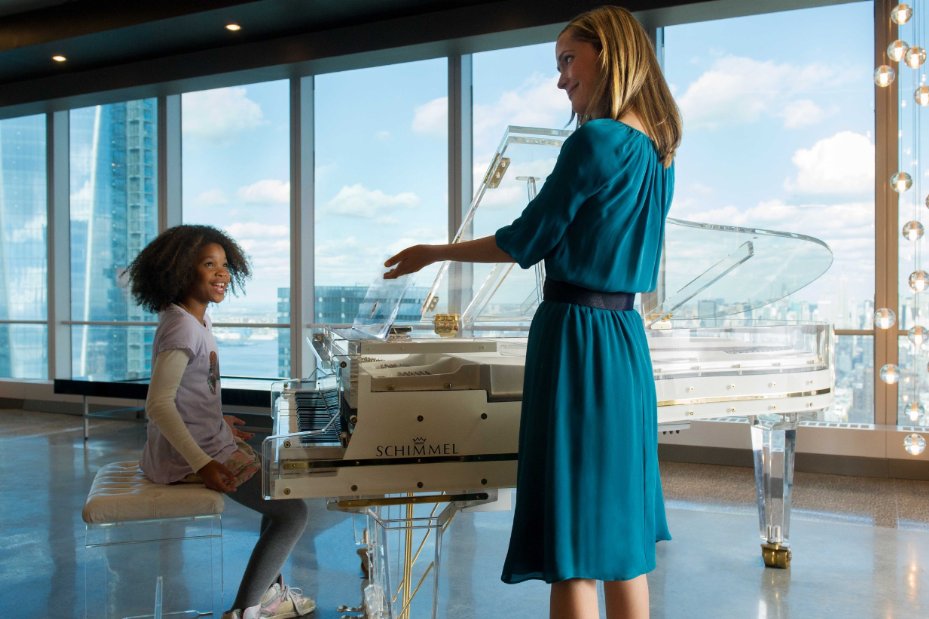 In the original Annie, Annie is received by a host of servants in Warbucks’ palatial home. Grace introduces Annie to the staff and they all sing a rousing rendition of “I Think I’m Gonna Like it Here.” In the new version, Annie asks Stacks if he has a cook or a million servants and gets quite the answer, because Will Stacks doesn’t have servants, he has an automated penthouse, which makes the updated spin on this musical number a very clever one. Instead of singing with maids and butlers and such, Annie and Grace sing the number in praise of the penthouse’s computerized comforts.

Will Stacks is running for mayor and he has image problems. Rescuing Annie puts him on the social media map in a positive way, giving him traction against his mayoral opponent, Harold Gray. But Harold Grey isn’t just some arbitrary name the screenwriters pulled out of a hat. Harold Gray is the name of the author of the Little Orphan Annie cartoon. 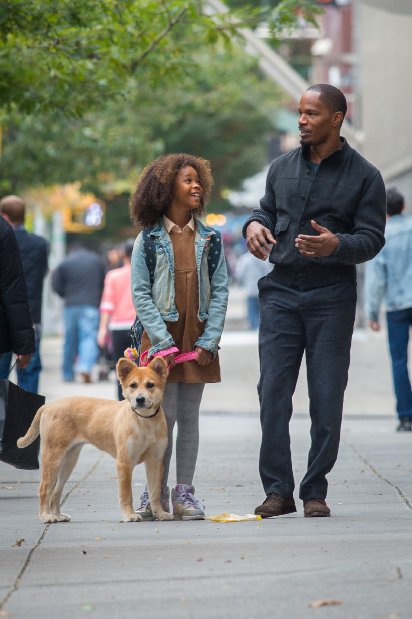 Gluck personally asked that the 2014 Sandy look nothing like the dog’s previous incarnations. The dog’s trainer, Bill Berloni — who has trained four generations of Sandys — found and cast a shelter dog whom he then named Marty after Martin Charnin, one of the original writers.

While 2014 Annie is a foster child (and Miss Hannigan a greedy foster-check-hoarding alcoholic), Bobby Cannavale gets to throw a shout-out to the original 1924 stage play with his line, “There she is, our own Little Orphan Annie.” Awwww… if only Cannavale didn’t turn out to be such a jerk later on.

Baldness and Daddy Warbucks go hand in hand — so much so that productions across the country are, no doubt, key contributors to keeping bald cap-makers in the green. However, Jamie Foxx, with his handsome head of finely styled hair, seems to eschew the tradition until Annie catches a peek at Stacks in the bathroom without his wig. We get even more giggles when Grace talks about admiring Stacks’ hair and Annie tells her not to rely too heavily on that feature. 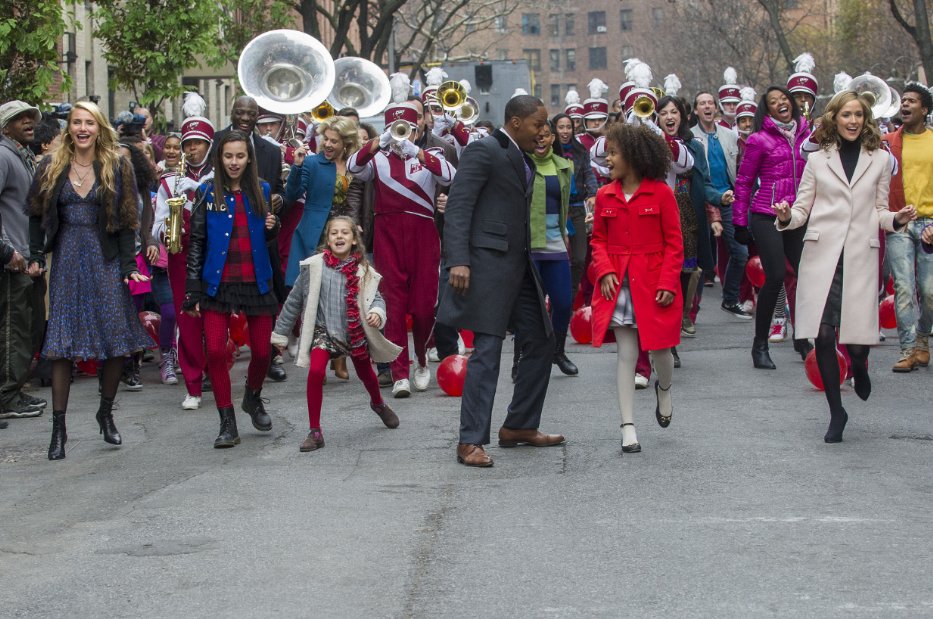 Oliver Warbucks made his money off the war, hence his oh-so-punny last name. Not one to be outdone, Gluck updated his reluctant billionaire-turned-father into a cell phone mogul and named him Will Stacks, which is a totally pun-tastic spin on the tradition. William can be shortened to Bill, you see, which means his nickname would be Bill Stacks, which makes sense since this elite businessman has stacks (and stacks) of dollar bills. 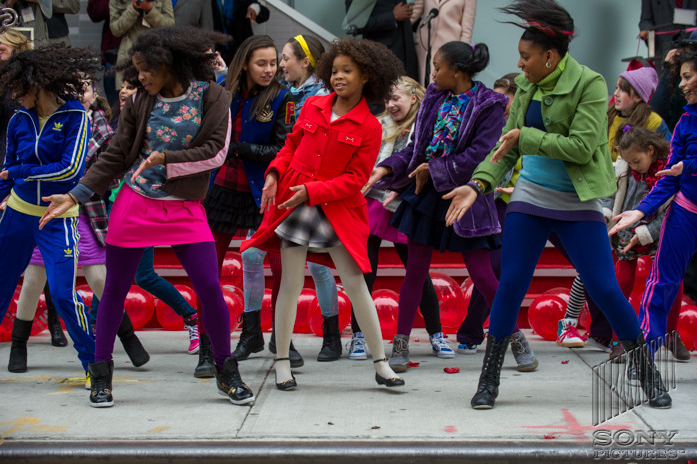 At the end of the 1982 Annie, Daddy Warbucks and Annie dance around a lavish carnival-esque party while singing that they don’t need anything but each other to be happy. It’s a heck of a party and one that any kid would be thrilled to get invited to. While the 2014 version ends with Stacks and Annie singing on a pier, the film does give a nod to the 1982 film in an earlier fantasy sequence scored by Sia’s version of “You’re Never Fully Dressed Without a Smile.”

More: Sia just made an Annie tune we all grew to hate way cooler (VIDEO)

This post was brought to you by Annie Movie.