Someone get rehab on line two, because Hollywood’s remake addiction is officially out of control. Now and Then director Lesli Linka Glatter recently told Vulture that a remake isn’t off the table. In fact, she’s discussed it with Marlene King, the film’s writer.

As a huge Now and Then fan who learned how to stuff her bra from Teeny, I’m horrified by this news. So horrified that I can only hope Dear Johnny haunts anyone who dares to get involved in the production of this movie.

First of all, the movie is only 20 years old. It came out in theaters in 1995. Second of all, it takes place in 1970. So it’s not like it’s dated. It literally premiered dated. Third, and most important of all, Hollywood needs to get its act together. Not only are remakes lazy, but a Now and Then remake would be a total cop-out. They’re supposed to be making more movies about women, not the same ones over and over again. Off the top of your head, name your favorite movies about female friendships. Now try to name a few that involve teenage girls. Struggling, right? So am I. They’re few and far between.

While there are tons of movies about teenage girls, they tend to be alllllll about the boys. It’s so rare to see movies that showcase teenage girls working together (and not backstabbing each other in the process). Now and Then is one of those rare films that manages to feature four young women who help each other simply because they like each other. In a world where young women are constantly being told that their ultimate goal is to be desired by a dude, this movie tells them otherwise.

So I know what you’re saying now. “If you’re so in love with this movie, why are you so against a remake?” I’ll tell you.

Because I truly believe that Hollywood can put their heads together and come up with another movie about female friendship. (I know, I’m getting crazy here.) If the director and the writer are willing to collaborate again on a movie, that’s awesome. I’d love to see what else they could make together. If it’s half as good as Now and Then, we’re all in for a treat. After all, today’s young women deserve their own movie about female friendships in addition to Now and Then. I remember how slumber parties work — there will be plenty of time to watch both. 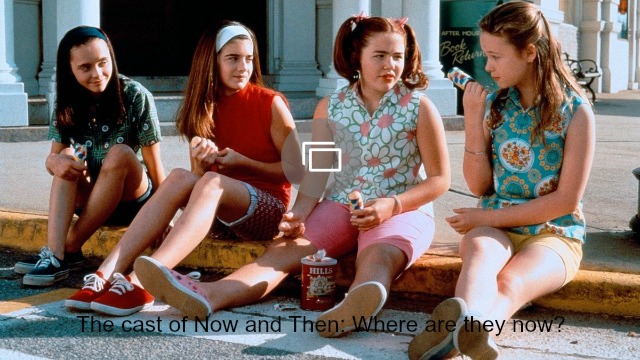