British actress Gemma Arterton made a splash in 2013’s Hansel & Gretel: Witch Hunters, opposite Jeremy Renner. Now she’s back with a film called The Voices, also starring Ryan Reynolds, which is an absurd, dark comedy you won’t want to miss. 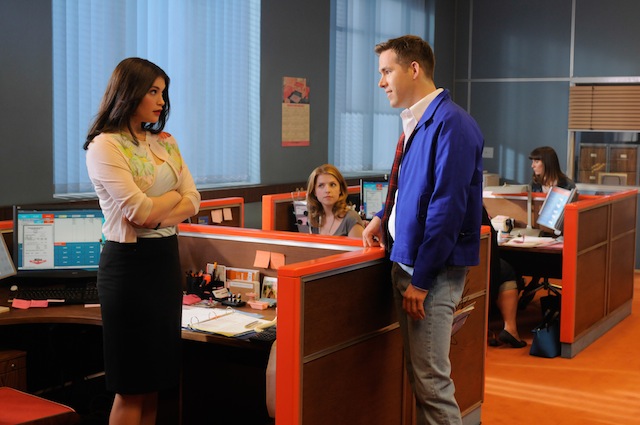 The Voices is the story of Jerry (Ryan Reynolds), who goes off his meds and gets coerced into doing terrible things by his manipulative talking cat, Mr. Whiskers. We don’t want to give too much away, but if there’s ever been a laugh-out-loud comedy about a serial killer, this is it.

Gemma Arterton plays Fiona, one of Jerry’s coworkers, who meets a tragic fate at the hands of the seemingly sweet Jerry. For Arterton, the best comedy comes out of the darkest places.

“A lot of comedians are quite dark people. The script was really appealing to me because I’m not often considered a funny person or asked to do funny things, but I liked the absurdity of the whole thing.” 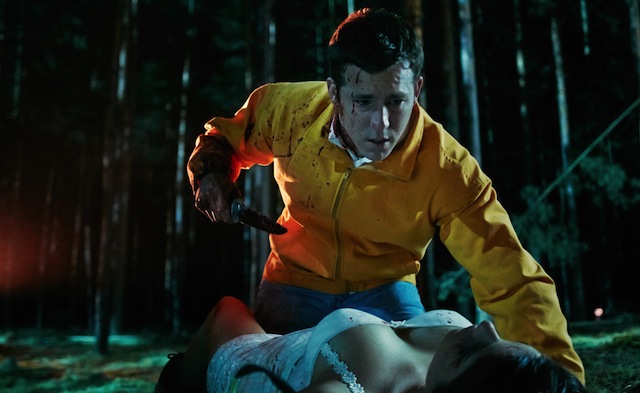 In the film, Fiona loses her head — and we mean that literally. A delusional Jerry kills her and then puts her head in the refrigerator. Every time he goes for a snack, her head begins talking to him. Occasionally, he takes it out and sets it on the coffee table. We had to ask Arterton what it was like to see her own head not on her body. Her answer totally surprised us.

“I loved it, actually. As a female actor, it’s always about the body. For this, it wasn’t at all about that. It was about my face and my mouth and my voice. I couldn’t even move my face that much because it would move my neck. I found it quite liberating in a strange way. I didn’t have to worry about what I was wearing that day or, you know, I was a head in a fridge and it was liberating.”

Well, we’re glad she enjoyed the experience and didn’t come away with nightmares. We also had to ask her about working with the king of rom-coms, Ryan Reynolds. Apparently, it was another great experience.

“Ryan was the most down-to-earth, wonderful human being — the loveliest Hollywood actor I’ve ever worked with. He’s very unpretentious about the way he works, he does a lot of preparation on his own. And then takes it to work, but he’s always fun on set. He had to do some really hard stuff, but he was never difficult to work with. He was always lighthearted and didn’t take himself too seriously.”

We asked Arterton if Reynolds surprised her in any way. She said, “Yes, he’s a real gentleman. It’s rare to find that in actors, being an actor myself, they’re usually quite selfish and egocentric. But he’s not like that. He’s sweet and incredibly funny. I was surprised because I was imagining some Hollywood heartthrob guy who was a little bit up his own butt, but he was brilliant.”

In addition to acting, Arterton has also spoken out very publicly as an advocate for women’s rights, hoping to end the gender wage gap. We asked her why this was not only important for women, but also for men.

“If we want to live in a society where it’s just easier to raise children, we have to create equal opportunities for everybody. My whole journey with the wage gap thing is because I’m in this musical at the moment, Made in Dagenham, which is all about women fighting for equal pay for equal work. And that’s the law in England, but so many women don’t know they are being paid less than their male counterparts because there is no transparency.

“This is definitely a problem in the film industry. We don’t know what we get paid compared to our male counterparts. Threre was this whole hoo-ha when the Sony leaks happened. We live in a society that has advanced so much in terms of what women can do now, but we need to catch up with the way we’ve advanced and that means changing attitudes or just evolving our attitudes.

“In a family, the wife is going to be happier if it can all be shared, if it can all be equal and it’ll be better for the children. It’s ridiculous to me that equal pay is not commonplace.”

Arterton even went before British parliament and got a petition passed, saying, “It’s been great! My inner activist came out.”

We asked if she’d ever consider running for political office. She laughed and said, “I think it’s dangerous when actors want to become politicians.”

That’s fine with us. We’ll continue to enjoy her offbeat movies and exciting performances.

The Voices is available for streaming on Amazon and iTunes.

Angelina Jolie and Amal Alamuddin have 7 surprising things in common

Hollywood’s Humanitarians: This is how Jaime King is empowering children