Episode One of The Great Comic Relief Bake Off was TV gold. It had everything we expect from The Great British Bake Off: puns aplenty, various cake-related disasters, the genius pairing of Mary Berry and Paul Hollywood — with four slightly batty celebrities thrown into the mix. Here are eight of the funniest moments from the first instalment. 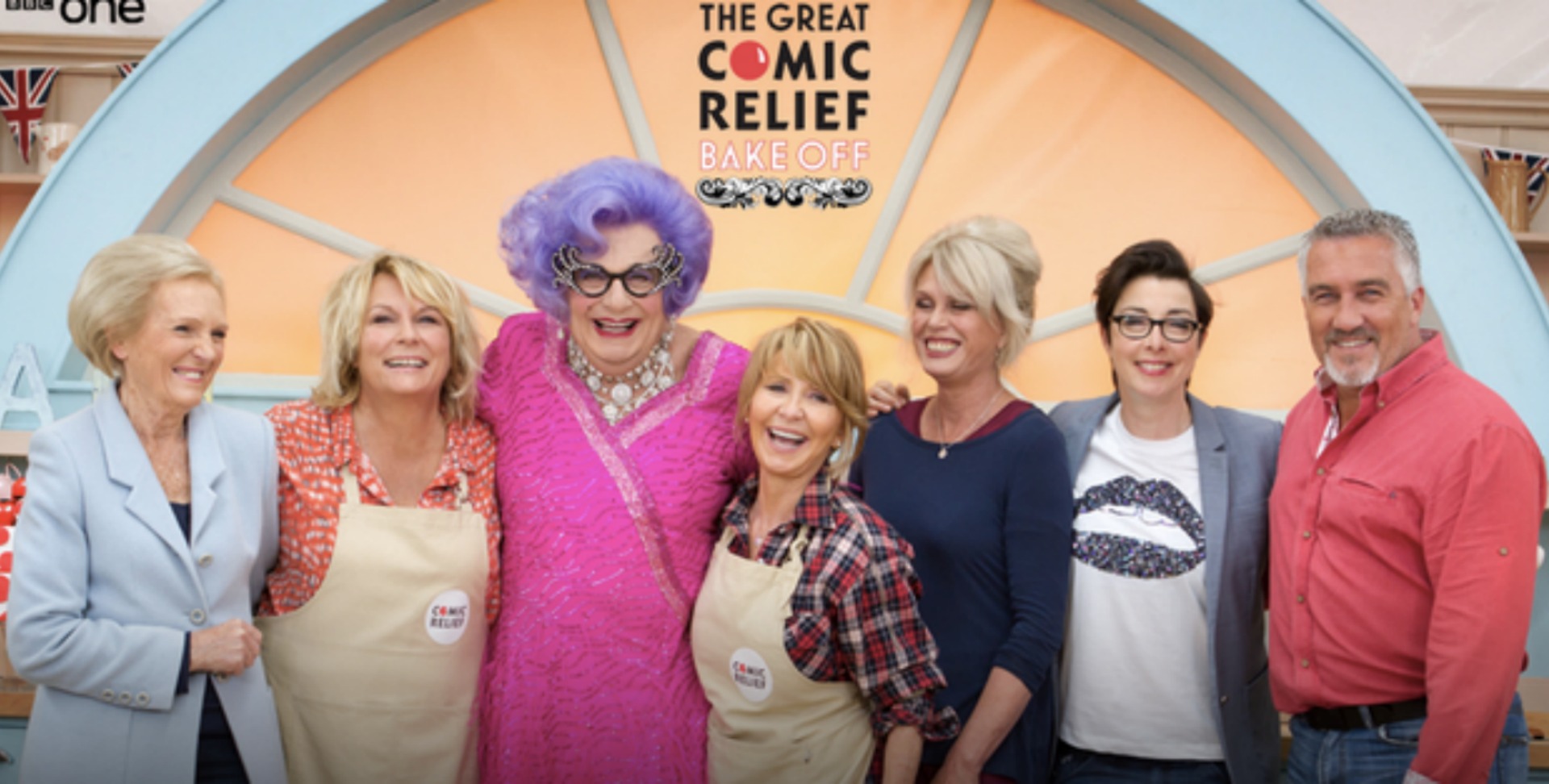 1. Dame Edna Everage’s cookie getting stuck to the tin

It was so bad she actually had to cut the tin off the biscuit. This was after she’d rejected traditional recipes to go with her instincts, viciously attacked macadamia nuts with a rolling pin, refused to follow icing rules and declared that her work in progress looked “rather nice.” (It didn’t.)

“I know the other three — that should hopefully be fun, unless they’re competitive,” Lulu said at the start of the show. Cut instantly to Jennifer: “I’m very competitive.” Oh dear. During the signature cookie bake she said, “Lulu knows exactly what she’s doing. I’m tempted to go over and turn her oven down.”

3. Lulu getting eggs so, so wrong

Lulu produced the sloppiest pastry dough ever after she added three egg whites to her fruit tarts mixture (the recipe asked for three egg yolks). As she started over, Sue Perkins grapsed the opportunity for a pun: “Are you feeling angry? Does it make you want to ‘Shout’?”

4. The tasting of Joanna Lumley’s cake

Expectations were never high for this cake as Joanna herself declared: “The cake is disgusting.” She then had to tell Paul Hollywood which spot was safe to cut (in order to avoid the makeup mirror she was using as a pond). We knew she’d been a little heavy handed with the baking powder but the extent of it wasn’t revealed until Paul and Mary took the brave step of tasting the cake. “It’s burning my tongue,” Paul said.

Much to Berry and Hollywood’s despair, Saunders decided to use baking powder in her toast-shaped cookie. She then watched in alarm as it ballooned before her very eyes. “It’s getting bigger by the second!” she exclaimed. (Nudge, nudge, wink, wink.)

For the showstopper chocolate cake challenge, Dame Edna decided not to use chocolate: “Fairly standard — eggs, flour, sugar.” She was persuaded to add chocolate and Mary suggested a way of avoiding another tin-sticking nightmare. “You’re not just a pretty face in a cashmere suit,” Dame Edna replied.

7. Lulu getting stuck in her bottomless cake tin

Even a tiny person like Lulu shouldn’t get stuck in a cake tin. But somehow she managed it, providing everyone with some light relief and diverting attention away from soggy pastry, collapsed cakes and burnt tongues.

Obviously aware of how much fun Mary is after she’s had an alcoholic beverage or two, Jennifer had filled her showstopper chocolate cake with vodka buttercream. “Hold my hand,” Mary told Sue as she braced herself to dig in.

Episode Two’s contestants Gok Wan, Jonathan Ross, Abbey Clancy and Zoe Sugg — also known as internet sensation Zoella — have a lot to live up to. The Great Comic Relief Bake Off continues on Wednesday at 8:30 p.m. on BBC1.

Does Spitting Image have a place on our TV screens in 2015?
8 Reasons RuPaul’s Drag Race must come to the U.K.
Why Katie Price was the right person to win CBB