Angelina Jolie, Brad Pitt and their brood have been hitting the beach in Australia this week and will be staying here to celebrate Christmas. But they’re not the only celebrities who are looking forward to a hot Australian summer this Christmas. 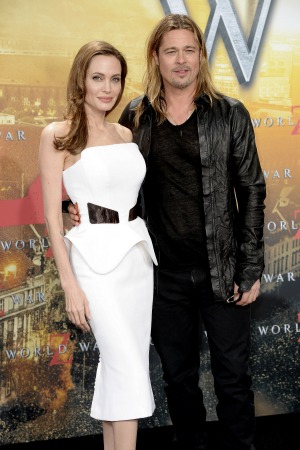 While Angelina Jolie and the kids have been primarily based in Australia for the filming of Jolie’s latest project, Unbroken, Brad Pitt has flown in to see them at any moment he can.

Spending most of his time in London for the shooting of a new film, Pitt’s taken time out to see the family and they were all recently spotted boating on the Coomera River in Queensland.

Jolie, Pitt and their family of eight aren’t the only celebrities who are spending their Christmas in Australia. These stars are also looking to enjoy the hot Australian festive season.

Hugh Jackman and his family arrived in Sydney last week and will be spending Christmas there with Jackman’s extended family.

The Wolverine star, his wife Deborra-Lee Furness and kids Oscar, 13, and Ava, 8, flew in from New York, and as soon as the family touched down, Jackman and his son made their way to Bondi Beach for a swim — the perfect way to spend the festive season in Australia.

Jessica Mauboy will be in town for Christmas, too, and she plans to go home to Darwin to do “the usual thing with family”.

“It is definitely a special time as it is one of the only times in the year I get to sit down and have a good laugh and gain that beautiful energy again,” the singer says. “I think by the end of it you just want to do nothing and go back to basics.”

Model Jess Hart is trying to take time out of her busy schedule to get back home to Australia as well.

“Christmas means a day off. It’s family,” the model said during an interview.

“When it is summer for us, we still put snow on our trees. That is funny to me. It will be nice to be home in the summer and have seafood instead of turkey,” Hart says.

Where will you be spending Christmas this year?

The most fashionable men of the year
Katy Perry, Rihanna and the best collaborations of 2013
Bindi Irwin and young stars who are all grown up