It’s the confirmation we’ve all been waiting for and who better to hear it from than Prince William himself? 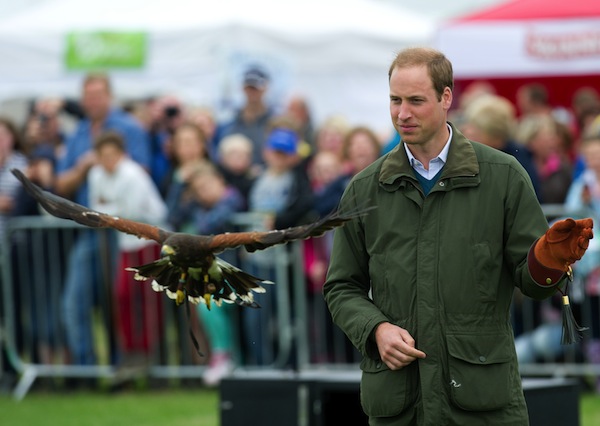 We’re talking about a visit to Australia by the Duke and Duchess of Cambridge and their newborn son Prince George, of course!

There’s been a bit of speculation that Prince William would make a visit Down Under next year with his child, reminiscent of the visit he made as a baby with his mother Princess Diana and father Prince Charles in 1983.

However, now the Prince has spoken in public about the new family’s desire to make the long trek down to one of their Commonwealth countries.

The 31-year-old attended a County Show in Anglesey — where he and Kate have lived in privacy since 2010 — and revealed that he would be leaving his post with the RAF there next month.

While that’s sad but expected news for the locals, the attention of the excited crowd was all on the royal’s latest arrival.

South Australian tourists Max and Maxine Davies were at the show and got a chance to speak to Prince William, promptly talking about baby George.

The Prince didn’t hesitate in saying, “George is doing really well, thank you. We are all very hopeful of coming to Australia next year.”

Mrs. Davies expressed their excitement to the Daily Mail, telling the reporter, “We are on holiday here and can’t believe we got to talk to him. How wonderful that the family will come to Australia to visit. He said he was very hopeful of coming next year with the family.”

Now, that conversation exchange is as good as confirmation for us royal fans!

The new father also revealed that becoming a parent has been the biggest challenge he’s ever faced. While talking about the Duchess’ absence from the show, he said, “… [Catherine] and George would have loved to have been here. He’s pretty loud but of course very good looking!”

“I have to say that I thought Search and Rescue duties over Snowdonia [in Anglesey] were physically and mentally demanding, but looking after a three-week-old baby is up there!” he joked.

No details have been revealed about what Prince William will do once his time is up on his RAF post in Anglesey, however, many think it’s time he and his wife stepped up their royal duties as the Queen pulls back from public life.