Brad Pitt has popped Down Under and attended the premiere of his movie World War Z overnight, however, he was solo, with Angelina Jolie believed not to have made the long flight here. 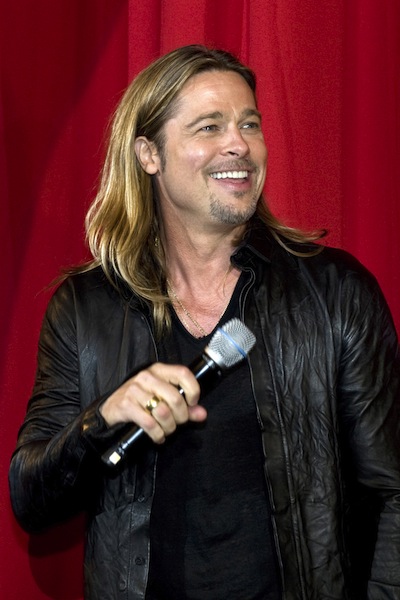 The long-haired heart-throb was ever the perfect red carpet star, stopping to talk to screaming fans and waiting journalists.

He paused to talk to news.com.au, saying, “It’s [Sydney] even better than it looks on TV,” but couldn’t divulge if he’d be back for any filming.

“We have to go where the work takes us, but we’d like to,” Pitt said.

Speaking of his “we”, he made the fleeting visiting to Australia with only one of the six children he has with Jolie. His son Pax, 9, was the lucky one to fly in and out.

Pitt also joked with reporters that he and his son were here to try some local grub.

“We’re in and out here. We’re in here for a BBQ and then out to South Korea for another BBQ to compare. We’ve had good fun.”

Aussie film fans can see Pitt at work when World War Z hits local cinemas Jun. 20. Sadly though, don’t hold your breath and expect to see the star pop into your theatre like he has been doing in the U.S. Pitt wanted to mingle with his fans and made surprise visits to four cinemas that were hosting preview screenings in Atlanta, Philadelphia, Chicago and Austin last week.