Glitz, glamour and Australia’s favourite A-listers were rolled out for a Qantas party in Sydney last night and among the invitees were the airline’s most famous ambassadors, John Travolta and Miranda Kerr. 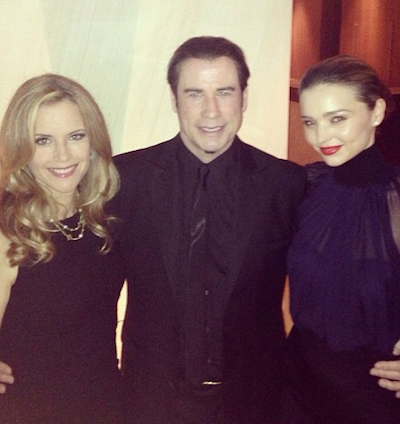 The Aussie carrier went all-out to celebrate its new Emirates partnership and bold new uniforms, under the appropriate setting of their A380 hangar.

Around 1,000 VIP guests hit the red carpet, including Kerr, Travolta and his wife, Kelly Preston. It didn’t stop there though with dazzling entertainment from Tina Arena and Sarah DeBono.

Stopping for a quick interview, Preston gushed about her love for her 59-year-old husband. She told news.com.au that, “He’s a hottie, always. We’ve been married for almost 22 years and he’s just a wonderful person.”

See what you can do on a family holiday in Sydney >>

Meanwhile, Kerr is now hot-footing it back to Los Angeles to celebrate her 30th birthday with her husband, Orlando Bloom, and son, Flynn, this weekend.

The model has been making headlines recently with speculation surrounding her future at lingerie company Victoria’s Secret.

She has since confirmed that she will be moving on from the brand, telling the Sydney Morning Herald that, “This is a natural evolution. The thing is, I’ve been modelling since I was 13. I’m now entering a new phase in my life. I have felt this coming since my son was born and, after I became a mother, I realised I needed to prioritise my time.”

Kerr is currently working on her second book, a follow up to Treasure Yourself, and has a natural skin care range, Kora Organics.