Ellen DeGeneres has been forced to postpone her trip to Australia after being struck down with a nasty bug. Don’t fret though, the trip’s only been delayed by few days! 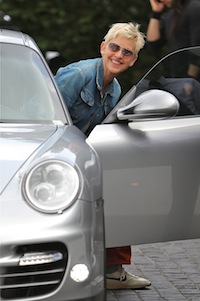 The talk show superstar and wife Portia de Rossi were set to touch down early next week, but due to a bad case of the flu, DeGeneres has been forced to delay her trip Down Under.

“The Ellen DeGeneres Show will delay its arrival into Australia by a few days while Ellen recovers from the flu,” a statement from Warner Bros. said. Ellen will meet her fans in Sydney later next week, and will then head to Melbourne. More announcements about the trip will be made in coming days.”

It’s kind of ironic that the visit has been postponed due to illness as Swisse Vitamins is responsible for getting her here. The deal is part of a promotional tie-in as they attempt to crack the US market through association with the 55-year-old.

“Trying to get over a bug before I go to Australia. Nobody wants to be down under the weather,” she joked on Twitter before adding, “Between my humidifier & Portia making me tea non-stop, there’s so much steam coming from our house people think we picked the new Pope.”

DeGeneres and crew were making the trek to Australia to film segments in Sydney and Melbourne for her daytime talk show (which airs on Channel 9 and Arena every weekday) and to meet with Prime Minister Julia Gillard to discuss gay marriage.

Even with the flu, the comedian still hasn’t lost her great sense of humour.