Hooray for the Aussies! Aside from getting a star on Hollywood’s Walk of Fame, Hugh Jackman has been nominated for a Golden Globe, alongside fellow Australian actors Nicole Kidman and Naomi Watts. 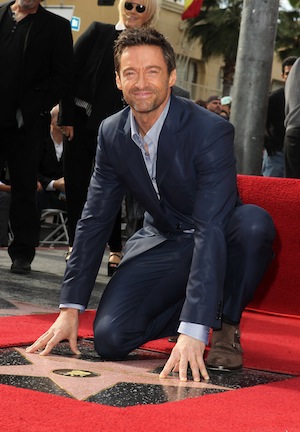 Jackman, who was also nominated for a Screen Actors Guild Award earlier this week, picked up a nom for his role as Jean Valjean in the big-screen version of the hit musical, Les Miserable.

“I’ll probably always remember Thursday, December 13 and I think I’m either going straight from here to buy a lottery ticket or to a casino, because it just feels like someone is looking down on me in a very nice way at this moment.”

He may joke about trying his luck in the lottery, but it’s not because the Aussie action man needs the money: These days, the 44-year-old star is rumoured to command up to $15 million per movie!

“I’m excited,” he adds about this Walk of Fame star.

“The star is right here, outside where I got to host the Oscars, and if the movie gets nominated [for an Oscar], it’ll be nice to get up there and show a little bit of the show to everybody.”

Nicole Kidman was also over the moon to be nominated for her movie The Paperboy, a flick in which she pees on Zac Efron (you read the right!) and her TV movie Hemingway & Gellhorn.

“As an actor, you look for roles that are rich, complicated, and that stretch you and this year I was blessed to find two,” Kidman says.

“To have the chance to play them was a gift in itself and to then be acknowledged this way is icing on the cake.”

Watts has been nominated for Best Actress for her starring role in the movie The Impossible, based on a real-life family’s story during the devastating 2004 tsunami.

Discussing the nomination on the US Today Show, Watts says she let out a “little yelp” when her nomination was announced.

“It’s my son’s birthday today,” she says. “He’s upset that I made that yelp. I had to explain what it was. Mummy got good news. And he said, ‘It’s my birthday. We’re having cake after school. It’s all about Kai today.’ I won’t get to celebrate until this weekend.”