P!nk is heading back to Australia in 2013 on what is shaping up to be the biggest tour this county has ever seen. Speaking of shape, she’s revealed how she keeps fit despite eating whatever she wants! 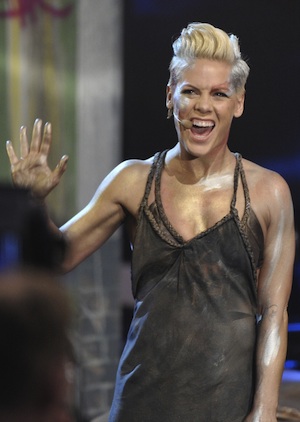 “I have to work out a lot. That’s the only way to do it,” she admitted to Britain’s The Mirror. “I do an hour and a half a day for five days a week plus all my rehearsals.”

However, the singer admits that if you want to replicate her toned stomach, it’s going to take dedication.

“If you want sick abs you need to hang upside down by your feet and do sit ups,” she explains. “You have to. And you can’t cut corners.”

But for all of the exercise advice, P!nk says she’s just like the majority of us and is driven by food.

“I’m terrible when it comes to food,” the 31-year-old said. “I’m the kind of girl who says she’s not going to eat bread and then I eat an entire loaf. Like some old chuffer.”

Her love of food escalated dramatically when she was pregnant with her daughter Willow.

“I put on 60 pounds and I was huge,” she revealed. “I used to eat entire buckets of chicken wings and once I ate an entire cheesecake in one sitting.”

With her upcoming tour of Australia adding dates left, right and centre (at the time of writing she was up to 42 dates nationwide), P!nk admits that the pressure is on to deliver a show that’s bigger and better than her last lap of the country.

“I have no idea how I get insured,” she jokes. “I have to show them option A, B and C in any given situation. I need to show that I won’t die. So it’s a case of me saying if this rope fails me then I can jump on to that rope and I won’t kill myself. I always try my hardest not to die.”