Rihanna’s had a busy week touring the globe along with a plane load of journalists from around the world, but it took a naked Aussie to gain the attention of the world media and upstage the popstar herself! 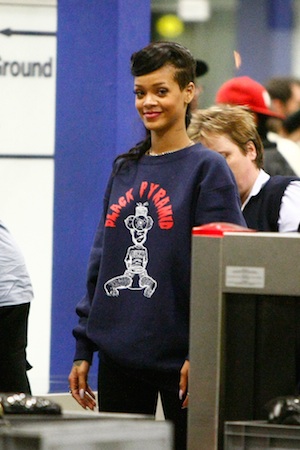 To promote her seventh album, Unapologetic, Rihanna’s covering seven countries in seven days doing seven shows for her fans. However, the journos on board are less than impressed with their experience as their hostess sits in first class and is yet to mingle back in economy.

Additionally, at each of the stop-offs, Riri has been whisked off in limos to five-star hotels to drink champagne and have massages, while the media has been bussed to backstage areas and fed “rubbery turkey, greasy green beans, German pasta, and stacks of donuts.”

The popstar had promised that there’d be plenty of facetime with her during the sojourn, however, when this didn’t eventuate the media revolted.

Chanting “Rih Rih! Rih Rih!” and “interview!” the media on board demanded to see more of the star they were there to cover (most having only minor sleep over the last week while taking part in the tour).

However, it was Aussie “shock jock” Tim Dormer who’s managed to get more attention than the popstar, after he stripped off and ran naked through the plane!

“Sometimes doing random things without thinking isn’t the best idea. YOLO,” he tweeted. “At least my arse is now famous. If only I’d of fluffed before I ran. Hopefully all this shame will land me something!”

Dormer has also put the nudie challenge out to Rihanna saying, “Word from @Rihanna’s entourage is she’s impressed with my nudie run, no word yet if she will accept my challenge for a dual streak!”

Overnight, Dormer has become a media sensation, doing interviews for most of the journos on board, as well as back home for Australian TV and radio, but he’s also thinking of starting up his own business on the back of his newfound fame.

“Hire a streaker, I love it!!” he responded to a follower’s suggestion. “I’m making business cards as we speak.”