It’s taken a few days, but Melissa George has finally backtracked and released a statement about her recent outburst after crying foul for being asked about her days as Angel Parrish on “Home and Away”. 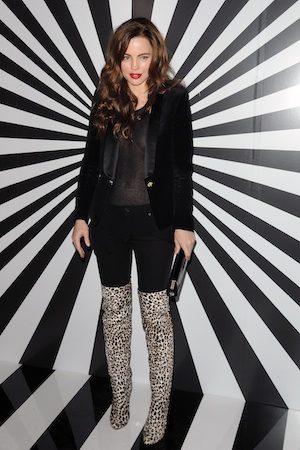 “Right behind my head was [sic] pictures of Angel and on the montage they called me Home & Away actress Melissa George,” George was quoted as saying backstage after an interview with The Morning Show on Channel 7. “Now it’s because it’s Channel 7 so my next call will be to Home & Away to ask them to pay me because nobody does more promotion for that f***ing show than me.”

But wait, there was more.

“I’d rather be having a croissant in Paris or walking my French bulldog in New York City. I’m not going to be a good Aussie anymore,” she continued. “I’m going to speak out. I’ve just had it. It’s disgusting. I’ve never spoken out about it because I have to be the loyal good Aussie who goes away and comes home but I’m really hard-working and people have to respect me for what I’ve done.”

Naturally, the outburst caused an online backlash and prompted George to take to her Twitter.

“It’s not that I am forgetting where I came from,” she tweeted. “It’s that I was home to raise money for mchappy day and channel 7 only spoke of H&A. It’s 20 years ago. I always embrace the past, am used to being mis quoted [sic], and love my fans, but the tall poppy syndrome is pushing us away.”

However, George and her team obviously felt this wasn’t enough and that a proper statement was in order.

“The events of the week have upset me and I want to apologise to any of my fans who were offended about my comments about Australia last weekend,” she explained. “It was never my intention. I’m really proud of my Australian roots and I will continue to come home often to see my family and to work here. In fact my favourite croissants in the world are at the Bourke Street Bakery in Surry Hills.”

She added, “I’m also proud of my early work in Australia and am always happy for people to refer to Home and Away, but what I really want to be able to talk to my fans about is the work I’m doing now.”