Pink’s in the country doing her thang, touring around and promoting her new album but then someone had to go and ruin things by egging her house. 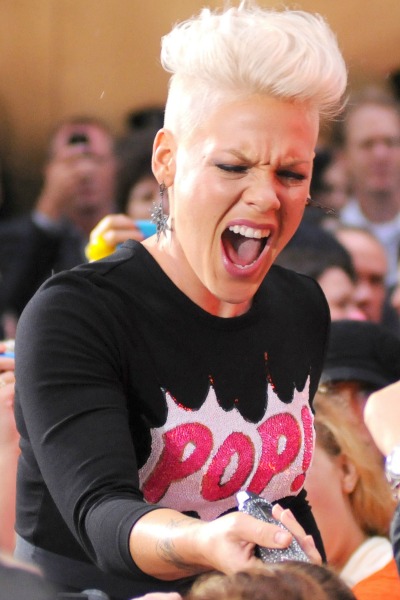 You’d think we’d be all like “Pink, you’re awesome we love you”, but apparently not for some.

It was supposed to be a night of celebration, too, as her new album The Truth About Love hit the top of the US charts, her first number 1 album in 12 years.

This is a big deal, people.

But someone caused a bit of a kerfuffle by throwing eggs at the house Pink is staying at on Sydney’s northern beaches.

Not cool, whoever you are, not cool.

And if you’ve ever listened to a Pink song, you’d know that she is a woman not to be messed with.

Pink let her fans on Twitter know what was going on.

“We got a lovely welcome to the neighborhood last night with a dozen eggs thrown at our door!”

She also added, “But we also got an Anzac slice so it’s all good.”

If she’s still happy to stay in the country after such a welcome, the pop star will be spending the long weekend with hubby Carey Hart and daughter Willow before beginning the promotion of her album.

She’s appearing and performing on the Today show on Tuesday and there has also been the odd rumour that she might even be doing a secret concert, but music insiders have been tight-lipped to avoid any fan mania.