Jennifer Lopez, Jenny From The Block or just plain JLO — whatever you want to call her – has announced that, for the first time in her musical career, she’s coming to Australia for a national tour! 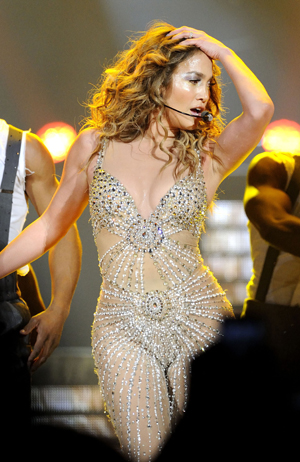 The 43-year-old mother of two, who this year was crowned the #1 Most Powerful and Influential Celebrity In The World by Forbes Magazine, is bringing her Dance Again World Tour down under in support of her greatest hits collection of the same name.

“I can’t wait to get to Australia and that side of the world,” she said of the tour’s announcement. “We are going to dance and sing all night.”

With seven studio albums and her “best of” collection notching up over 70 million record sales worldwide, Lopez promises to belt out all of the hits from the past 13 years, including “Waiting For Tonight,” “Jenny From The Block” and last year’s smash with Pitbull, “On The Floor.”

“This is my first time,” she told Ryan Seacrest of the tour. “My fans have waited a long time for me to go on tour, and this is my first big world tour. “

Current boyfriend, 25-year-old Casper Smart, is most likely to accompany Lopez to Australia as her chief choreographer and dancer, a position that brought them together.

“Sometimes I tell her something — you know, give her notes. Sometimes she gives me notes,” he revealed about their working relationship. “But at the end of the day, it doesn’t matter whose position is what, because she’s the boss.”

Now that her time as a judge on American Idol is over and once her world tour wraps, Lopez plans on going back to the acting world for a bit.

“I do miss doing films,” she recently explained. “I feel like the last two years with American Idol, I’ve really, really focused on, you know, my music … It was all kind of very synergistic, it worked really well together. But [film] is something that I really loved, it’s how I kind of started in this business, and it doesn’t leave you. I am an actress, I need to do that too.”

The Sapphires gets Australia’s cinematic gold medal
What you’ve missed because of London 2012
Kristen Stewart cheats, the fans react