Never mind the several strains of cold and flu that are sweeping the nation and keeping half of the country bed-ridden at the moment, there’s another type of sickness that’s gripped Australia this week – BIEBER FEVER! 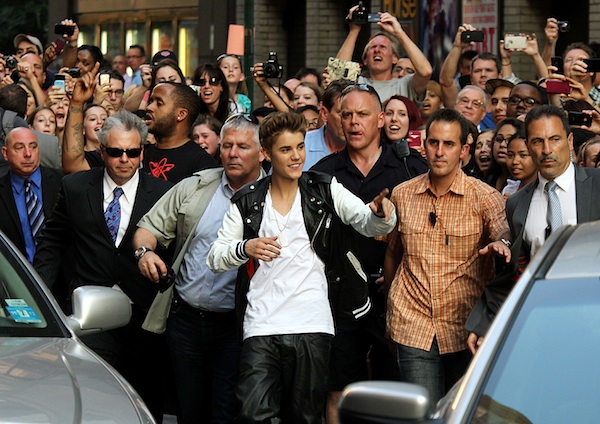 The 18 year-old superstar singer is in the country, with girlfriend Selena Gomez and his mother, for a brief visit to promote his new album “Believe,” cramming as many interviews and live appearances as he can into just three days (as well as a date night with his gf).

It’s all part of Bieber’s whirlwind world promo tour where, according to a press release, in just two weeks he travelled “more than 16,000 miles on 12 planes, 2 buses, 2 fire boats, 1 train and a golf cart through 9 cities in 7 countries performing on 8 TV shows, 4 acoustic album release parties, 2 radio shows for more that 500,000 fans… 100 interviews, 10 meet and greets, suffered one concussion and was the cause of 1 state of emergency.” Phew!

All in all, the Biebs will have covered 13 countries within one month of the album’s release. That’s dedication (and possible if you have the stamina of an 18-year-old!).

He also announced that he would be “coming back in under a year” for a full concert tour of the country.

However, there was one interview in New York that Bieber got his back up. It happened when the jock stated he initially thought Bieber’s song “Boyfriend” was actually another musical Justin – Timberlake.

“Man, that’s crazy because our voices sound nothing alike,” he told Mojo In The Morning. “Saying I sound like someone else is not really a compliment. I think if you were to say ‘I think I heard some Justin Timberlake-esque in your sound,’ I would take that as a compliment. But saying you thought it was Justin Timberlake…”

Well, some nerdy web type has put his money where his mouth is and mashed up Bieber’s Boyfriend and the NSYNC classic Girlfriend (when Timberlake had massively curly hair and Lance Bass had to act straight in the music video) and you know what? They DO sound alike!!

Have a listen and share your thoughts in the comments below.

Ice is back with a Britney Spears reinvention
The Shire: Car crash TV at it’s finest
Lily Allen abused for online abuse