Adam and Emma were eliminated from Beauty and the Geek Australia Thursday. Meanwhile, there were hookups on the show.

The duo did poorly on a quiz against Mackenzie and Jimmy, also in the bottom two. 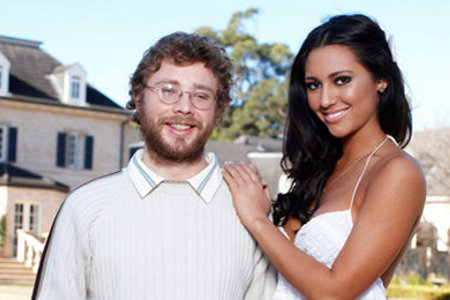 Before she was plunked in the bottom two of the competition, Mackenzie found time to hook up with Troy, who has been making the rounds with beauties since the season started. This turn of events made Troy’s partner, the female nerd Helen, antsy. She thinks Troy’s womanizing is making them eligible to get eliminated. Jimmy, for his part, recovered from the slap of seeing his partner snog another dude.

There was some action between Lachlan and Jordan, who are paired with other contestants, as well, with the two making out hardcore.

Other tasks on the show included each partner having to answer questions about the other, trying to recognize famous faces and a roller derby challenge, which was won by Bendeguz. That geek caused a stir in the media earlier this week when it was revealed that he is a real actor with numerous stage credits. The show has portrayed him as a university student studying acting.

Later in the week, another bombshell was dropped regarding contestant Helen — she has a boyfriend. And not just any boyfriend: he is a world champion Sudoko player from the Netherlands. That’s a lot of brain power between the two of them!

Six contestants in total have now left the show.

An actor among Beauty and the Geek Australia cast

Beauty and the Geek Australia votes off second couple

Male beauty hooks up on Beauty and the Geek Australia