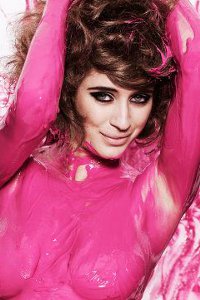 And then there were six.

Madeline Huett was the lone Tasmanian native to make it to the finals of Australia’s Next Top Model. Even though the blue-eyed brunette got eliminated Monday, she has high hopes for her modelling career. Madeline Huett, 22, says she will move to Sydney to pursue more work in the coming weeks.

It might be an admirable attitude, considering she became another contestant to have her body scrutinized harshly, this time by photographer Simon Upton. He told Madeline Huett that her body was “nowhere near the other girls.” Ouch. Maybe a bit harsher than having your body compared to luggage, as contestant Alissandra Moone heard from stylist Alex Perry.

Throughout the show, other judges called Madeline Huett worthless and cheap.

The theme of Monday’s episode was shabby chic. The girls had their hair done up and were painted in pink body paint for their shoots while men in black suits with cameras gathered around them.

A double elimination shocker on Australia’s Next Top Model