It can be tough for a guy to pull off a song originally sung by a girl, and vice versa. But with the right person and the right tune, the performance can rock the house. That’s what Reece Mastin, just 16, found out when he crooned Katy Perry’s “I Kissed ad Girl” and The X Factor Australia judges liked it. 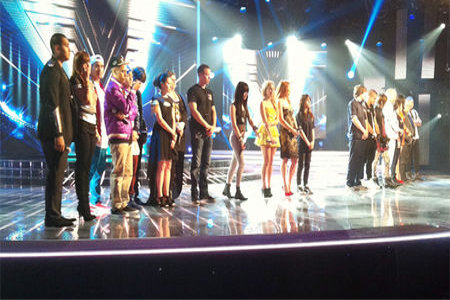 Guy Sebastian’s song choice for his Under 25 Boys contestant initially worried judge Ronan Keating. Reece Mastin, however, apparently hit the notes just right. His confident stage presence didn’t hurt — especially when he smooched a backup dancer at the end of the performance.

This week’s theme on The X Factor Australia was party anthems, and there were different interpretations from each batch of contestants left in the Top 11. Under 25 Girl contestant, Christina Parie, sang “Girls Just Wanna Have Fun” and Young Men Society tried out “You Shook Me All Night Long,” which also turned out to be a hit with the judges. Declan Sykes sang Panic at the Disco’s “I Write Sins Not Tragedies,” a dramatic performance that apparently scared judge Mel B! The judges weren’t so impressed with Under 25 Girl Jacqui Newland, who sang “Heaven is a Place on Earth” by Belinda Carlisle.