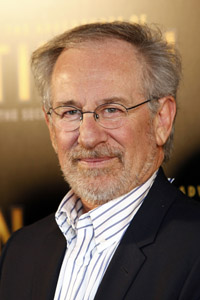 Shot in the Australian wild, Terra Nova brings prehistoric times to the future, with a modern family going toe to toe with the giant beasts. The year is 2149, and a gray, polluted Earth threatens to destroy itself. The family to save the world is Jim and Elizabeth Shannon, a police office and a doctor, respectively, and their three kids. The Shannon family is one of several tasked with going back in time so they can recreate humanity from scratch. Except this time, there will be no smog.

The Terra Nova colony for which the show is named has been overrun with dinosaurs and insurgents.

The show’s shoot in Australia has been a productive one. Shooting covers a few episodes at a time due to the complicated and advanced special effects used. A single episode can take more than two months to shoot. Producer Steve Spielberg has also brought in crewmates from special effects productions like Jurassic Park to make sure this land of dinosaurs looks as authentic as possible.

Terra Nova will air on Fox on Mondays at 8 p.m.

The secrets of special effects