Beauty and the Geek Australia Season 3 debuts as male beauty Troy admits hooking up with beauties.

With tan, chiselled abs (he’s a personal trainer), piercing blue eyes and an arm tattoo, Troy is proving to be like kryptonite for some of the female contestants on the new season of Beauty and the Geek. 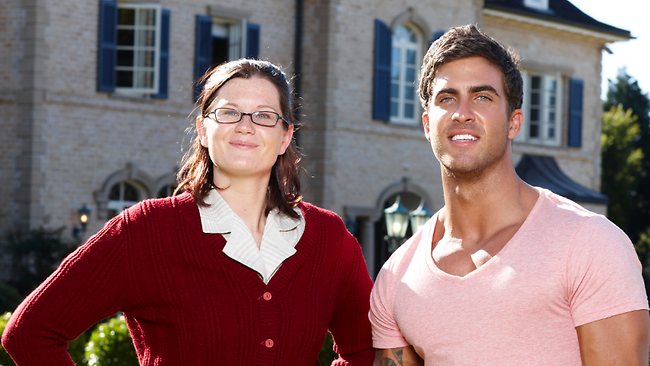 A resident of Bondi in Sydney, Troy, 21, is the first male “beauty” to appear on the American-created reality show. However, he was actually meant to shack up with the first female geek on the show, Helen, 26, a data analyst for the government in Canberra. He revealed to the Herald Sun that he’s still dating one of the two beauties he hooked up with.

The first episode of Season 3 appeared Thursday night at 8:30 pm and ran for 90 minutes. According to ratings reports, it was the top-viewed show in that time slot, even though it brought in slightly under a million viewers. An encore of the first episode will appear Sunday at 10 am in Sydney and Brisbane and 11 am in other areas.

There haven’t been any leaks of lascivious hook-ups on Helen’s end. A math-loving, science-tutoring netball umpire, Helen says on her Beauty and the Geek profile page on Yahoo! 7, “I’m much happier dealing with data because it never talks back to you. It just does what you tell it to.”

The rest of the cast includes nine female hotties paired with nine male nerds. Some of the beauties in Season 3 include raven-haired Darlene, 22, from the Northern Territory, platinum blonde Jacelle, 20, from Victoria, and brunette Mackenzie, 21, from Western Australia. The male group includes bespectacled, suspender-wearing Adam, 25, from Victoria, bow-tied, bearded Jimmy, 26, from New South Wales, and Nathan, 19, from South Australia.