ASHTON KUTCHER IS A HIT

It’s been a long time coming. A ratings hit in both America and Australia, Two and a Half Men was ripped off television earlier this year when Charlie Sheen’s personal life hit the skids. After the show’s star was fired, the scramble to find a replacement produced Ashton Kutcher. 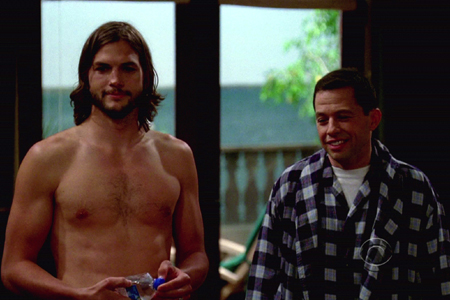 DANCING SHOW WINS IN US

However, in the States, it was Dancing with the Stars that made the ABC network a ratings winner on Wednesday.

With more than 19 million viewers, Dancing with the Stars secured ABC’s spot as the most-watched network of the fall season debut. It is the fourth time ABC has beat out the other networks in the debut of the fall line-up since 2006. Part of the reality show’s allure this season is contestant Chaz Bono, Cher’s daugther, who underwent a sex change.

In Australia, a report SheKnows discussed yesterday showed that Two and a Half Men’s ratings had slipped a bit among Aussies since last year. Two and a Half Men was the No. 1 show watched by Australians in 2010. It became the third most watched, though that may change with the strong viewer turnout for the new season. The show remains most popular among men.

What are Australians’ favourite shows?
Ashton Kutcher debuts in Two and a Half Men
New Dancing with the Stars begins with Chaz Bono