The new season of the reality show includes politicians, athletes and musicians. One of the most buzzed-about is Pauline Hanson, 57, who made headlines a few days ago for washing cars in her underwear in Sydney’s Bondi Beach as part of her first task on the show. She was joined by fellow contestant, former Miss Universe competitor Jesinta Campbell. The female cast is topped off by The Block winner Polly Porter, singer Deni Hines, comic Julia Morris and swimmer Lisa Curry. 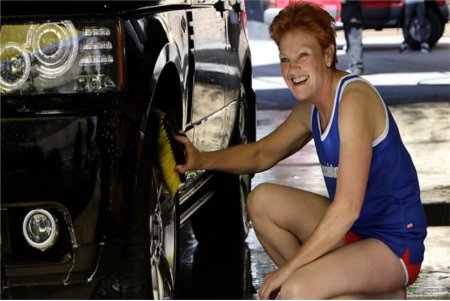 Max Markson, a publicist, model Didier Cohen and former Australian football player Warwick Capper make up part of the male side of the cast. As part of their first task for the show, they along with fellow contestants Wendell Sailor, a former rugby player, Brownlow medallist Shane Crawford and Jason Coleman, judge on So You Think You Can Dance, did charity work in the Sydney suburb of Gladesville.

This week, the contenders are working at two KFC branches as Donald Trump films spots for the season.

Pauline Hanson is set to draw in viewers with her storied career, which has included leading One Nation, a right-wing party focusing on populism and anti-multiculturalism. She has faced allegations of racism for her party beliefs and was also convicted of fraud, but later acquitted of the charges.

This isn’t the first time Pauline Hanson has competed on reality television. She appeared on Dancing with the Stars during her 2004 election campaign and actually made it to the final, though she didn’t win the show.

Chaz Bono convincing on Dancing with the Stars

Melanie Moore wins So You Think You Can Dance